“No person in the United States shall, on the basis of sex, be excluded participation in, be denied the benefits of, or be subject to discrimination under any educational program or activity receiving Federal financial assistance.”

Title IX of the Educational Amendments of 1972

Intercollegiate competition for women became a reality only in the later part of the 20th century after the passage of Title IX of the Equal Opportunity in Education Act of 1972. Prior to this, women competed only in local “sports days” or “play days,” which evolved into intramural and extramural teams. Female educators at the University of Arkansas helped to shape women’s athletics both at the university and in the state of Arkansas. Women’s sports began in what was then called the College of Education, where physical education teachers volunteered their time to coach girls who wanted the opportunity to compete.

In Their Own Words

3.18.22 | Bev Lewis | I Grew Up In Title IX
Former Director of Women’s Athletics Bev Lewis recounts her early experiences as a high school athlete growing up in the midst of a nation-wide women’s movement. Everything from sports – The Battle of the Sexes – between Billie Jean King and Bobby Riggs, to politics with the beginning of Ruth Bader Ginsburg’s career, to music as Helen Ready crooned “I Am Woman” was changing.

4.5.22 | Linda Bedford Jackson | Being a scholarship athlete was just not something we thought about
Former track and field star Linda Bedford came to campus and earned one of the first scholarships for women in the 1970s. She split that with another athlete and was happy to get $250. Bedford Jackson knew things were changing and talks about the foundation for what is now one of the best track and field programs in the nation.

4.10.22 | Marsha Lackey-Vining | We just wanted to win
Marsha Vining walked on to the first University of Arkansas women’s basketball team after the passage of Title IX. It wasn’t easy. They had to fight for court time but it was worth it. Vining reflects on laying the foundation for today’s teams.

5.6.22 | Bev Lewis | NCAA Joins Support For Women’s Athletics
Bev Lewis recalls the NCAA adoption of women’s sports and how Arkansas handled its women’s teams in the early 80s and 90s. At Arkansas we were fortunate but that was not always the case.

6.22.22 | Arkansas Softball | The addition of a new sport
Three of the founding members of the Arkansas softball program reflect back on how it all started and how far it’s progressed.

Athletics for women at the University of Arkansas has featured many memorable moments. Whether it was the joy of championship celebrations, the grind of practice, the challenges of balancing coursework and sport or the laughs shared around the dinner table or on the bus, countless lives were shaped by sport and sport was shaped by the women who played. 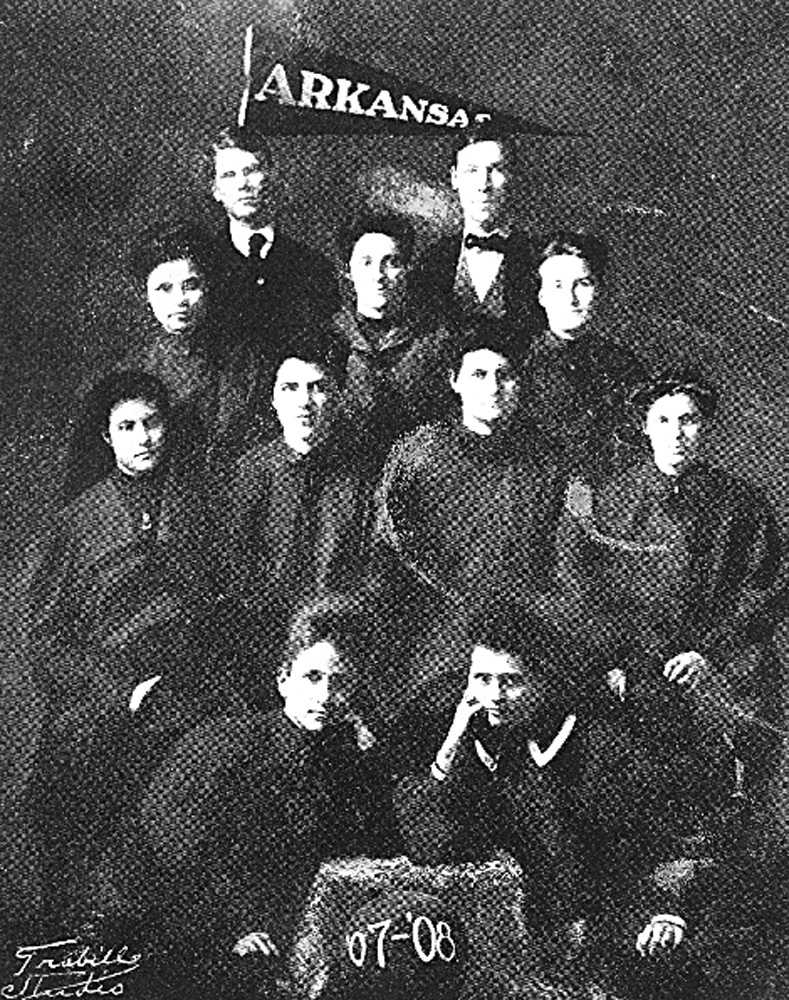 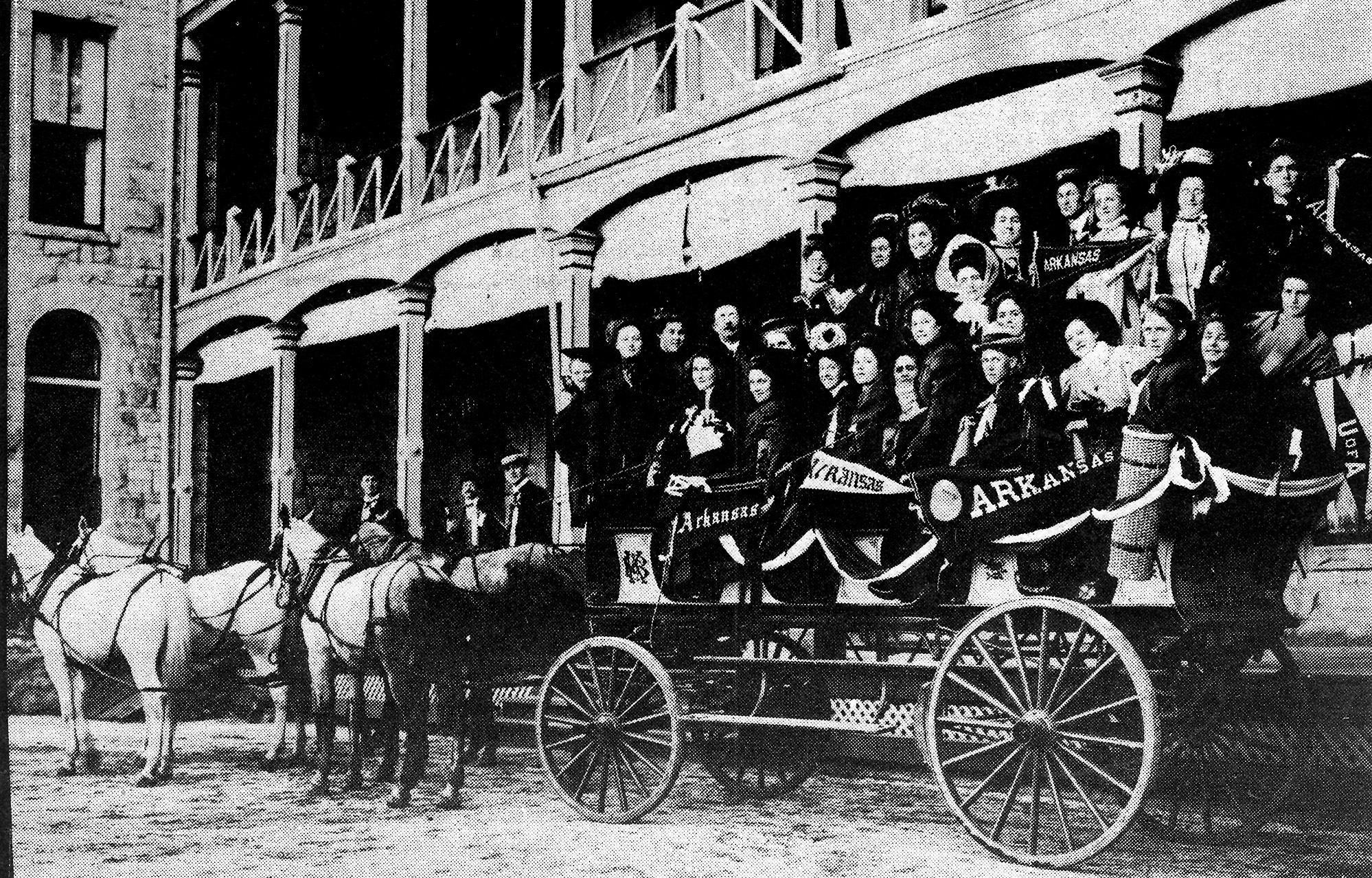 The 1909 extramural women’s basketball team loads up for a road game. 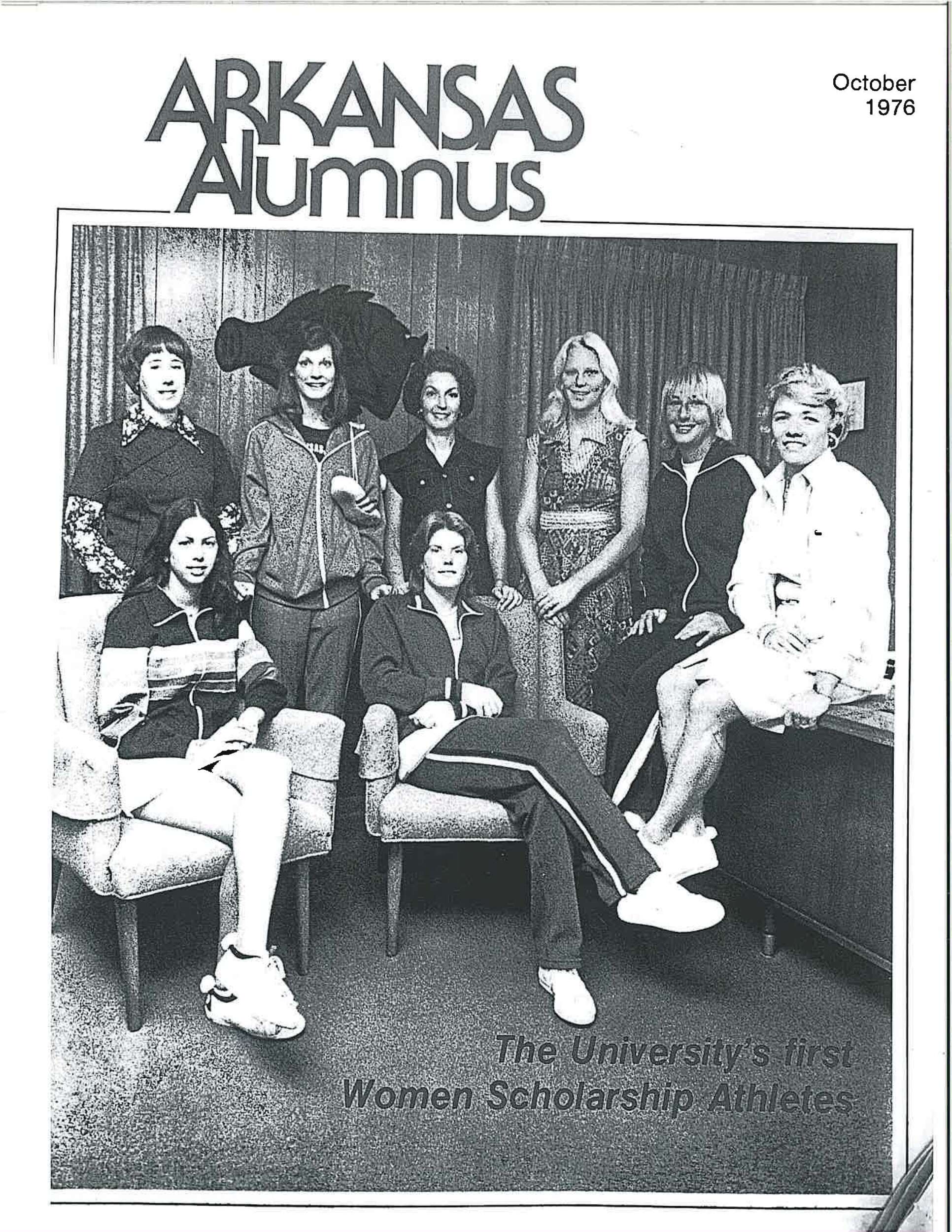 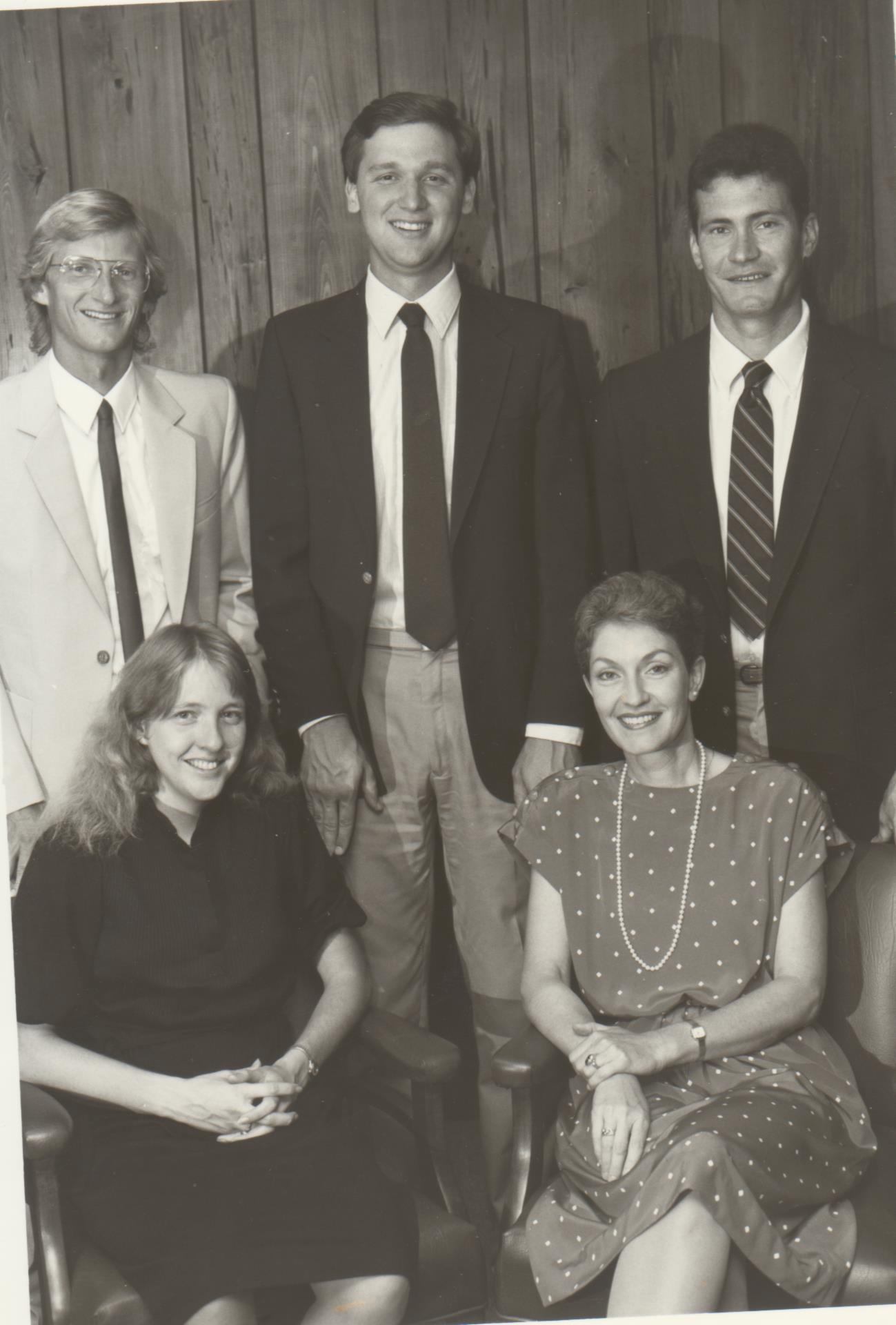 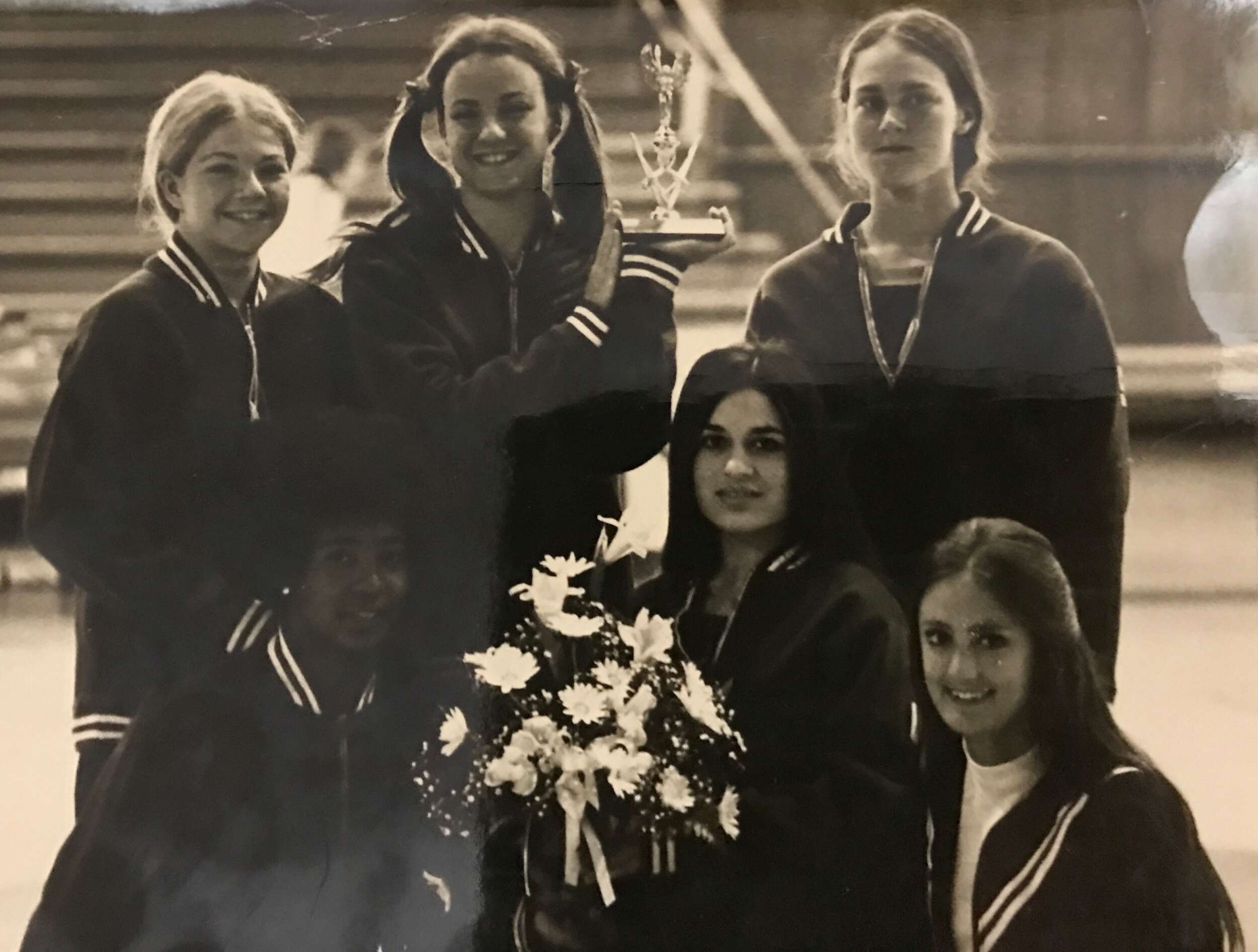 One of the earlies photos of the Razorback gymnastics team from 1972-73. 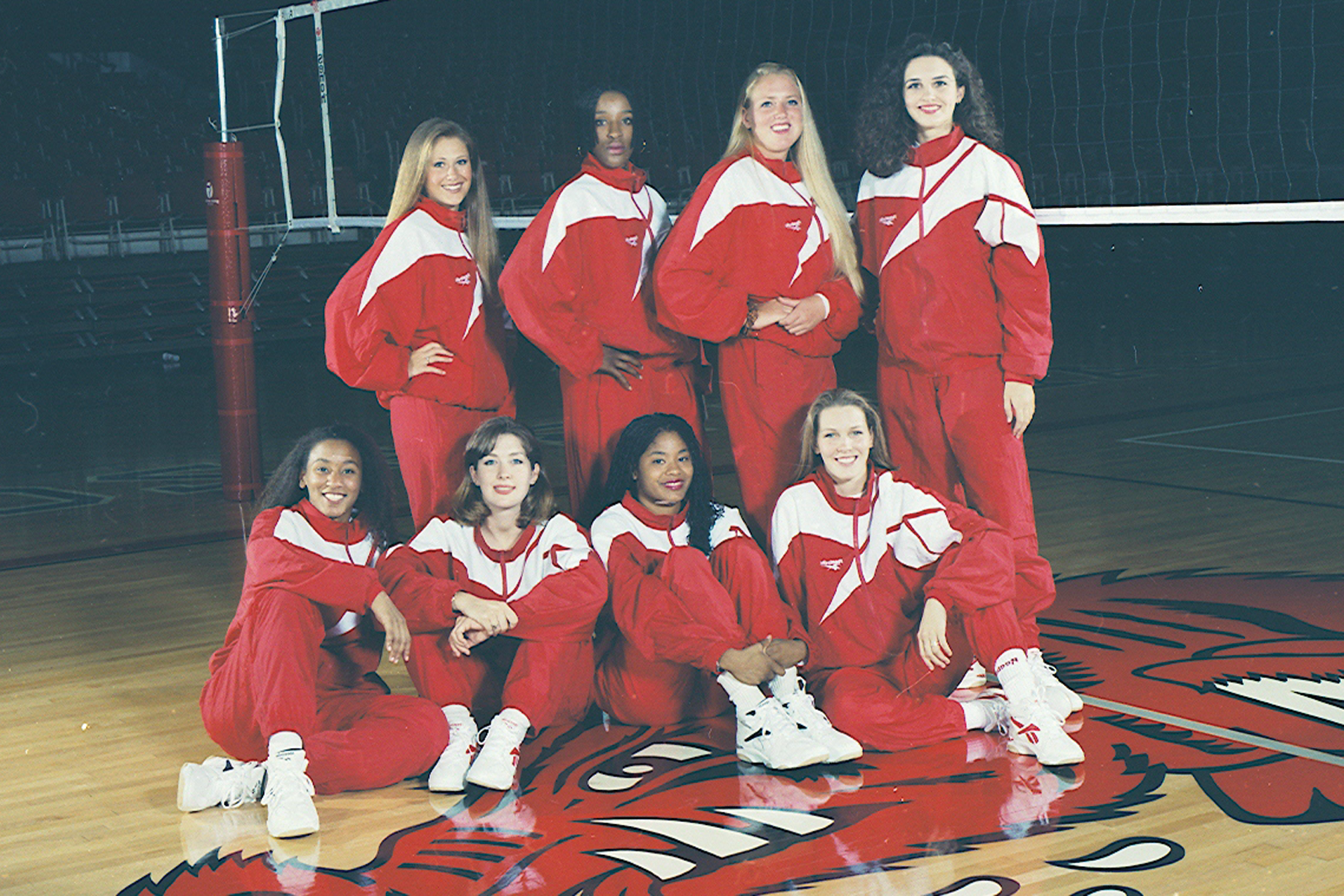 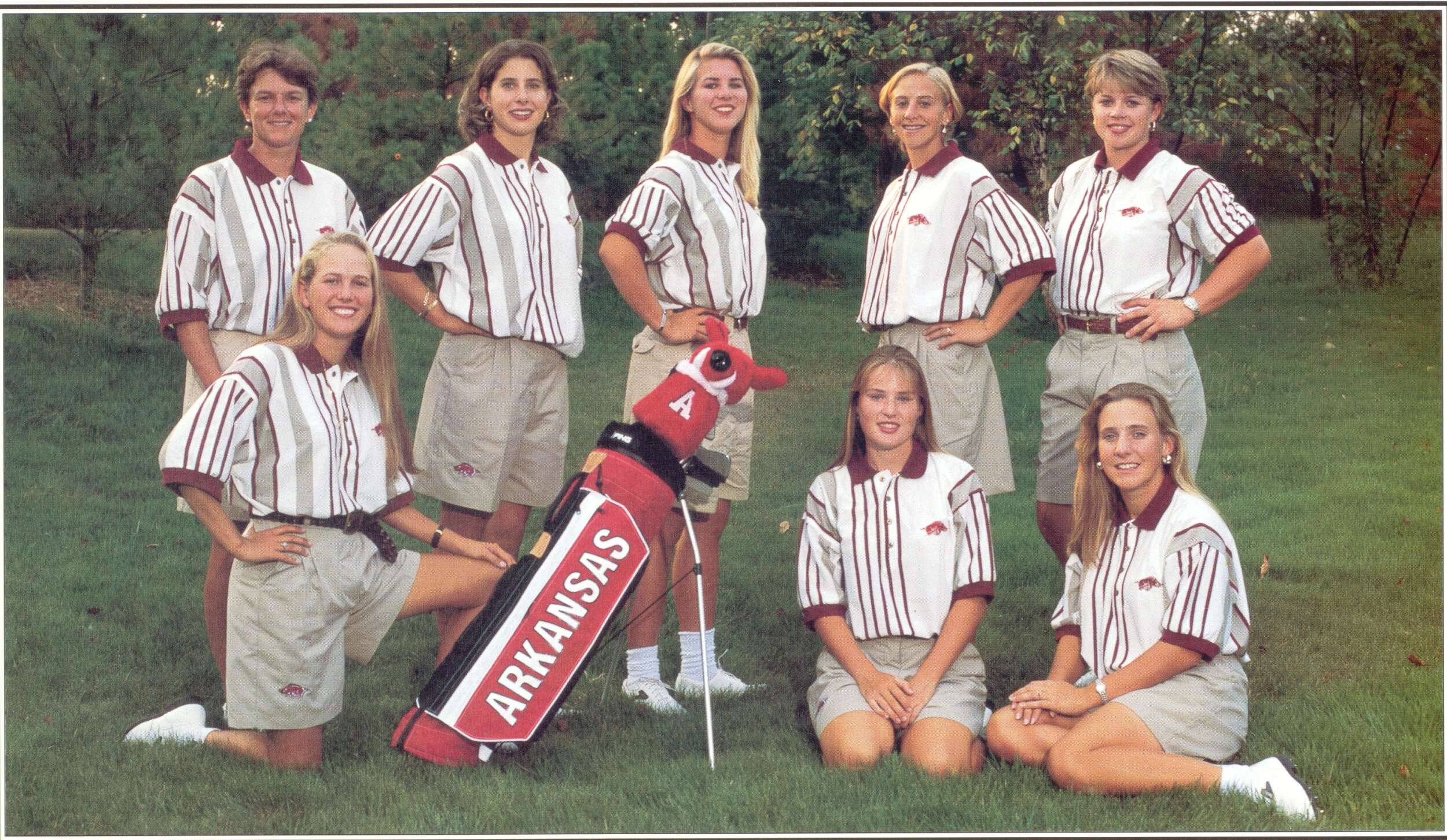 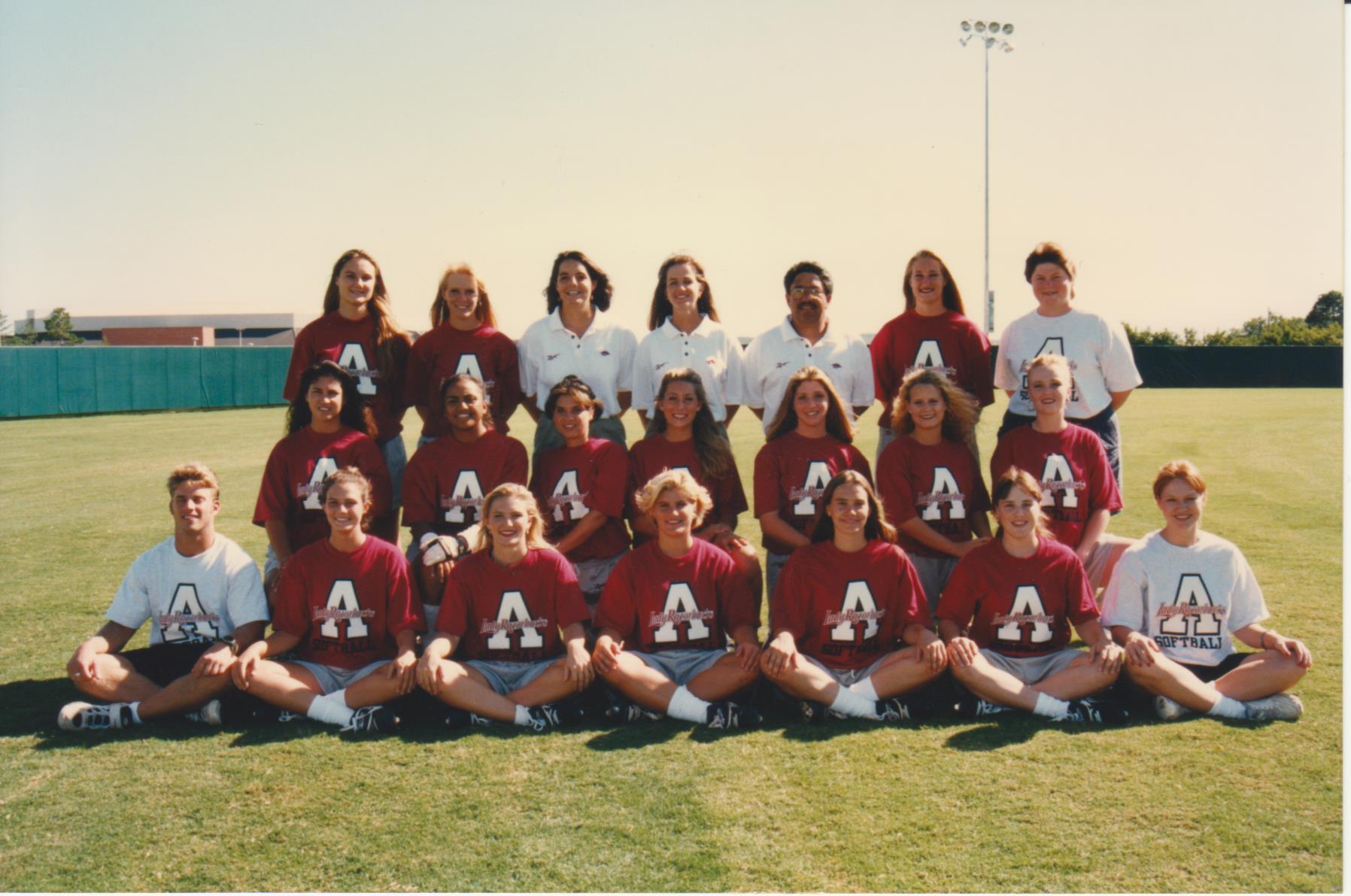 FACILITIES
Check out this great link for a history of our facilities.

Faces Behind The Names

Ruth Cohoon
First director of women’s athletics at the university

Ruth Cohoon joined the university as a swimming instructor in 1965. In 1972, she was appointed director of the first funded women’s athletic program. During her career at the university, she saw the first athletic scholarships offered to female students and coaching opportunities offered to women educators. Cohoon consistently fought for increased funding, better equipment, more scholarships and greater opportunities for women athletes. Learn more about Cohoon here.

Lewis spent 19 years (1989-2007) as the Director of Women’s Athletics and more than 30 years with the Razorbacks. The hallmark of that stint was the overall excellence of the entire women’s athletics program. During her tenure, the University of Arkansas has moved to increase athletic participation for women with the addition of volleyball, golf, gymnastics and softball. All four sports competed in NCAA post-season competition by each inaugural recruiting class’ senior season and have established themselves as nationally competitive programs. Every Razorback women’s sport achieved a new athletic performance pinnacle under her leadership. Read more about Lewis here.

Betsy Broyles may have gotten her athletic genes from her famous father, Frank Broyles, as she grew up playing basketball, baseball and football with the neighborhood boys and helping form the Fayetteville Woodland Junior High School girls basketball team in the ninth grade.  In high school, Arnold ran track and played basketball, where she averaged 29 points per game her senior year. Her obvious proclivity for sports led to other opportunities, including a tryout for the Junior Olympics volleyball team — even though she wasn’t on a volleyball team — and a tryout for the Pan American basketball team. She became a member of the first female recruiting class to receive athletic scholarships as a women’s basketball player at the University of Arkansas, though she initially refused it. But her time on the court came to a quicker close than she imagined. Broyles injured her foot at the end of her freshman year and decided to hang up her uniform. After a brief stint of keeping team statistics, Arnold forfeited her scholarship for another athlete and focused on school. Broyles Arnold currently serves as the President/CEO at The Frank and Barbara Broyles Foundation.  (credit April Wallace and the Arkansas Democrat Gazette for some of this content).

Linda Jackson was one of the first scholarship recipients on the newly formed women’s track and field team. “It was only $250,” Jackson explained, who split half of it with a teammate (she was awarded a full academic scholarship by graduation). It was a blessing for Jackson, she got to do something that she loved. In 1976, women’s track at the University of Arkansas was an NAIA sport, but Title IX brought the team into NCAA competition and gave the team equal resources. Title IX also meant that the women’s track team would be going up against the best in the country. Jackson stepped up to the challenge. She was the school’s record holder in the 60 meters, 100 meters, 200 meters and both relays. The 4×400-meter relay record stood for more than 15 years.

She added to her resume of accomplishments away from the competition stage. As the only African American student in the journalism program at the time, she’s proud of the academic scholarship she gained. During her senior season, she became the first female sports editor for The Traveler, the University of Arkansas’ student-run newspaper. She assumed the position with the stance of increasing the coverage and visibility of women’s athletics, in turn giving herself and all other female student-athletes on campus their due. She was also a founding member of Zeta Phi Beta Sorority Incorporated and was involved at St. James Church.

Deb Thompson served as the first women’s tennis coach from 1972-79. Dr. Thompson passed away on March 1, 2019, after suffering a brain aneurysm. She graduated from Cambridge High School in 1966, and earned her bachelors degree from Kent State University. In 1972 she completed her Masters of Art in physical education from The Ohio State University. Dr. Thompson coached tennis at the University of Arkansas where she earned her Doctorate in Education. She moved to McKenzie, Tenn., in 1982 and taught at Bethel University, where she received numerous leadership awards. Dr. Thompson was awarded the status of Faculty Emeritus before her retirement in 2016.

Raised in Oklahoma, Betty Robinson was first educated in the Lamont Public Schools. When it was time for college she enrolled in Oklahoma State University, but later dropped out to tackle the world on her own. Eventually, she received a degree from a junior college in Texas, a bachelor and masters degree from the University of Tulsa. She then tried her hand at teaching and coaching athletics in Oklahoma. Coaching pulled her to the University of Arkansas where she coached women. Later she completed a masters degree at the University of Central Arkansas followed by a doctorate at the University of Arkansas. While all this learning was taking place she worked various jobs, teaching and administering educational programs. Betty settled on a small acreage near London, Ark., and spent 30+ years as an administrator and professor at the University of the Ozarks in Clarksville, Ark. Upon her retirement, Dr. Robinson was awarded the title of Professor Emeritus of Education. (Source: https://www.amazon.com/Betty-Robinson/e/B001KCNU2C%3Fref=dbs_a_mng_rwt_scns_share)

Title IX celebrations are going on all over the country. Our Southeastern Conference partners are also honoring their histories. Check out there stories here.