Frank Broyles Remembered For Strong Support of U of A Academics

Frank Broyles’ achievements with Razorback athletics are known across Arkansas and beyond.

His accomplishments on behalf of University of Arkansas academics are not as well known as the 55 years he served as coach and athletic director, but they clearly demonstrate his pride in the U of A.

Broyles died Monday at his home in Fayetteville. He was 92.

“For almost 60 years, Frank Broyles has been an indelible part of the University,” said Chancellor Joe Steinmetz. “As our head football coach, and then as our Director of Athletics, Coach Broyles redefined excellence for our athletics programs and, more importantly, impacted the lives of thousands of people. His contributions to the University of Arkansas and to our state are immeasurable, and his passing will be felt by many. On behalf of the university family, I want to extend my sincerest sympathy to the entire Broyles family. His legacy will live on.”

His direct involvement with academic campaigns started in 1982 when he agreed to chair the university’s first major fundraising effort, the Campaign for Books. Chancellor emeritus G. David Gearhart was vice chancellor for advancement at the time: “Through his efforts as chairman of the campaign we added 100,000 volumes to the university library.”

Chancellor emeritus Dan Ferritor, a faculty member when the campaign started, credits Broyles with the success of the $2 million fundraiser.

“From my perspective, Frank’s greatest contribution was his willingness to make a public statement that the academic mission of the university was important and that he was willing to encourage his friends and supporters to give to the campaign.”

It was a powerful message, and when Ferritor was named chancellor in 1985 he turned to Broyles again in a campaign to save Old Main. At that time the signature building on campus had been closed and fenced off for almost 5 years, with little chance for state funds to renovate the building. Broyles agreed to open doors, introducing the new chancellor to friends and supporters.

“We developed a strategy where we would contact these potential donors and say that Dan Ferritor and Frank Broyles would like to see them to talk about an important project for the University of Arkansas,” Ferritor said. “I have no illusion that they agreed because they wanted to see Dan Ferritor. Frank would renew his friendship with the potential donor and introduce me, saying ‘Dan has something really important to tell you about my school.” After I made my case, as we were leaving, Frank would say, ‘I hope you can help us on this. I think it is the most important thing we have going on now and we need your help.’ Was it successful? Go look at Old Main today. I cannot remember how many such visits Frank made, but I do remember he never said no.”

Broyles showed his support in a less public way as well. 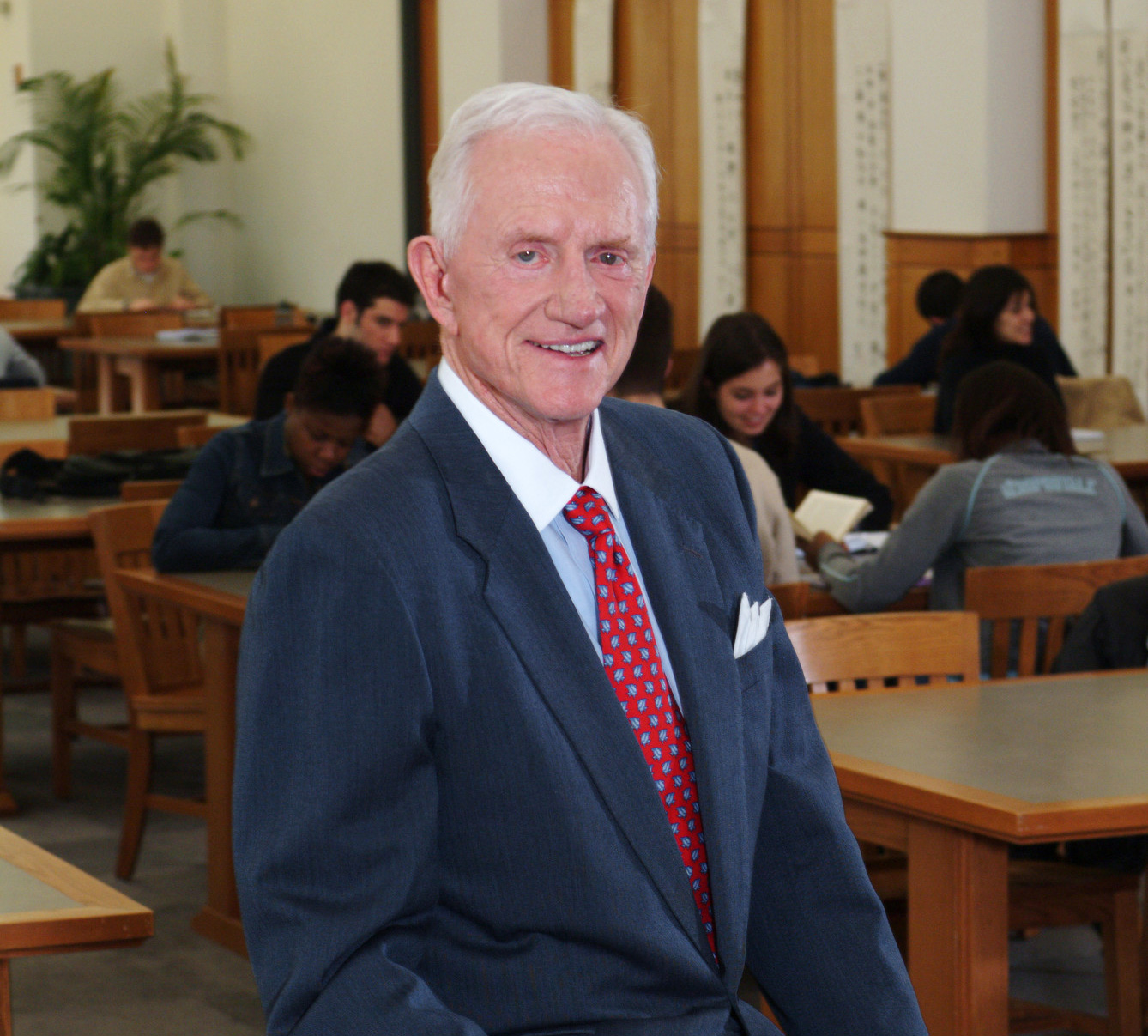 “The state allowed the academic program to transfer $450,000 of state money to the athletics program,” Ferritor said. “Early in my time as chancellor, Frank asked me if we were going to make the transfer and I told him we needed the money to build our academic program. He never asked again. When we won the national championship in 1994, the athletics program received a sizable prize, somewhere around $1 million. When Frank told me about it, I said, ‘our scholarship fund could really use that money.’ It was ours.”

When John A. White was named chancellor in 1997 he, too, found solid support from Broyles. It helped that White had come from Georgia Tech, Broyles’ alma mater.

“He said he wanted the University of Arkansas to enjoy the same level of respect in academics as Georgia Tech, enjoyed,” White recalls. Toward that end, Broyles introduced White to people around the state who had supported the athletics program.

“In the meetings, he encouraged them to support my efforts to enhance the academic reputation of the university. Those meetings turned out to be instrumental in launching the Campaign for the 21st Century. Coach Broyles not only encouraged donors to support academic programs, he also played a major leadership role in the Campaign. Through his contacts, hundreds of individuals who had only provided financial support for athletics began supporting academic programs and have done so ever since.”

Dave Gearhart was back at the U of A by this time, once again as vice chancellor for University Advancement, leading the new ambitious new campaign. Frank Broyles was one of the first people he turned to.

“We asked Coach Broyles to serve as one of the chairmen of the campaign, which ended up raising over $1 billion. This would not have happened without his extraordinary leadership,” Gearhart said.

As co-chair of the University’s Campaign for the Twenty-First Century, Broyles particularly helped with fundraising efforts for the Pat Walker Health Center and the Razorback Marching Band.

Broyles contributed more than his time and effort to the academic side of the University of Arkansas: In 2001, he made a gift of $200,000 to University Libraries for an endowment to supplement collections and purchase library equipment such as digital scanners and microfiche reader printers.

“Coach Frank Broyles has helped build the athletic and academic programs at the University of Arkansas and made incredible contributions to the welfare of our beloved institution,” said Gearhart. “His contributions to this university are unparalleled.  He has also been a generous personal benefactor to the university and continues to serve on the current campaign committee. He has helped make the University of Arkansas a premier institution of higher learning.”

“I’ve known and observed Coach Broyles since my time as an undergraduate at the university, said B. Allen Sugg, former UA System President. “He was one of the most impressive and capable people I’ve ever worked with. During his tenure as a coach, athletic director and fundraiser, Coach Broyles did more to help and support the University of Arkansas than anyone who has ever been associated with the institution. We will miss him.”

“While his main responsibility was the athletic program, Coach Broyles understood and cared deeply about the entire mission of the university,” said UA System President Donald R. Bobbitt. “When I was dean of Fulbright College, I greatly appreciated his understanding that the purpose of athletics was to showcase our students – not only the talents of the players, but also the cheerleaders, the marching band and others involved. He saw the big picture and because of that, he and the university had great success during his tenure as coach and athletic director. I’m saddened by his passing, but his legacy will live on for generations.”