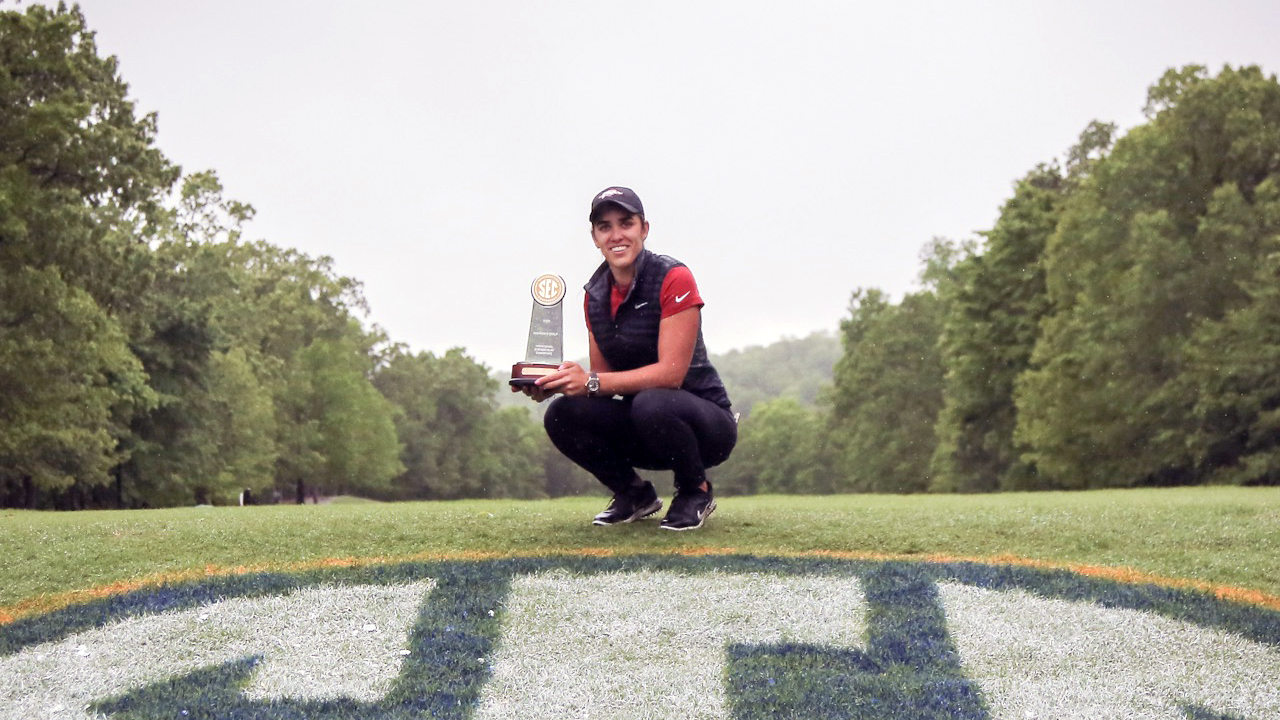 BIRMINGHAM, Ala. – University of Arkansas senior Maria Fassi posted a 1-under 71 winning her first Southeastern Conference individual title at the Legends Course at Greystone Country Club on Friday.

Fellow senior Kaylee Benton birdied two of her final three holes playing to a T2 with a 3-under 69 leading the No. 6 Razorbacks to a third-place finish. The Razorbacks move on to face Auburn in the first round of match play to determine the team title.

Fassi was tied for the lead late in the final round but birdied Nos. 9 and 11 and parred the last four holes for the four-shot win over three players, including Benton. Fassi’s outright win is the third in Razorback history. Stacy Lewis won the individual crown as a freshman in 2005 and again as a senior in 2008.

Fassi shot 71-68-71=210 tying the second-best Arkansas score at the SEC Tournament. It is one shot behind her 209 last season that put her in a tie for the lead forcing a playoff.

Benton was equally steady all week shooting 72-73-69=214. Her final round 69 ties her best round of the season and is her fourth round in the 60’s. It is Benton’s second top-10 finish at the SEC Championship after finishing T7 as a sophomore.

From SEC Champion Maria Fassi
It’s amazing to win the SEC Championship. We are one of the toughest conferences and being able to win and to do it in tough conditions like it was today is just amazing. I enjoy playing in the rain. It kinda brings out the best in me. It keeps me focused on things I need to focus on. I don’t worry as much about if I made a putt or missed a putt. I have to think about keeping my hands dry, keeping my clubs dry – things like that. It is so many things to think about that it makes me stay in the present. I worked hard to hit good shots today and hoped that would be enough at the end of the day. I knew where I was (on the leaderboard) and I just had to stay with my plan.

From SEC Runner-Up Kaylee Benton
I knew coming down the stretch I had to finish good for the team. At 16 I had a good look at a birdie and made it. I made a good par on 17 and hit my putt on 18 – it felt really good. The 18th hole has so many good memories for me. It was the final hole to win the SEC Championship (last year). Coming in today I had a nice wedge look at it and a pretty simple up-and-down and I pulled it off.

SEC Championship Notes
•Arkansas won the program’s first SEC title and it was the first title under the format that features match play.
•Maria Fassi tied for the individual title but lost the playoff. Fassi finished T5 as a freshman (2016), T63 as sophomore (2017) and as runner-up as a junior (2018).
•Arkansas finished third in stroke play last year and won the match play portion for the SEC title.
•The Razorbacks have 12 top-5 SEC finishes in program history.

NCAA Championships
The University of Arkansas and Blessings Golf Club are the proud hosts of the 2019 NCAA Women’s and Men’s National Championships. The women’s event begins May 17 and is immediately followed by the men’s championship beginning May 24. For more information or to volunteer for the event, log on to www.NCAAGolf19.com.