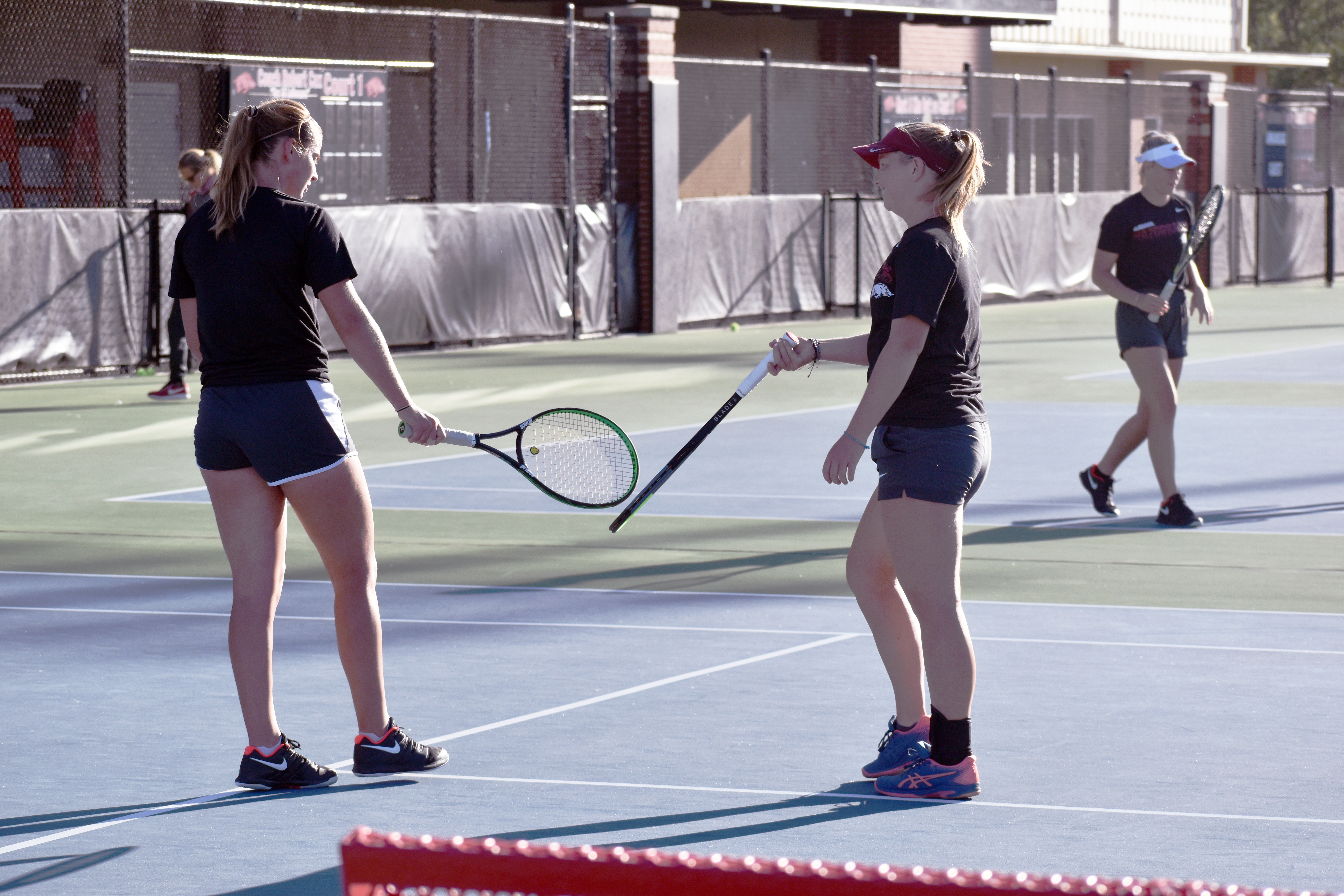 FAYETTEVILLE – It was a successful weekend in Fort Worth, Texas for the University of Arkansas Women’s Tennis team. Freshman Indianna Spink swept her competition on the weekend, taking home three doubles wins with teammate Morgan Cross and three singles wins as well.

Facing duos from all three schools, Arkansas saw wins in doubles play from Spink and Cross as well as Kelly Keller and her partner, Jackie Carr. Spink and Cross defeated Baylor’s Hannah Pinto and Caroline Kotarski (6-1) while Keller and Carr took down Matilde Magrini Lucie Devier of North Texas (6-4).

Arkansas continued to pull in the victories on day one as they took five of the six single match ups. Spink shined again with an impressive win over OU’s Carmen Corley in 6-3, 6-2 fashion. Keller also picked up a win over another Sooner, taking down Kianah Motosono (6-1, 7-5).

Senior Lauren Alter secured her first win of the weekend with a 6-4, 6-3 win over North Texas’ Matilde Magrini as freshman teammate Cross defeated Saki Oyama of the Mean Green by a score of 6-3, 6-3. Wrapping up the first day of competition for the Hogs, graduate Jackie Carr locked in a win over Hannah Pinto from Baylor (6-1, 6-1).

The Razorbacks picked up right where the left off on day two, coming out on top in three of their four doubles matches against their counterparts from Baylor. Cross and Spink battled it out in a tiebreaker to defeat Mel Krywoj and Alicia Herrero Linana, 7-6 (3). Alter and senior Tatum Rice swept through Jessica Hinojosa and Anastasia Kharitonova (6-1) and Keller and Carr represented the Hogs well in a 6-4 victory over Angelina Shakhraichuk and Audrey Boch-Collins.

The Razorbacks were challenge by the Bears in singles play, but Spink and Keller took home convincing wins against Hinojosa (6-4, 6-1) and Livia Kraus (6-0, 6-4) respectively.

Success in doubles competition continued on day three for Arkansas, as the Razorbacks defeated two pairs of Longhorns to start the day. Cross and Spink fought hard against Texas’ Malaika Rapolu and Fernanda Labraña and came out on top, 7-6 (7) while Keller and Carr defeated Marta Perez Mur and Gabby Cusano, 6-4.

All three freshmen showed out against their competition in singles play, including wins by Cross and Presley Southerland over their Longhorn competitors, Gabby Cusano (6-3, 3-6, 1-0 (4)) and Simran Kortikere (6-2, 7-6) respectively.

The biggest win of the day went to Spink, who claimed a huge victory over Peyton Stearns of Texas. When she was signed by the Longhorns in February of 2020, Stearns had a UTR (Universal Tennis Rating) rating of 11.79, which ranks No. 453 in the world and second nationally among players in the class of 2020.

Spink took down Stearns by a score of 6-3, 6-3, closing out her first weekend in the cardinal and white, undefeated.

The Razorbacks continue fall play next weekend, when they travel to Norman, Okla. to face opponents from Oklahoma, Oklahoma State, Texas Tech and North Texas, starting on Oct. 10.