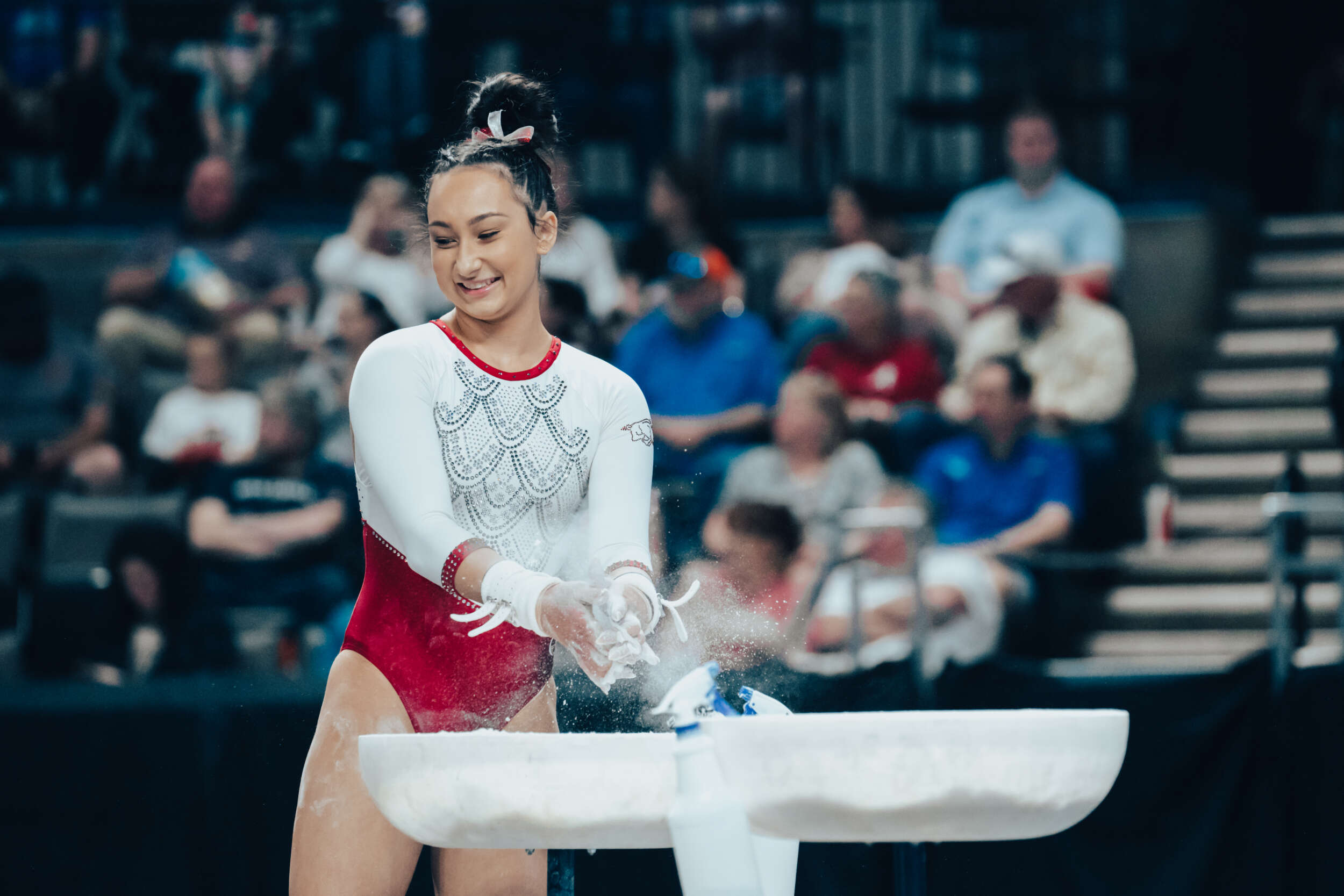 Arkansas Closes Regular Season with Quad Meet in the Rockies

The No. 18 Gymbacks head west for their 10th and final regular season meet this year, a quad competition with No. 14 Denver, No. 38 Nebraska and No. 12 Oregon State on Sunday at 3 p.m. in Denver.

It’s the second consecutive quad meet for Arkansas, who last competed at Elevate the Stage on March 6, in which the Razorbacks placed third among conference foes Alabama, Auburn and Georgia with a score of 196.800.

This week’s opponents are less familiar for Arkansas, and it’s been over 10 years since the team has competed in Denver. Combined, the Hogs have a 10-17 record over Denver, Nebraska and Oregon State and their only advantage in any of the series is a 5-4 all-time edge over the Beavers. The Gymbacks haven’t seen the Pioneers since 2020, the Huskers since 2016 and the Beavers since 2013.

Denver is coming off a victory against Penn State, Southern Utah and Cornell with a score of 197.075 in the quad meet. The Pioneers’ high score this season came on Jan. 21 with a 197.600 against West Virginia.

Nebraska most recently hosted the Masters Classic on March 4 and split the day with a win over Lindenwood and a loss against George Washington with a score of 194.925. Nebraska’s highest mark of the season was at Elevate the Stage Toledo on Feb. 19, in which the Huskers came in second place and scored 196.750.

Oregon State posted a victory over Arizona on the road last weekend with a score of 196.675. The Beavers have earned a share of the Pac-12 regular season title for the first time in program history along with ASU, Cal and Utah. Tokyo 2020 floor gold medalist and vault and all-around finalist Jade Carey is having a standout freshman year for the Beavers and is currently ranked No. 1 on bars and all-around, No. 2 on floor, No. 5 on vault and No. 16 on beam.

The Gymbacks entered back into the rankings after last week’s two away meets to become eligible for an NQS and are No. 18 overall, No. 11 on beam and tied for 19th on vault. Seniors Amanda Elswick and Kennedy Hambrick fall within the top 30 on beam at 13th and 26th, respectively, and freshman Leah Smith is ranked No. 43 all-around.

Sunday’s meet is set for 3 p.m. CT and will be available to stream via Pioneers All-Access, which requires a paid subscription. Live stats will also be provided by Denver.

Last Time Out
Arkansas had two meets in Alabama last weekend, the first a dual against then-No. 7 Alabama in Tuscaloosa on Friday and Elevate the Stage in Huntsville on Sunday. Elswick claimed her second beam title in as many weeks on Friday, but the Hogs ultimately fell 196.000-198.075 to Alabama. The team bounced back from the loss against the Crimson Tide on Friday with a solid outing in their second meet. Arkansas posted its second-highest vault (49.225) and bars (49.500) scores of the season en route to its final mark of 196.800, and the bars score is also the third highest in program history. Graduate student Sarah Shaffer led the way on bars with a career high 9.950 to tie for second, and the Hogs also added another top three finish with matching 9.900 scores from senior Kennedy Hambrick and freshman Makie Sedlacek to tie for third on vault.

Up Next
The Gymbacks begin postseason with the SEC Championship on Friday, March 19 in Birmingham, Ala. Teams will be split into two sessions according to seeds, to be announced. Tickets are currently on sale via Ticketmaster.