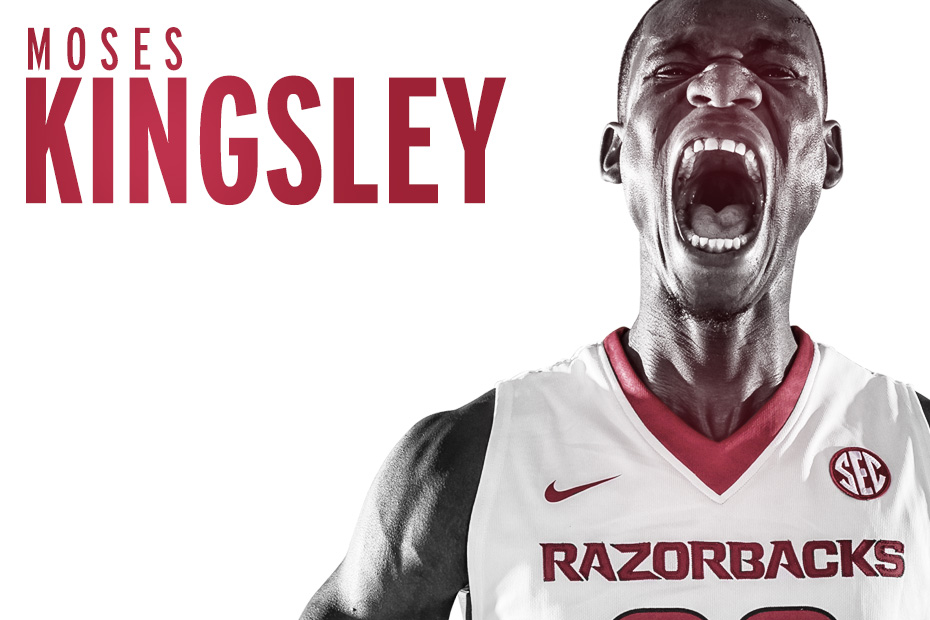 BIRMINGHAM, Ala. – Arkansas junior Moses Kingsley picked up a pair of SEC postseason awards from the league head coaches on Tuesday, earning second team All-SEC honors and landing on the SEC All-Defensive team.

The Abuja, Nigeria native is second only to LSU’s Ben Simmons in the SEC with 15 double-doubles and is the league’s only finalist for the Kareem Abdul-Jabbar Award as the nation’s top center. Kingsley was named the SEC Player of the Week on Feb. 1 after averaging 17.5 points and 11 rebounds per game with a pair of double-doubles in victories over No. 5 Texas A&M and Texas Tech.

He is the only player in the league with multiple games of 20 points, 10 rebounds and five blocks, and his 3.2 offensive rebounds per game lead the SEC. Kingsley is the lone player in the conference to rank in the top five in rebounds, field goal percentage and blocked shots.

On the defensive end, Kingsley has become the premier shot blocker in the league, swatting 75 shots to rank second in the SEC. He has recorded a block in 30 of 31 games this season, including four-plus blocks in seven contests. His 75 blocks are the ninth-most in a single season in Razorbacks history, while the 162 blocks in his career rank sixth in program history.

As the No. 9 seed in this week’s SEC Tournament, Arkansas (16-15, 9-9) will face No. 8 seed Florida in the second round on Thursday at Bridgestone Arena in Nashville, Tennessee. Tip-off is set for noon CT on SEC Network.