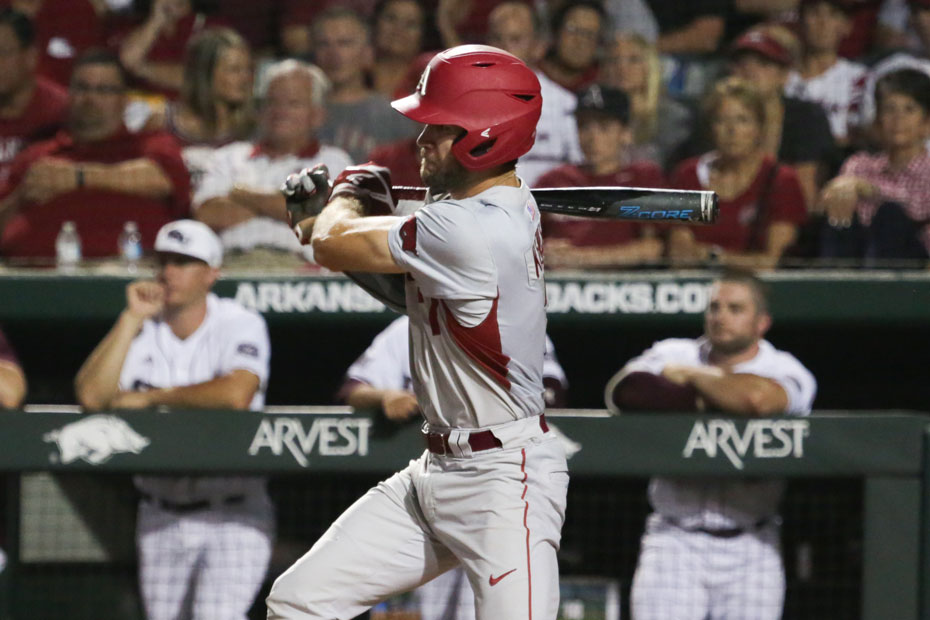 FAYETTEVILLE, Ark. — Arkansas came back from two deficits Saturday night against Missouri State in the NCAA Fayetteville Regional, but couldn’t come back a third time. The Bears took advantage of some pitching miscues in the sixth inning to score two go-ahead runs and defeat the Razorbacks, 5-4, at Baum Stadium.

Missouri State advances to the regional final and will face the winner of Arkansas and Oral Roberts at 8 p.m. on Sunday. The Hogs and Golden Eagles will play for the second time this weekend in an elimination game earlier in the day at 3 p.m.

The Razorbacks outhit the Bears, 7-5, but left nine men on base as multiple scoring opportunities were left on the basepaths in the fifth and seventh innings.

Junior Luke Bonfield led all hitters in the game, going 3-for-5 with a run scored, his 23rd multi-hit game of the year and sixth three-hit game. His single in the fifth was part of a three-hit string that eventually led to Arkansas tying the game at 3-3 and forcing Missouri State starting pitcher Dylan Coleman out of the game.

Chad Spanberger, Dominic Fletcher, Jax Biggers, and Jack Kenley also recorded hits in the game. Fletcher’s one-out RBI double in the fifth got the rally going to tie the game for the second time. It was Fletcher’s sixth double of the year and third in his last six games.

Kenley also continued his hot bat as he added his second RBI of the year and now has three hits in the regional, the second-highest total among all Razorback hitters.

Missouri State had taken the early 1-0 lead in the first on a lead-off home run by Hunter Steinmetz, but sophomore pitcher Blaine Knight settled in nicely to put together a strong outing.

Knight finished with 5.1 innings of work, but of the six baserunners he allowed, four of them scored, and three came off the home run. Knight still was able to strike out eight Missouri State batters, his second-straight outing of eight or more strikeouts.

After Knight was taken out of the game in the middle of the sixth, freshman Matt Cronin was tasked with trying to get out of the inning with the middle of the Bears’ lineup due up with one out and a man on. Cronin struggled with control as he hit Blake Graham and then walked Alex Jefferson to load the bases.

Head coach Dave Van Horn decided to go to senior Dominic Taccolini, but a passed ball followed by an RBI groundout led to two more Bear runs to make it 5-3. Arkansas did get within a run in the seventh when Carson Shaddy made it around the bases on three wild pitches before scoring, but the Razorbacks only managed one baserunner over the final two innings.

Razorback Quotables
“We had runners all over the bases and we couldn’t quite get that big hit. We walked more than we normally do and hit a guy or two. We wild pitched in a run, which is disappointing. Again, we had our shot. – Head coach Dave Van Horn on not being able to capitalize on scoring opportunities

“The pitching was good but like Coach (Van Horn) said, we had opportunities to hit the ball and get runners in but it didn’t happen today. We left too many guys in scoring position I think. We’ll bounce back tomorrow.” – Jake Arledge on the offense slowing since the SEC Tournament

“Baseball’s a game of ups and downs and I think you’re going to see a game of really determined offense tomorrow and obviously you can’t predict how things are going to go but we’re going to come out with the mentality to rip your head off tomorrow.” –Luke Bonfield on the difference in the offense since the SEC Tournament

Up Next
Arkansas will face four-seed Oral Roberts in an elimination game Sunday at 3 p.m. at Baum Stadium. The winner will move on to face two-seed Missouri State at 8 p.m. later in the day. All games will be televised on ESPN3.