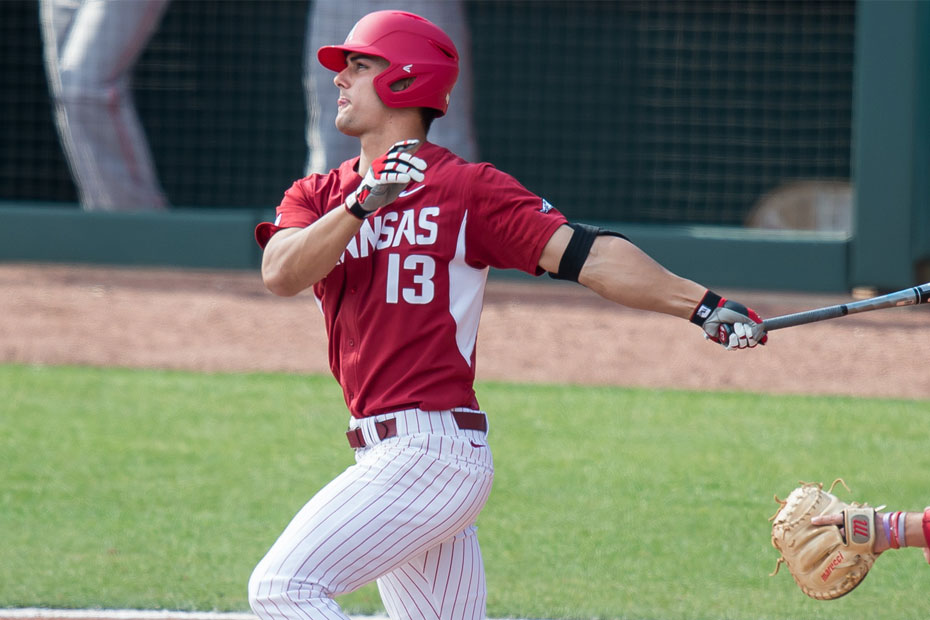 With the Bulldogs (8-1) jumping out to a 10-1 lead through two innings, Arkansas (7-1) was in desperate need of some scoreless innings by the pitching staff. The combination of Cody Scroggins and Jake Reindl came through with 3.1 innings of scoreless baseball, giving way to sophomore Barrett Loseke. The Tulsa, Oklahoma native finished the game with 4.0 near perfect innings, giving up no runs, one hit, and totaling a career-high seven strikeouts to garner the victory.

With the pitching staff holding the La. Tech bats at bay, the Arkansas offense went to work scoring two runs in the fourth inning and five in the fifth inning. Grant Koch and Jax Biggers each hit home runs in the five-run fifth, followed by a solo shot by Luke Bonfield in the seventh.

Koch and Biggers both finished the game with three and four hits, respectively. Biggers was a perfect 4-for-4 at the plate with two RBIs, marking the second four-hit game by a Razorback this year.

Arkansas had already tied the game at 10 in the seventh inning before McFarland hit his home run, but it turned out to be the biggest hit of the night as it pushed the Hogs ahead 12-10, and secured the win. McFarland finished the game 2-for-5 with three RBIs and one run scored.

Moments That Mattered
Arkansas struggled offensively early in the game, getting only one run in the second inning on a failed pickoff attempt at first base. Carson Shaddy, who reached on an error earlier in the inning, was able to score easily.

Unfortunately, Louisiana Tech, which scored three runs in the first on two home runs, chased starting pitcher Evan Lee after just one inning and got to the bullpen in the second with seven more runs to take a 10-1 lead.

The Hogs started to chip away in the fourth inning with two runs off RBI singles by Biggers and McFarland to make it 10-3. The offense exploded in the fifth with five runs to make it 10-8, four coming from home runs by Koch and Biggers.

Koch’s homer was his team-leading third home run of the year, part of a 3-for-5 day at the plate. It was the fourth multi-hit game of the season for the catcher and his second three-hit game, matching his total from last year. As for Biggers, the shortstop came into the game batting just .182, but promptly followed Koch’s big fly with a solo bomb of his own over the right field fence. Biggers is the seventh different Razorback to hit a home run this year.

The home runs kept coming in the late innings for the Razorbacks. After a scoreless sixth, Bonfield kicked off the seventh with his first home run of the year to make it 10-9. Two batters later, Shaddy singled home Koch to tie the game at 10-10.

With the nine-run comeback complete, Arkansas had all the momentum on its side with still two innings left to play. That’s when McFarland came through with the big swing with two outs in the seventh, launching a two-run home run to left-centerfield giving the Hogs the lead for good.

Arkansas added one more run in the ninth inning courtesy of another home run, the team’s fifth of the game. Dominic Fletcher was the latest with the big stick as it was his second home run of the year, adding an insurance run for the Razorbacks.

The five home runs in the game was the most since 2010, when the Hogs launched nine long balls against Grambling State in the NCAA Fayetteville Regional.

Up Next
Arkansas heads to Frisco, Texas to take part in the inaugural Frisco College Classic at Dr. Pepper Ballpark this weekend. Arkansas, Arizona, Oklahoma State, and Nebraska will make up the four-team field. Both Arizona and Oklahoma State are College World Series participants from a year ago.

The Hogs will face No. 9 Arizona on Friday at 4 p.m., and then Nebraska on Saturday at 7:30 p.m. The Razorbacks will finish the weekend against No. 24 Oklahoma State on Sunday at 3:30 p.m. All three games will be televised on Cox Sports Television.