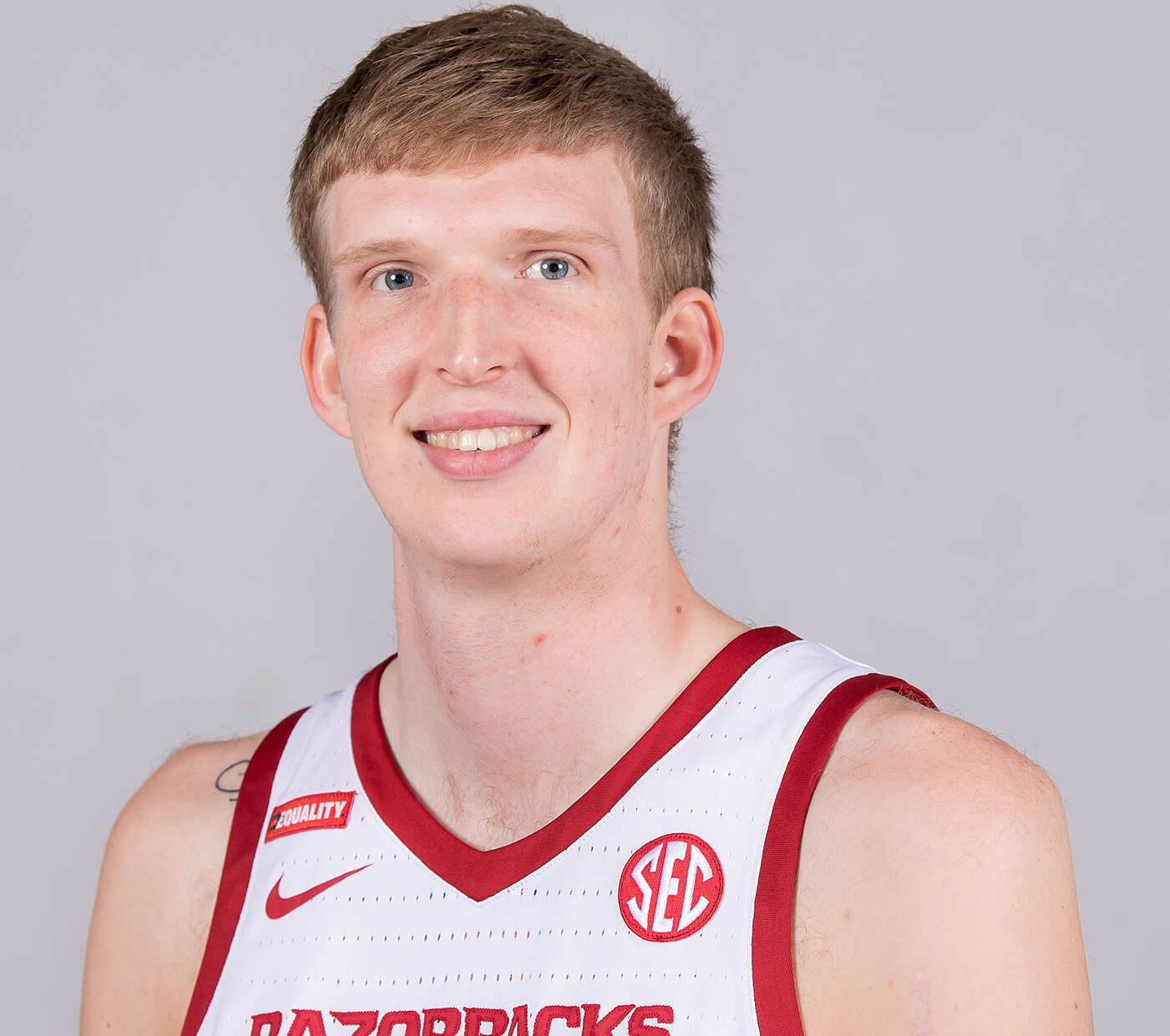 2019-20 (So. at Arkansas):
^ Was rated the 44th-best “Sit-Out” Transfer in the Nation by ESPN.com for the 2020-21 season.
Named to the 2021 SEC Winter Honor Roll … Played in 29 games with 27 starts … Ranked 5th SEC / 35th NCAA in blocked shots (1.82) and was 26th in NCAA / 3rd SEC in total blocked shots (51) … 1 of 3 players in the NCAA to have at least 50 blocked shots and 20 3-pointers made … In fact, Vanover the first Arkansas player with 50+ blocks and 20+ 3’s made in a season and only nine other Hogs have reached those levels in an entire career (HogStats.com) … Only missed one free throw for the season (his 20th attempt) and was 20-of-21 for the season … Over the last 10 regular-season games, had 25 blocked shots (2.5 avg.) and he shot 36% (9–of-25) from 3-point range over the final 11 regular-season games … In his Razorback debut versus Mississippi Valley State, had a game-high 23 points — one shy of his career high — and tied a then career-high with eight rebounds … Drained 4-of-5 from 3-point range and added three blocked shots … 23 points ties for third-best production by a Razorback in his debut since 1980 … Only scored six points versus North Texas, but had a career-high 16 rebounds and tied his career-high with six blocked shots … Only Razorback on record to have as many as 16 rebounds and six blocked shots in a game … Only SEC player to have 16 and 6 since in a game since Kentucky’s Anthony Davis had 16 and 6 (ironically with just six points too) in the 2012 national championship game … Scored 12 points in just 12 minutes versus UT Arlington, making 5-of-6 shots, including 2-of-3 from 3-point range … Was just 2-of-8 from the field (all 3-pointers) versus Lipscomb but had a game-high nine rebounds with four blocked shots in just 15 minutes played … Only scored three points vs Southern (a 3-pointer) but had nine rebounds (all defensive) with three blocked shots and a career-high three steals … Had his second carer double-digit rebound game with 10 versus Central Arkansas (nine defensive) … Added nine points and two blocked shots … Pumped in 17 points, making 6-of-6 from the free throw line, at Auburn with five rebounds … Contributed 12 points and seven rebounds at Tennessee, making 5-of-9 FG and 1-of-3 3PT … In the win vs Ole Miss, only scored eight points, but effected the game in may ways … Had a team-best seven rebounds (only had 10 in previous five games) and blocked five shots (only had five in his previous 10 games) … Played all 20 minutes of the second half and 28:45 for the game (only played 40 total minutes his previous five games including 18 at Vandy) … For the second straight game, had five blocked shots (all in the second half) at Oklahoma State … Led Arkansas with 13 points versus Mississippi State, adding eight rebounds, three blocked shots and two steals … Played all 20 minutes of the second half versus the Bulldogs with 11 points, six boards, both steals and all three blocked shots … Made four field goals and scored 12 points at Kentucky … Sank 2-of-4 3-pointers and had two dunks … Snapped an eight-game streak with no free throws by going 2-of-2 … Recorded two blocked shots … Had 12 points and two blocked shots at Missouri … Struggled early (zero stats in 4:07 playing time in the first half) … Played 18:26 of the second half and scored all 12 of his points (5-of-6 shooting overall and 2-of-3 from 3-point range) with two assists … Served as a strong presence in the middle at South Carolina with six rebounds and four blocked shots.

High School/Prep:
Began his high school career at Arkansas Baptist Prep before transferring to Findley (Nev.) Prep for his senior season … At Findley, he was a teammate of current Razorback Reggie Chaney and averaged 8.3 points, 7.3 rebounds, 2.5 assists in 1.3 steals. He helped the Pilots to a 32-5 record and a No. 26 national ranking … At Arkansas Baptist Prep, Vanover led the Eagles to a three-year record of 82-21 with three league crowns and back-to-back Arkansas Activities Association (AAA) Class 4A state titles (2016 and 2017) … Tallied more than 1,000 points, 700 rebounds and 300 blocks while being a two-time USA Today All-Arkansas selection (2016 and 2017), the 2016 Arkansas Class 4A State Tournament MVP and a three-time Arkansas 4A All-State pick (2015, 2016 and 2017) … Vanover was a member of Team USA’s U16 and U17 squads and captured a gold medal at the 2015 FIBA Americas U16 Championship in Argentina after averaging 3.8 points, 3.8 rebounds and 1.2 blocks in four games.

PERSONAL:
Born June 23, 1999, in Little Rock … Son of Chris and Robyn Vanover … His mother, the former Robyn Irwin, was a member of the University of Arkansas women’s basketball squad from 1986-89 and led the Razorbacks in blocked shots three times … Has two older brothers, twins Brandon and Justin. Brandon (7-0) played basketball at Central Arkansas and Justin (7-1) played saxophone with the Alabama Crimson Tide marching band … Majoring in communications.