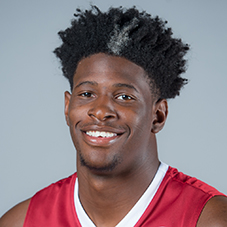 As a Junior (2016-17)
Started 30 of 36 games, including the final 21 … finished third on the team in scoring, averaging 12.8 points per game … tallied five 20-point games, all coming away from Bud Walton Arena … shot 90.0 percent (18-20) from the free throw line over the last seven games of the season … pulled down multiple rebounds in each of the final 28 games of the season, including a career-high seven boards in the first round of the NCAA Tournament against Seton Hall (March 17) where he also scored 20 points … tied for third on the team in rebounding at 3.8 per game … finished second on the team with 72 assists and had 21 games with multiple dimes … averaged 16.4 points per game over the final 11 contests … scored 10-plus points in the first half in seven of the 12 road/neutral site games against an SEC opponent, including the semifinals of the SEC Tournament against Vanderbilt (March 11).

Played and started all 32 games … ranked as the No. 1 junior college transfer in the 2016 class with a 94 percent composite rating by 247Sports … led the nation in scoring at 26.2 points per game and paced the country in field goals made (310-527) and total points (837) … ranked ninth in the country with 88 steals … led Motlow to a 25-7 record during his sophomore season and an overall record of 48-13 during his two years … helped the Bucs advance to the conference tournament championship game as a sophomore … was second in school history with 1,393 career points … scored in double figures in 31 of 32 games and reached the 20-point mark 26 times … scored 30-plus points in 13 different games and had a stretch of seven straight games scoring at least 30 points … recorded a career-high 45 points in the semifinal round of the conference tournament … was the second player in school history to earn back-to-back All-America honors.

High School
Attended South Side High School in Jackson, Tennessee … named the West Tennessee Player of the Year during his senior season … led his team to the Class AA State Championship as a senior, averaging 22.5 points, three assists and three steals per game … earned District 14-AA Player of the Year honors and named to multiple all-district and all-region teams.