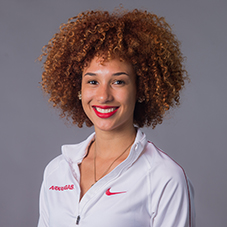 Senior (2018)
NCAA indoor champion (pentathlon). SEC champion (pentathlon)… Competed in seven meets during the indoor season… Set a personal-best in the 60-meters at the Tyson Invitational (7.41)… Earned First-Team All-American honors at the NCAA Indoor Championships where Brooks captured the NCAA title in the pentathlon… Competed in eight meets during the outdoor season… Set personal-best in the 200-meters (23.84) and set the school record in the long jump (6.78m/22′-3″) at the Arkansas Spring Invitational (Mar 23)… Gold medalist in the pentathlon at the 91st Texas Relays (Mar. 28)… Ran the No. 9 time in program history at the LSU Alumni Gold meet crossing the line in 11.52 seconds… Recorded the No. 3 time in program history in the 100-meter hurdles at the SEC Outdoor Championships with her time of 12.94… Ran the anchor leg of the school record 4-x-100-meter relay that finished third in 43.26… Qualified for the NCAA Championships in the 4-x-100-meter relay that earned Second-Team All-American honors finishing 10th… Competed in the 100-meter hurdles at the USATF Outdoor Championships advancing to the semifinals…

Junior (2017)
NCAA indoor runner-up (pentathlon), NCAA Outdoor bronze medalist (heptathlon), Three-time All-American, SEC outdoor champion … Opened her junior season with a long jump win at the Arkansas Invitational … Picked up two more event titles in the long jump and 60-meter hurdles to cap the the regular season at the Arkansas Qualifier … Helped the Razorbacks capture another conference title as the SEC runner-up in the pentathlon with a score of 4,450 points, while also scoring in the long jump … Qualified for the NCAA Indoor Championships in the pentathlon and the long jump … Set a program records in the pentathlon (4,580 points) and the long jump (21-3.50), placing her second and ninth, respectively, in those two events at the national meet … Kicked off her combined events outdoor debut at the Texas Relays, finishing second with a PR of 6,075 points to take the NCAA lead … Lead leg for the 4-x-100-meter relay team that set a program record of 43.57 at the SEC Relays … Captured the SEC title in the heptathlon with a program record score of 6,099 points … Qualified for the NCAA Outdoor Championships in the heptathlon … Closed out her year winning a bronze medal in the heptathlon, assisted by a program-record performance of 21-4 in the long jump.

Sophomore (2016)
NCAA indoor runner-up (pentathlon), NCAA Outdoor bronze medalist (long jump),  Three-time All-American … Collected several personal best marks at the Razorback Invitational in 800m (2:19.06), 60mH (8.18) and the long jump (6.35m/20-10) to pace her to a pentathlon PR of 4,457 — second best performance in program history … Captured second-team All-SEC honors with a runner-up finish in the pentathlon … Qualified for NCAA Indoor Championships in three events (60mH, long jump, pentathlon) … Scored eight points towards the Razorbacks’ national runner-up finish placing second in the pentathlon with a score of 4,432 points … Capped her second indoor season with three All-America honors … Kicked off the outdoor season as the 2016 Clyde Littlefield Texas Relays champion with a score and personal best of 5,991 points … Set a new school record in the long jump at the Arkansas Twilight (5/6) of 6.39m/20-11.75 … Scored five points at SEC Championship with a fourth-place finish in the heptathlon to help Arkansas to another Triple Crown … Qualified for the NCAA Championship as one of the top-three best long jumpers out of the NCAA West Preliminary round as one of the top-five best heptathletes in the nation … Picked up six points for the Razorbacks with a solid effort in the long jump at the national meet to help clinch Arkansas’ first NCAA Outdoor title … She closed her season as the 2016 NACAC heptathlon champion for team USA.

Personal
Born Feb. 8, 1995 … Daughter of Robert Brooks and Diann Clark … Has three sisters and one brother … Majoring in communications with a minor in legal studies.