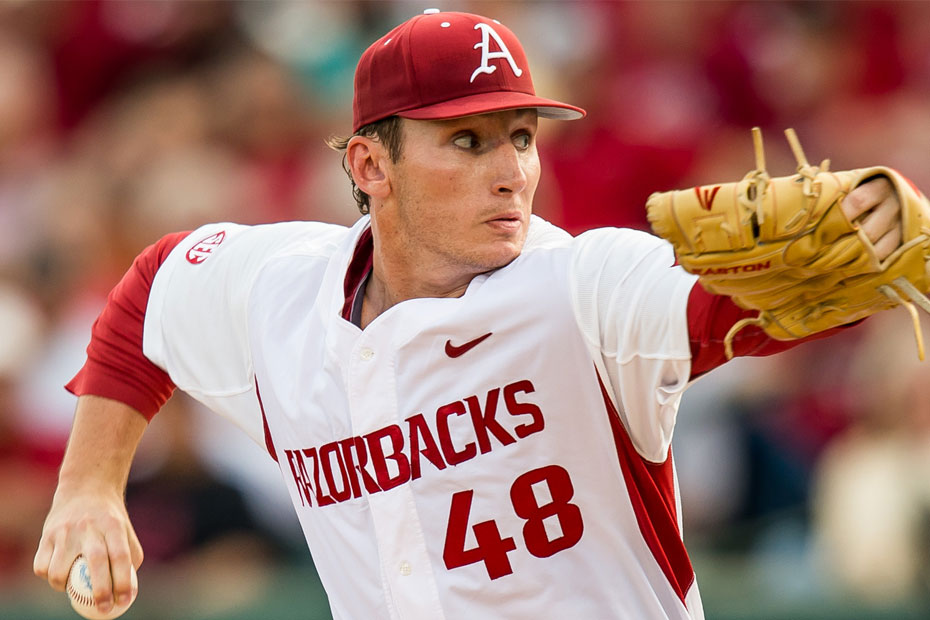 With the win, the top-seeded Razorbacks (43-17) advance to play two-seed Missouri State in the winners’ bracket of the Fayetteville Regional on Saturday with first pitch set for 7 p.m. Oral Roberts (42-15) will face three-seed Oklahoma State earlier in the day in an elimination game at 2 p.m.

Its Arkansas’ third-straight regional opening victory and first shutout in a regional since blanking Bucknell, 10-0, in the 2014 Charlottesville Regional.

For the sixth time this season, Stephan set down 10 or more opposing batters on strikes. His 12 strikeouts Friday night was his second-most this season, one less than his career-high of 13 that he set against Rhode Island on March 10.

At the plate, Jack Kenley, Chad Spanberger, and Jake Arledge all turned in two-hit games. Kenley, who was making just his fifth start of the year at third base, and only had one hit in 24 at-bats, came through with a lead-off single in the fifth that eventually led to the game’s first run.

Meanwhile, Spanberger turned in his 22nd multi-hit game after 2-for-3 with an RBI. His double in the fifth scored Kenley to put Arkansas ahead 1-0, giving him 65 RBIs on the season.

Arkansas finally broke through in the bottom of the fifth when Spanberger doubled home Kenley with a knock down the right field line, making it 1-0. The inning started when Kenley singled to lead off the frame, his second hit of the game, before moving to second on a groundout by Eric Cole.

Spanberger, who was coming off a monstrous SEC Tournament, hit his 13th double of the season to give the Hogs the lead and earn his 14th extra-base hit in his last 10 games.

Once Arkansas got the lead, Stephan had plenty of breathing room as he set down six-straight batters over the sixth and seventh innings and began the eighth inning. In the sixth, when Stephan struck out Brent Williams for his ninth strikeout of the game, it gave the Razorbacks 566 strikeouts as a pitching staff, the most by any Razorback pitching staff in a single-season. The bullpen struck out two more after Stephan was pulled, making it 14 Golden Eagle batters struck out in the game, which ups Arkansas’ total to 571 for the year.

The Hogs got their insurance runs in the seventh and eighth innings before the bullpen was able to shut the door in the ninth. An RBI single from Eric Cole in the seventh scored Arledge to make it a two-run game. Then, in the eighth, Arledge roped his second hit of the night to score Dominic Fletcher, making it 3-0.

Earlier in the seventh inning, Arledge looked to have been picked off at first base, but upon trying to move to second, Oral Roberts’ first baseman threw the ball away into the outfield, letting Arledge move to third, leading to Cole’s RBI.

Razorback Quotables
“Well first off, I just thought it was a very well‐pitched game by both teams. I thought (RHP) Trevor Stephan and (Oral Roberts LHP) Miguel Ausua went at it. It reminded me of a Friday night SEC game where maybe one big hit or mistake might be the difference. That second run … we were very fortunate on that with the throw that kind of went back into the runner. Then we just dropped one in there to get that second run. That third run was huge. The pitching was outstanding. Trevor gave us every opportunity to get the lead. With the feel of the game, you knew it was going to be tight. And we’re fortunate to get away with that win.” – Head coach Dave Van Horn on the win over Oral Roberts

“We feel good about our lineup having some depth. We feel like we can score every inning. We’ve talked about that a lot. It doesn’t have to be the top or the middle (of the lineup). We can get it done with the bottom as well. Some of the guys who hit at the bottom of the order hit at the top of the order earlier in the season. We’ve moved guys around and kind of mixed and matched. Tonight, it paid off.” – Head coach Dave Van Horn on the bottom of the lineup producing

“That was definitely a career high (pitches) for me. I think the most I threw before that was 105. So it wasn’t too much more. The night went pretty well there for the most part. I was kind of locked in early and then went through a little rough stretch there in the third and fourth. But then I found it again. So that was nice to find it again.” – Trevor Stephan on his pitching performance

“It meant a lot, just the fact that I was being put in those situations where I could get some playing time and get some experience. It let me know that they had confidence in me. It meant a lot for me going forth, and it helped me define my role. Something coach (assistant coach) Tony Vitello says is sometimes the biggest thing you’re competing against is just yourself … how you can be the best version of yourself that day is how you’ll succeed that day. The roles I was put in throughout the season helped me define that role as best I can for myself. I needed to try to raise my play just that much more. That’s helped a lot.” – Jack Kenley on earning playing time in recent weeks

Up Next
Arkansas will face off with two-seed Missouri State on Saturday for a spot in the regional final. First pitch is slated for 7 p.m. and will be broadcast on ESPN3.