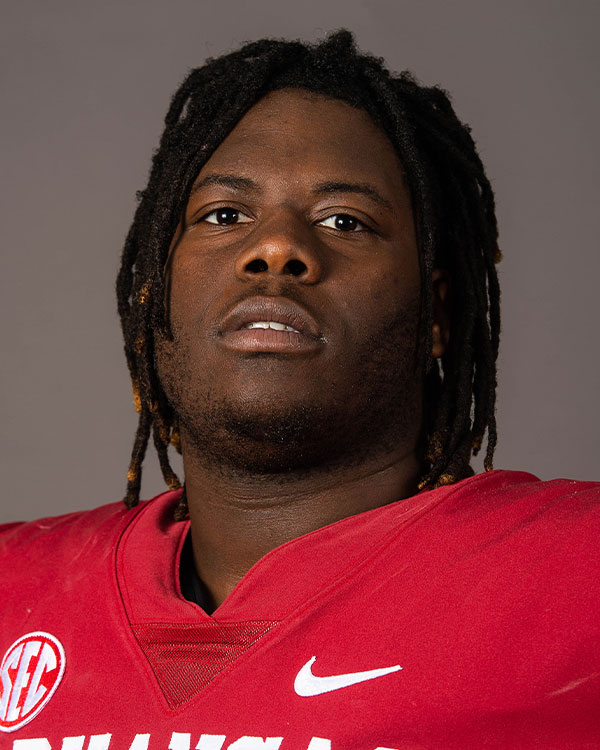 2020 (REDSHIRT FRESHMAN): Played in three games against Florida (Nov. 14), LSU (Nov. 21) and Alabama (Dec. 12), seeing action on the defensive line … Totaled seven tackles (three solo) … Made season debut at Florida and did not record any statistics … Logged a career-high six tackles and played a career-best 46 snaps against LSU … Registered one tackle in the season finale against Alabama … According to Pro Football Focus, saw action in 55 defensive and 8 special teams snaps … Posted a rush defensive grade of 69.4.

2019 (FRESHMAN): Played in two games during his freshman season at Arkansas, appearing in the season opener against Portland State (Aug. 30) and at Kentucky (Oct. 12) … Recorded one tackle, going for a one-yard loss against the Wildcats … Totaled four snaps in the contest in Lexington.

HIGH SCHOOL: Three-star prospect by Rivals and 247Sports … Rated as the No. 8 player in the state of Arkansas by Rivals … Four-year varsity letterwinner at Warren High School in Warren, Arkansas … Also lettered in basketball … Racked up 52 total tackles, seven for loss, including two sacks to go with four quarterback hurries and one recovered fumble as a senior … Helped the Lumberjacks to a 9-2 overall record and a berth in the second round of the Arkansas state 4A playoffs … Posted 78 tackles and eight sacks, as well as six PBUs as a junior in 2017, propelling Warren HS to 13-2 mark and a heart-breaking one point loss in the 2017 Centennial Bank Arkansas state 4A championship game … CHOSE ARKANSAS OVER: Missouri, Tennessee and others.