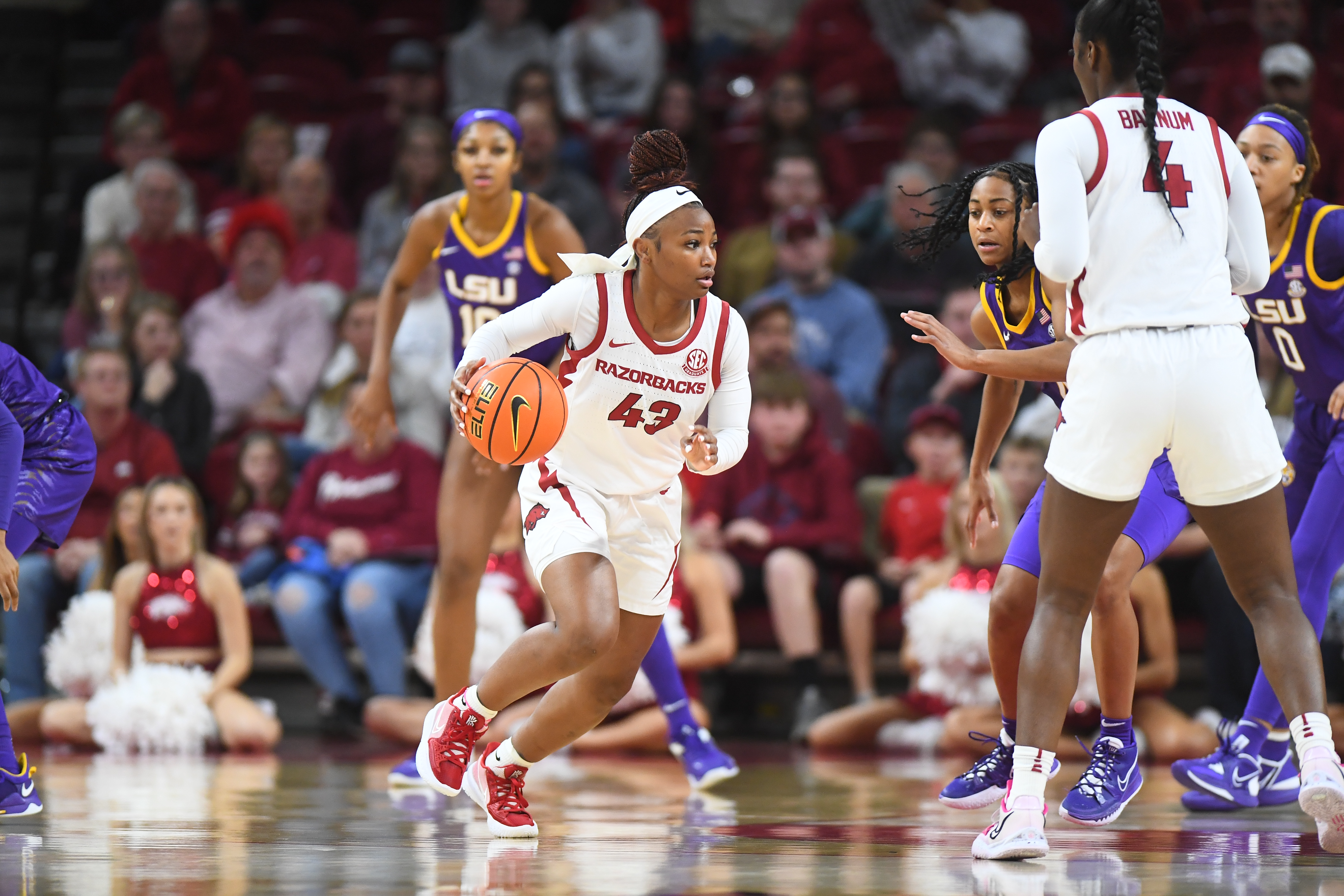 FAYETTEVILLE, Ark. – The No. 24/22 Arkansas women’s basketball team (13-3) was unable to overcome a tough shooting night, dropping to No. 9/9 LSU (13-0) in the SEC opener, 69-45. The Razorbacks shot 27.9 percent from the field, while holding LSU to 34 percent, but the difference in the game was the rebounding, as the Razorbacks were outrebounded, 62-30. Samara Spencer led the game with 17 points.

Arkansas took an early lead, 5-4, after a Makayla Daniels triple. The Razorbacks then hit only one of its next seven field goals, but kept LSU empty on the other end, as Arkansas led 7-6 at the media timeout. LSU retook the lead off a third-chance layup. As Arkansas hit a scoring drought for over five minutes, LSU scored eight unanswered points, but Daniels helped the Razorbacks get out of the long drought following a fastbreak layup off a steal. Arkansas came up with a stop on the other end, as LSU had the 14-9 advantage after one quarter.

LSU opened the second quarter with a 3-pointer, which sparked a 7-0 run, as the Tigers led 21-9 with 8:28 left in the second quarter. Erynn Barnum got the Razorbacks on the board two minutes into the quarter with a layup. After Arkansas’ first offensive rebound of the night, Spencer capitalized with a 3-pointer and followed with a layup to cut the Tigers’ lead to seven. After two LSU triples, the Tigers had the 14-point edge, 32-18, with less than three minutes left in the half. After a few free throws and a Maryam Dauda triple, Arkansas cut the lead under 10, 34-25, with under a minute to go in the half. LSU would make their next to baskets to take the 38-25 advantage into halftime.

Spencer opened the second half with two triples to cut the lead down to nine. LSU would keep going to work, extending their lead to 14 four minutes into the quarter, but a Daniels 3-pointer followed by a Barnum layup cut the deficit back to 10 with five minutes and some change to work with in the third quarter. Arkansas hit another drought, which allowed LSU to go on a 6-0 run with under three minutes to pay in the quarter. LSU closed out the quarter on a 5-2 run to take the 55-38 advantage going into the final 10 minutes of action.

LSU outscored Arkansas 14-7 in the fourth quarter, with Chrissy Carr tallying six of the Razorbacks’ seven in that quarter, all off layups. Arkansas went on to lose its third straight game, 69-45.

Arkansas will hit the road for their first SEC road contest, as well as first game of 2023 on Sunday, Jan. 1 against Kentucky. Tipoff is set for 1 p.m. Central Time with the game streamed on SEC Network+.