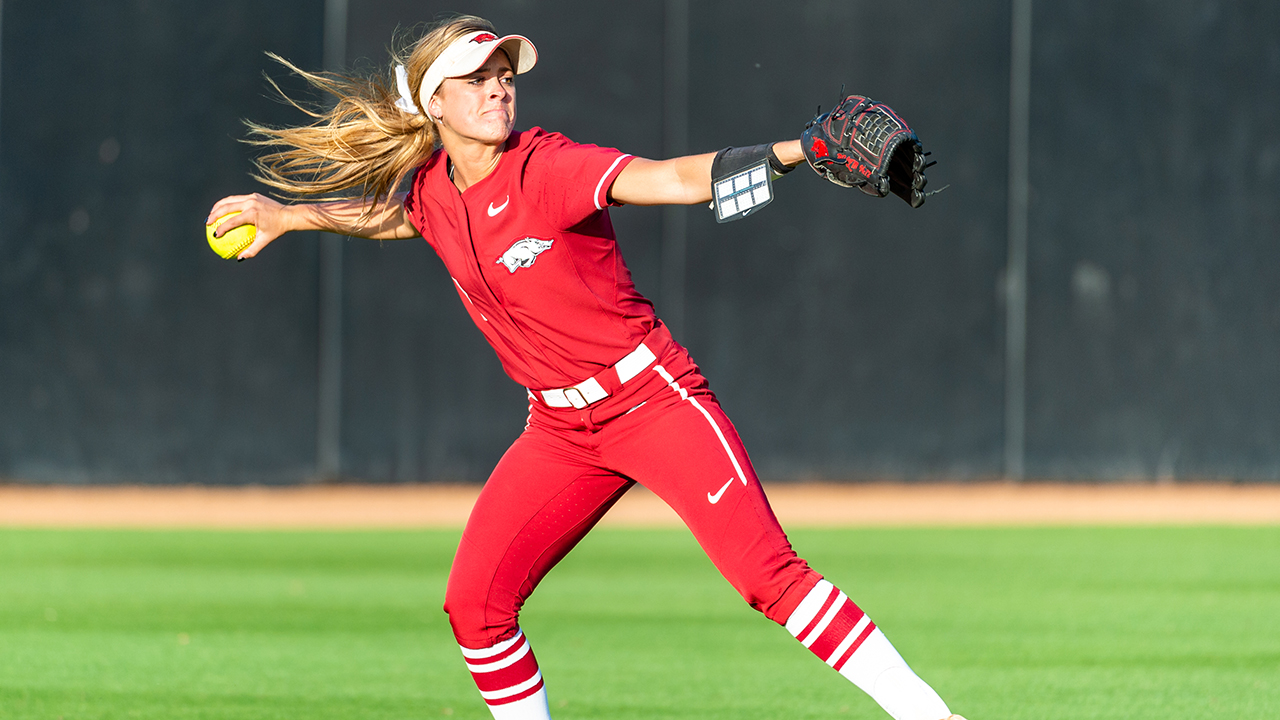 LAS CRUCES, N.M. – The No. 24 Arkansas Razorbacks (1-1) split a doubleheader at the Troy Cox Classic hosted by New Mexico State on Friday, Feb. 7. The Razorbacks opened their 24th season of softball by run-ruling UTEP (0-2), 10-0, in the morning contest. Despite outhitting the Braves, 5-4, Bradley (1-0) defeated the Razorbacks 3-2 in the nightcap.

The Razorbacks used a patient approach at the plate and coaxed 12 walks against UTEP pitching. The 12 free passes are tied for third-most in a game in program history and equaled the mark for the fourth time (MVSU 3/9/14, at FGCU 2/22/14, Florida 3/25/00). The Razorbacks scored in every inning and posted multi-run frames in the third, fourth and fifth. Arkansas plated a run in the first after it loaded the bases on two hit by pitches and a walk. Senior designated player Ryan Jackson worked a bases loaded RBI walk to plate junior outfielder Hannah McEwen. In the bottom of the second, McEwen lifted a base knock toward right to plate sophomore infielder Audrie LaValley.

Once again, the Hogs took advantage of UTEP miscues and scored three runs in the third without recording a hit. With Jackson standing on third and one out, the UTEP catcher fired a snap throw to third that was dropped by the third baseman which allowed a run to score. Junior infielder Braxton Burnside was plunked by a pitch with the bases loaded and a wild pitch allowed Parr to cross the plate. In total, Arkansas hitters walked five times in the stanza and took a 5-0 lead.

In the fourth, Parr doubled in a run and Burnside drew a bases loaded walk to extend the Arkansas lead, 7-0. Two reached in the bottom of the fifth and freshman Rylin Hedgecock was called to pinch hit. In her first collegiate plate appearance, Hedgecock launched a towering three-run blast over the centerfield fence to earn the 10-0 walk-off run-rule victory.

Razorback pitching breezed through the UTEP lineup and only tossed 72 pitches. Senior Autumn Storms (1-0) earned the win and coasted through four innings. She allowed just three hits and struck out two. Freshman Jenna Bloom made her collegiate debut and recorded a strikeout in a scoreless fifth inning. Allie Johnson (0-1) worked 4.1 frames for the Miners and allowed seven hits, 10 earned runs, 12 walks and struck out three. Arkansas totaled 16 free bases on 12 base on balls and four hit by pitches.

The Hogs improved to 4-1 in season openers during head coach Courtney Deifel’s tenure.

Arkansas was first on the scoreboard for the second straight game and plated a solo tally in the first inning. In the first plate appearance of the game, Parr placed a bunt hit down the third base line to reach and then swiped second base. McEwen deposited her first double of the campaign to center to give the Hogs an early 1-0 edge. Both pitchers found their grove until the bottom of the fourth inning when Bradley scored two runs. A two-out Razorback error proved costly as the next batter hit a two-run homer to left to give the Braves the lead, 2-1.

Bradley added another run in the bottom of the fifth inning on a wild pitch that allowed a run to score from second.

The Razorbacks mounted a comeback attempt in the seventh inning as Kayla Green and Hedgecock both pinch hit and reached base on a walk and hit by pitch to leadoff the frame. Parr laid down another bunt single to load the bases with nobody out. McEwen then hit a flyout to right and the runner from third tagged and attempted to score but was cut down on a perfect throw from Bradley rightfielder Jillian Navarro. With two outs Burnside reached on an error, which allowed a run to score and bring the Razorbacks within one, 3-2.

Junior Mary Haff (0-1) threw all six innings for the Razorbacks and allowed just one earned run. The righthander allowed four hits, did not walk a batter and struck out three. Emma Jackson (1-0) went the distance for the Braves and gave up five hits, two earned runs, and three walks while striking out six.

Up Next
Arkansas is back in action tomorrow, Feb. 8 for another doubleheader day at the Troy Cox Classic. A rematch against Braves begins the twinbill at 12:30 p.m. will conclude against host New Mexico State at 5:30 p.m.