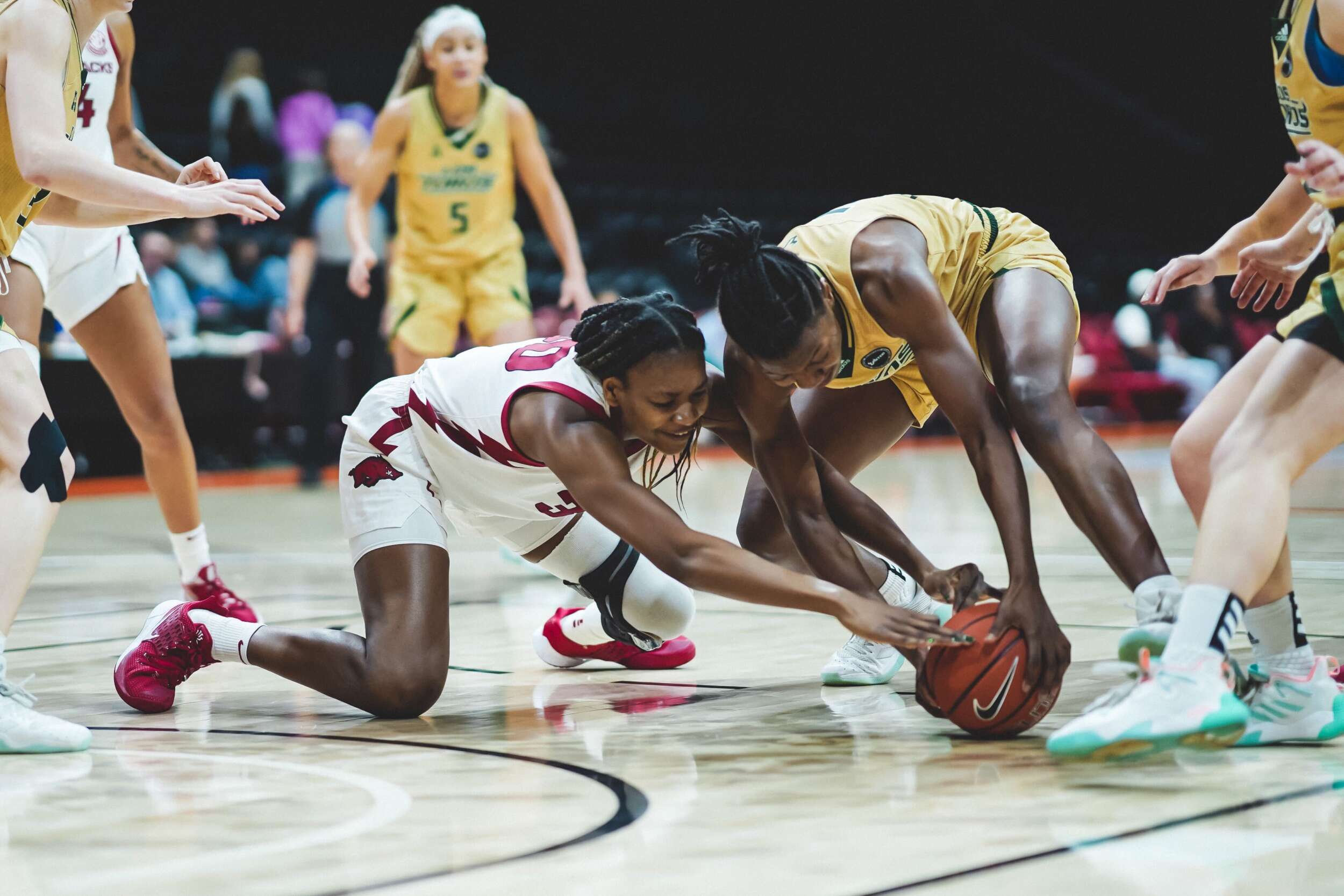 Arkansas Edged Out by USF in Overtime, 66-65

SAN DIEGO – In a defensive battle on day two of the San Diego Invitational, No. 17/19 Arkansas dropped its final non-conference game, falling to USF (11-4) in overtime, 66-65. Arkansas had the three-point edge with 22 seconds left in regulation, but a foul on a 3-pointer sent the Bulls to the line to tie the game at 62. The Razorbacks were outscored 4-3 in overtime to drop its second straight game. Erynn Barnum and Makayla Daniels both dropped 20-pieces with 21 and 20 points, respectively. Arkansas finishes non-conference play 13-2.

In her 100th career start, Daniels helped the Razorbacks get on the board with a 3-pointer. Arkansas fell in a hole, going 0-for-4 from the field until Chrissy Carr made a layup. Daniels kept up the scoring for the Razorbacks, scoring eight of the team’s first 10 points. After USF went 4-for-4 from the field before the media timeout, the Bulls held the 13-10 edge with 3:56 left in the first. After being in a scoring drought for over two minutes, Maryam Dauda helped Arkansas dig out with a layup. Barnum drew a foul to shoot two from the free throw line to pull Arkansas ahead 14-13 after one quarter.

After USF pulled back ahead with a triple, Arkansas retook the lead thanks to a Saylor Poffenbarger 3-pointer and then Barnum broke the Razorbacks’ two-minute drought with a layup. Arkansas led 21-16 with 5:30 left in the second quarter. Arkansas pushed on an 11-0 run while holding USF in a scoring drought for eight minutes and some change. In a defensive battle, the Razorbacks held USF to just five second quarter points and had a 27-18 advantage at the half.

USF opened the quarter on an 11-7 run, as Arkansas led 34-29 with 6:26 left in the third quarter. Arkansas started to feel a groove from beyond the arc, as Daniels and Carr nailed down triples on back-to-back possessions. USF then cruised on a 12-0 run, as Arkansas trailed 45-40 with less than two minutes left in the frame. Samara Spencer helped the Razorbacks find a spark on the offensive side of the ball, and after converting a 3-point play, crept Arkansas within one point. Daniels drew a foul with less than a minute left, and after knocking down both freebies, the Razorbacks held a one-point advantage, 46-45, going into the final 10 minutes of action.

The Bulls scored the first five points in the fourth quarter to take a four-point lead, but a Daniels 3-pointer inched the team back within one. Arkansas was down 50-49 with 7:36 remaining in the game. Barnum tied the game back up after making one of two free throws, and after USF went back up with a 3-pointer, Barnum registered a layup to help Arkansas retake the one-point lead. At the media timeout, Arkansas led 56-53. USF made back-to-back layups to go back ahead, but a Carr triple elevated the Razorbacks back ahead, 59-57 with 2:26 left in the game. USF tied the game back up at 59 with 1:11 left. Spencer made 1-of-2 foul shots while Daniels made both of hers to put the Razorbacks ahead by three, 62-59, but Arkansas fouled on a 3-pointer, and after USF made all three shots, the Bulls tied the game at 62. Arkansas was unable to get a game-winning play, sending the game into overtime.

Arkansas will take a week off and then open SEC play with LSU on Thursday, Dec. 29 at 6 p.m. Coverage of the game will be broadcast on ESPN2 and tickets for the game are still available