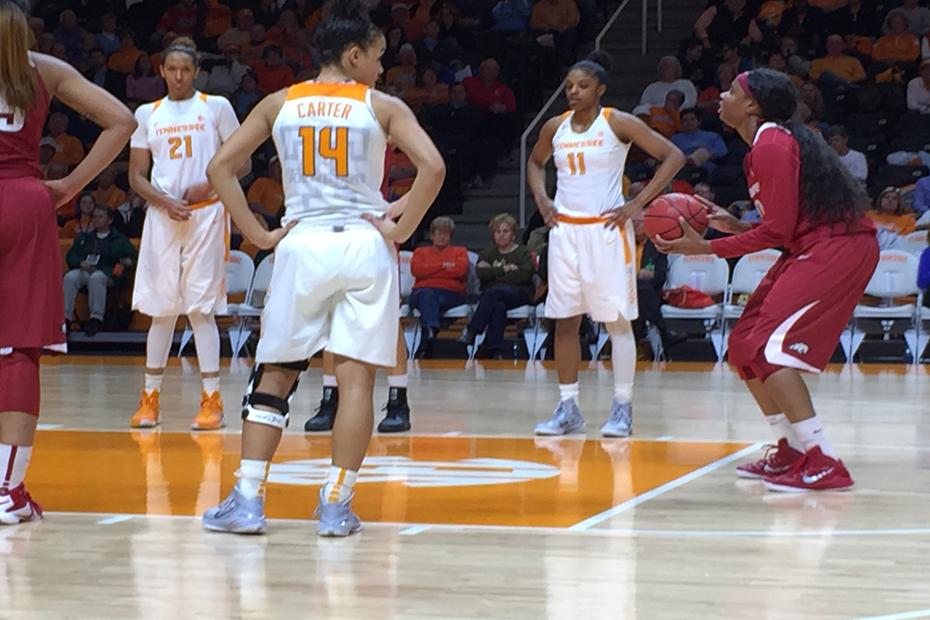 Arkansas Falls at No. 23 Tennessee

KNOXVILLE, Tenn. – Down by double figures in the third period, the University of Arkansas women’s basketball team made a furious comeback to close within five but it wasn’t enough as the Razorbacks fell 75-57 at No. 23 Tennessee in Knoxville, Tennessee Thursday.

Junior Jessica Jackson and sophomore Devin Cosper finished in double figures with 18 and 17 respectively, and Arkansas went 8-for-9 from the line but couldn’t overcome the first half Lady Vols lead, splitting the series with Tennessee this year.

After staying even with the Lady Vols in the first period, Arkansas opened the second frame on a 4-0 run and tied the game at 24. Tennessee answered with an 8-0 run, stretching their lead to eight at the mid-point of the period. Arkansas hit a dry spell offensively going 1-for-6 and committing a couple of ill-timed turnovers.

Tennessee lit it up from beyond the arc in the first half hitting 6-for-13 from distance – better than their four three-pointers per game average. Arkansas went 1-for-13 to finish the half and trailed, 41-27 at the break.

The Razorbacks were good on the boards in the first half, trailing by one, 19-18 but eight turnovers and 11 UT points off those miscues were a factor in the halftime deficit.

The game seemed out of reach at the break but Arkansas had a great third period out-scoring Tennessee 19-15. The Razorbacks made a run and got within five points, 51-46, with 1:35 to go in the frame but the Lady Vols closed with a 5-0 run to lead by 10 heading into the final frame.

Arkansas mixed up defenses all game long trying to slow the Tennessee offense but go-to player six-foot, six-inch Mercedes Russell was a load to handle in the paint. She finished with 15 points and 11 rebounds to lead the Lady Vols.

Jackson and senior Melissa Wolff paced Arkansas on the boards with eight and seven but UT’s bench outscored the Razorbacks 22-9 in the loss.

The Razorbacks are off on Sunday instead hosting Vanderbilt Monday at 6 p.m. in Bud Walton Arena.

NOTES
• Arkansas Starters: Jessica Jackson, Kelsey Brooks, Devin Cosper, Melissa Wolff, Alecia Cooley
• Arkansas scored 19 points in the first period – the most points in 1P by Arkansas since a 20-point effort against New Orleans Dec. 30
• The game was tied for 1:55 in the first half
• Arkansas finished the first half going 1-for-13 and did not score in the final 3:10 of the second period
• Junior Jessica Jackson finished with 18 points
o It is her 20th game of the year in double figures and the 71st of her career
• Sophomore Devin Cosper finished with 17 points
o It is her 12th game as a Razorback scoring double figures