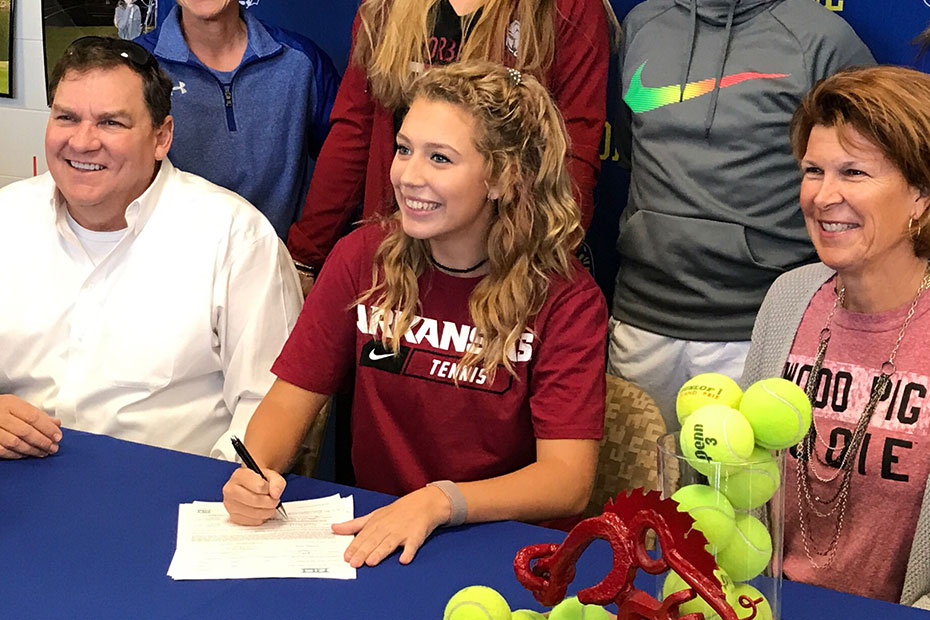 Rice of Lakeside High School is rated the No. 1 player in the state of Arkansas, No. 45 overall recruit in the nation and is listed as a five star prospect by TennisRecruiting.net

“We are thrilled with Thea’s signing to officially become a Razorback,” Hegarty said. “About three years ago it became clear that we had some serious SEC caliber talent in Hot Springs. What impresses me most about Thea is that she is the full package, an elite student, athlete and fierce competitor. This is a great day for the Razorbacks.”

Rice, who is set to graduate high school with honors, will join a Razorback program that has made nine NCAA Tournament appearances since 2006, including two trips to the Sweet Sixteen and a run to the Elite Eight in 2008. She is the daughter of Paul and Tracy Webb Rice and has a brother and sister.

Rice’s grandfather, Brooks Rice, is a member of the Arkansas Track and Field Hall of Fame, while her mother, Tracy, was the starting point guard for the Arkansas women’s basketball team from 1983-87.

The leader of a recruiting class that put Arkansas on the map, Tracy helped the Razorbacks earn their first NCAA Tournament berth and win the National Women’s Invitational Tournament. After leading Arkansas to four consecutive 20-win seasons, she finished her career holding almost all of the school’s assist and steal records and became the first Razorback to be named to the All-Southwest Conference first team. In addition, she was the fourth Arkansas women’s basketball player inducted into the Arkansas Sports Hall of Honor.