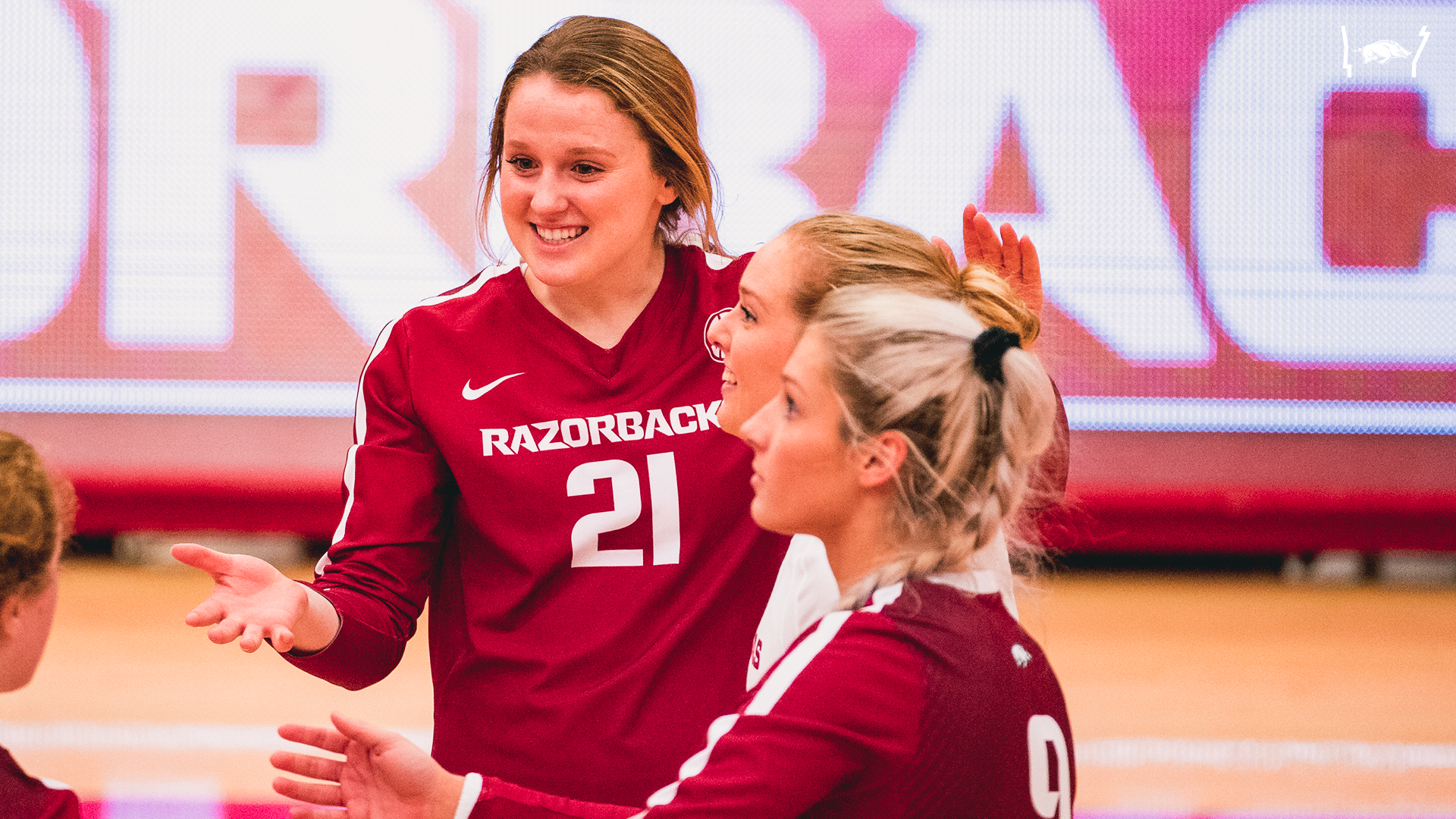 Arkansas battled back from a slow start and a first-set loss to take the second and third sets from the Bulldogs and giving the Razorbacks a 2-1 match advantage. The Hogs commanded the entirety of the second set, forcing Bulldog attack errors and keeping control of the serve. Junior Gracie Ryan fired off three-straight service aces mid-way through the second set to give her team a 17-13 lead that would hold until the end of the set.

Ryan would close out the thrilling win with 49 assists, a career-high for the Florida native. Ryan’s performance is the best by a Razorback setter since former Hog, Rachel Rippee’s 51 assists at NC State in 2018.

A crucial three-point scoring run and a kill by sophomore Jillian Gillen helped Arkansas recover from a deficit late in the third set and take the match lead with a 25-23, set-three win.

After State managed to tie the match at two sets apiece in the fourth, Arkansas wasted no time switching the momentum back into their favor for the fifth and final set, charging out the gates and taking five of the first seven points of the set. The Razorbacks never relinquished the lead in the fifth set and just as she closed the third set, Gillen came in clutch once again with a match-winning kill for the Hogs.

Hear from the Hogs

“It felt so great to actually transfer all the hard work to the court today,” said freshman Taylor Head. Head made her collegiate debut for Arkansas today and made sure her presence was felt on the court, finishing with an impressive double-double (16 kills, 18 digs). “I was nervous at first, but once I was out there with my teammates it felt so natural. I’m so proud of everyone for continuing to push through the first five-setter of the season and we are so excited for tomorrow and the rest of the fall!”

“It was good to play volleyball again,” said head coach Jason Watson. “A lot of people have worked hard to provide this opportunity for our team and our student-athletes – for that, we are all extremely thankful.”

“Today’s match was nothing short of a battle. It took us some time to get into a rhythm, and Mississippi State played clean, something that would prove to hurt us early and throughout the match. Really pleased that we found ourselves towards the end. We have some things to work out, as competition exposes some things, but in all, a good day in the gym”

Arkansas and Mississippi State will play against at 12-noon on Sunday (Oct. 18). Sunday’s match will be aired on ESPNU.