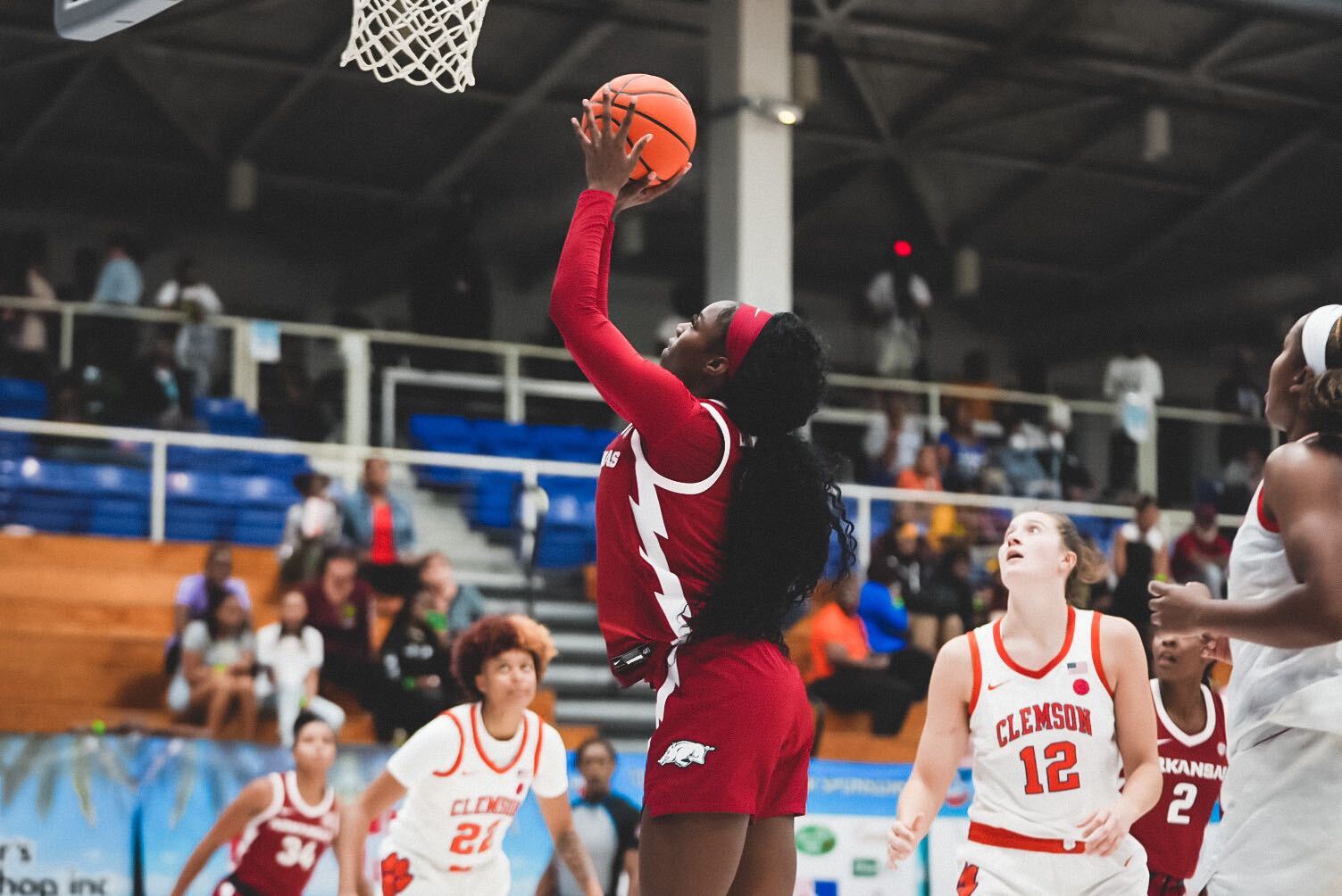 Arkansas Pours it on Second Half to Defeat Clemson

ST. THOMAS, USVI – Arkansas women’s basketball (7-0) pulled out a hard-fought victory over Clemson (3-3) on day two of the Paradise Jam to maintain its perfect start to the season and best since 2016. With the game tied at 24 at halftime, Arkansas caught fire in the third quarter to outscore the Tigers 25-13 to take a 12-point lead into the fourth quarter. The Razorbacks won 76-62 off 47.9 percent shooting, and will face Kansas State in the championship title game tomorrow. Four Razorbacks reached double-digits on Friday, led by Makayla Daniels’ 21.

Arkansas began the game on a 10-2 run, which was sparked by a Chrissy Carr 3-pointer. Clemson then took a 6-0 run of its own to cut the Razorback lead to two. Out of the break and Arkansas with the 10-8 edge, Clemson tied the game off a layup. Daniels then knocked down two free throws and followed that up with a 3-pointer to elevate the Razorbacks ahead by five. The Tigers quickly knotted things up at 15 after 10 minutes of play.

Saylor Poffenbarger banked in a 3-pointer to help the Razorbacks go back ahead by three a few minutes into the quarter. Daniels then converted a layup following a steal and at the media timeout, Arkansas was ahead 22-19 with 4:52 left in the half. Clemson retook the lead, 24-22, until Erynn Barnum put up a layup to tie up the game at the half at 24, all. Arkansas shot 29.2 percent from the field in the first half.

As soon as Arkansas would get a basket, Clemson would tie things up on three different occasions to open the second half. The score was tied at 31 just three minutes into the third quarter until the Razorbacks cruised on an 8-0 run. As part of that run, Daniels drained a 3-pointer and Barnum drew a foul on a layup to convert the 3-point play. Clemson took a timeout, as Arkansas led 39-31 halfway through the frame. Arkansas held the Tigers scoreless for three minutes until they found an opportunity under the basket for a layup. Daniels then had two 3-point plays, as Arkansas led 43-35. Rylee Langerman’s putback and Poffenbarger’s driving layup at the buzzer closed out a 10-4 run and the Razorbacks were in front, 49-37.

Poffenbarger knocked down a triple to start things off for the Razorbacks in the fourth quarter. Carr then went crazy, knocking down back-to-back-to-back 3-pointers to extend the Arkansas lead to 21, the team’s largest lead of the night, with 6:58 left in the game. After a few technical fouls issued to both teams and Clemson finding its stride from the field, the Tigers came within 10 points, as Arkansas led 65-55 with 3:31 remaining in the contest. Arkansas was poised down the stretch from the charity stripe, making 8-of-10 foul shots to seal the 76-62 victory.

Arkansas will close out the Paradise Jam tomorrow with a matchup versus No. 25 Kansas State. Tipoff is set for 7 p.m. CT, 9 p.m. local time on ESPN3.