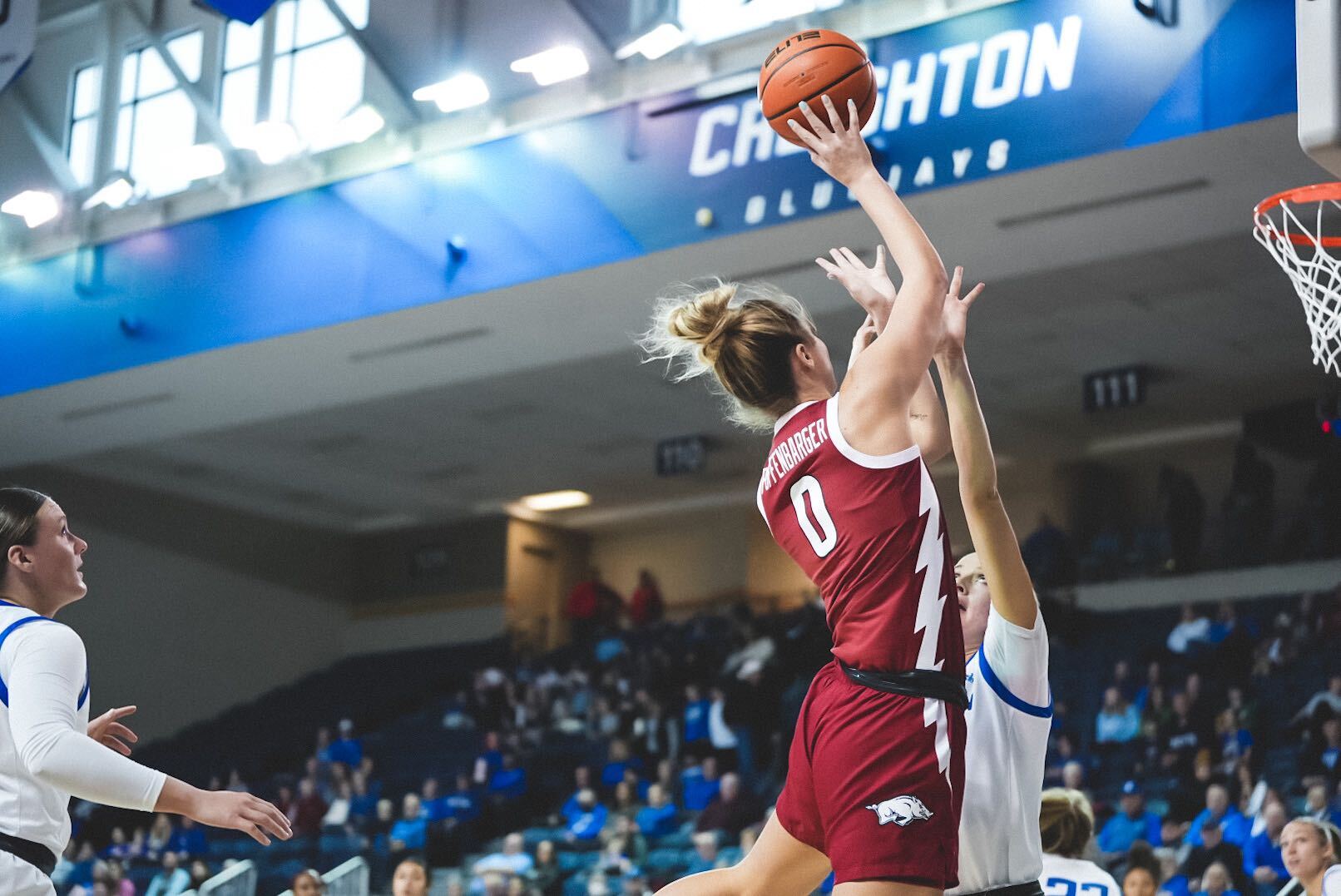 Arkansas Remains Undefeated with Victory at No. 16 Creighton

OMAHA, Neb. – In the only top-25 matchup of the day in NCAA DI women’s basketball, the No. 21/22 Arkansas women’s basketball team (13-0) earned a statement win at No. 16 Creighton, 83-75. Arkansas was paced by four players in double digits, led by Samara Spencer’s 26 points and Saylor Poffenbarger’s third double-double of the season (16 points and 11 rebounds). The Razorbacks’ 13-0 start matches the best start for the program since 2013.

Spencer got the Razorbacks rolling, scoring the team’s first eight points, as Arkansas led 8-3 in the opening three minutes of the game. The Razorbacks continued to lead until the Bluejays knocked down a 3-pointer to then trail 10-9 at the media timeout with 4:49 left in the first quarter. Poffenbarger’s jumper put the Razorbacks back up for a minute, but Creighton made 4-of-5 field goals to lead 17-13 with less than a minute left in the quarter.

With the Razorbacks down 17-13 after 10 minutes, Erynn Barnum made a hard-fought layup to cut the deficit to two. The Bluejays went cold from the field, but kept going to the line, scoring their next five points off freebies, as Arkansas trailed 22-16 with seven minutes left in the quarter. Arkansas went on a 5-0 run, courtesy of a Spencer jumper and a 3-point play by Barnum. The Bluejays then made two free throws, as the Razorbacks trailed 24-21 with 4:40 left in the frame. Spencer tied the game out of the media timeout with a 3-pointer, but Creighton responded on the other end with a triple of their own to spark a 9-4 run. After head coach Mike Neighbors called a timeout, Rylee Langerman knocked down back-to-back 3-pointers and Spencer followed with one of her own to help the Razorbacks end the quarter on a 9-0 run to lead 37-33 at the half.

Poffenbarger opened the quarter with a jumper, and then the Razorbacks got four freebies after a Creighton player was assessed with a technical foul. Arkansas made three of four free throws and Makayla Daniels followed with a 3-pointer. The Razorbacks led 45-35 with 8:39 left in the third. Creighton sparked a 7-0 run to cut the lead to three, but Arkansas made back-to-back baskets to go up by seven. At the media timeout with 4:54 left in the third, Arkansas led 52-47. The Razorbacks went on a 9-4 run, and after a Spencer 3-pointer, Arkansas led by 10. Creighton would not go away, coming up with big shots, but Maryam Dauda knocked down a triple to put the Razorbacks up by 11 with 2:35 left in the quarter. The Razorbacks entered the final quarter of a play with an eight-point lead, up 61-53.

Creighton started the fourth quarter with a basket, but then fell in a scoring drought for over two minutes. Barnum made a pair of free throws, as Arkansas went back up by 10. The Bluejays went on a 4-0 run, but Barnum dug the Razorbacks out of their drought from the field with a layup. Poffenbarger rolled in a 3-pointer and Barnum followed by a layup, and the Razorbacks extended their lead to 11, 72-61, with 4:19 remaining in the game. Creighton came out of the media timeout with a 4-0 run, but Poffenbarger responded with a 3-pointer. Costly turnovers gave Creighton more opportunities, and as Neighbors called a timeout, Arkansas led 75-69 with 2:44 left in the game. Spencer came up with a big layup, but Creighton matched, and the Razorbacks were ahead 77-73 with 42 seconds left in the contest. A two-possession game for the last minute of the game, Daniels and Poffenbarger knocked down big free throws and the Razorback defense stayed resilient to pull out the win, 83-75.

Arkansas will stay on the road and travel to the West Coast to play in the San Diego Invitational. The Razorbacks will play 16/15 Oregon on Tuesday, Dec. 20 at 3 p.m. Central, and will play either No. ¾ Ohio State or USF on Wednesday, Dec. 21.