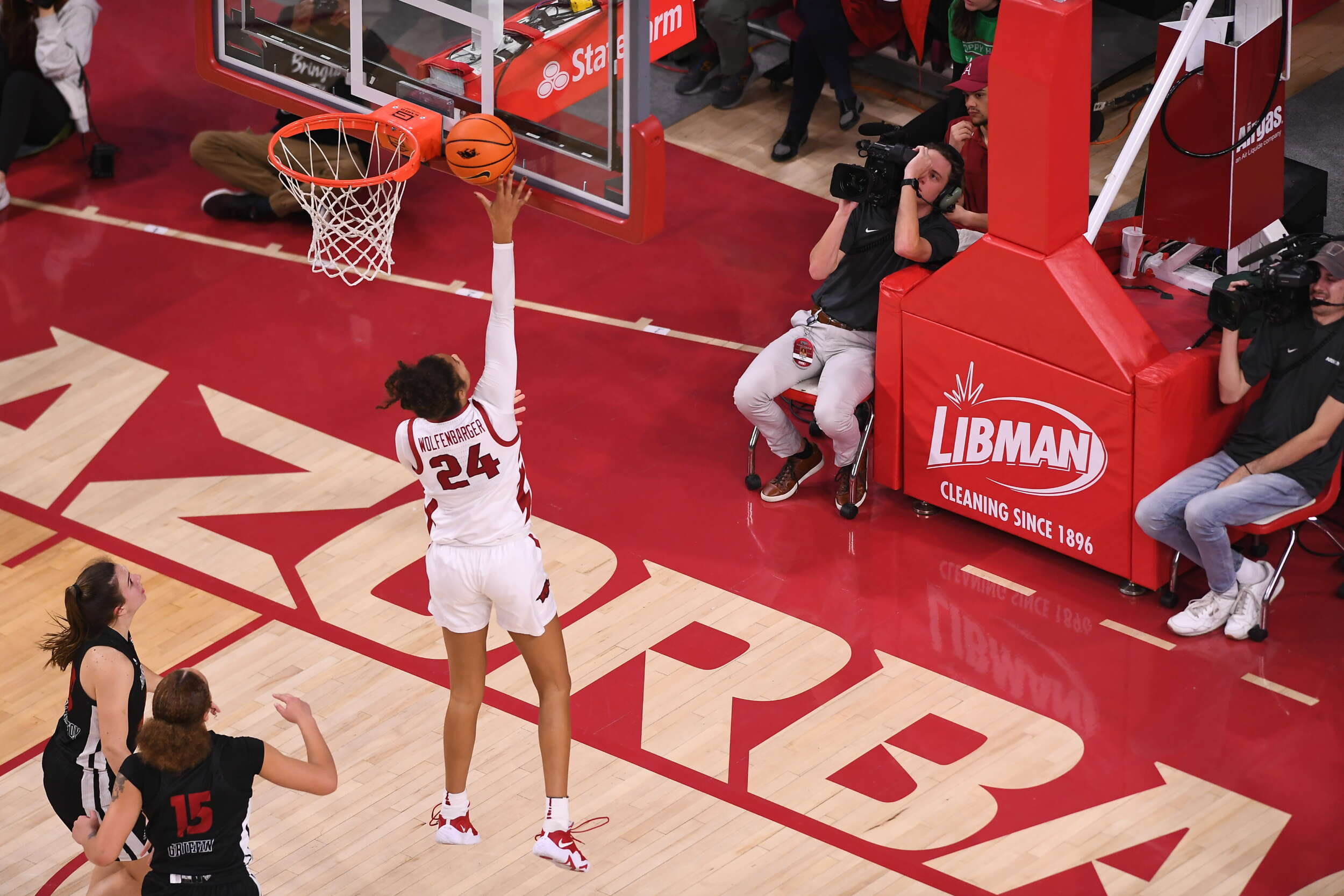 FAYETTEVILLE – The Arkansas women’s basketball team (12-0) delivered when it counted once again, taking down in-state foe Arkansas State, 77-63. In a competitive game, Arkansas’ defense stepped up in the fourth quarter, as the Razorbacks held the Red Wolves to 0-for-7 from the field in the final stretch of the game. Arkansas played seven players, five of which reached double figures, led by Samara Spencer’s 19 points. For the second straight season, Arkansas has defeated all four in-state opponents.

The Razorbacks got the offensive power going early thanks to back-to-back 3-pointers courtesy of Jersey Wolfenbarger and Chrissy Carr. Arkansas State was also making shots, shooting 71% in the first half of the quarter. After two nice Erynn Barnum layups, Arkansas led 16-13 at the media timeout with 4:33 left in the opening quarter. Out of the break, Arkansas found trouble from the field, shooting 0-for-5, but the Razorbacks got in the bonus early and made six free throws down the stretch of the first quarter. Maryam Dauda helped the Razorbacks dig out of their drought from the field with back-to-back layups. Arkansas finished the first 10 minutes with a slight 24-23 advantage.

Barnum opened the second quarter with a layup. The Red Wolves would then tie the game at 28 off a 3-pointer, while Arkansas hit a scoring drought for two minutes and some change. Dauda continued to come up big for the Razorbacks, and with 3:48 left in the half, Arkansas led, 34-30. Arkansas went on a 6-0 run, leading 40-33 with a minute left in the half. A Wolfenbarger 3-pointer extended the Razorback lead to 10, their first double-digit lead of the game. At the half, Arkansas led 43-35.

Barnum quickly moved her way up to double digits with two layups to begin the third quarter. Just a minute and a half into the second half, Arkansas had the 47-35 edge. Wolfenbarger continued to find her groove and came up with a layup to extend her season-high to 12 points. The Razorbacks outscored the Red Wolves 15-8 in the first seven minutes of the third quarter, but Arkansas State would not go away, as Arkansas had a slight 60-51 advantage going into the fourth quarter of play.

Carr delivered a big 3-pointer to extend the Razorbacks’ lead back up to 10 to begin the fourth quarter, but the Red Wolves started to catch fire from 3-point and cut the lead to six, 65-59, with 7:07 remaining in the game. Samara Spencer logged two big 3-pointers to extend the Razorback lead back to 12, 73-61, with 3:21 left in the game, and that’s when the Razorbacks started to really pull away. Arkansas State shot 0-for-7 from the field and hit a scoring drought for the those final three minutes, as Arkansas sailed away with 77-63 win.

The Razorbacks will finish out the non-conference slate away from home, starting with an away matchup at Creighton on Saturday, Dec. 17 at 1 p.m. Coverage of the game will be broadcast on FloSports.