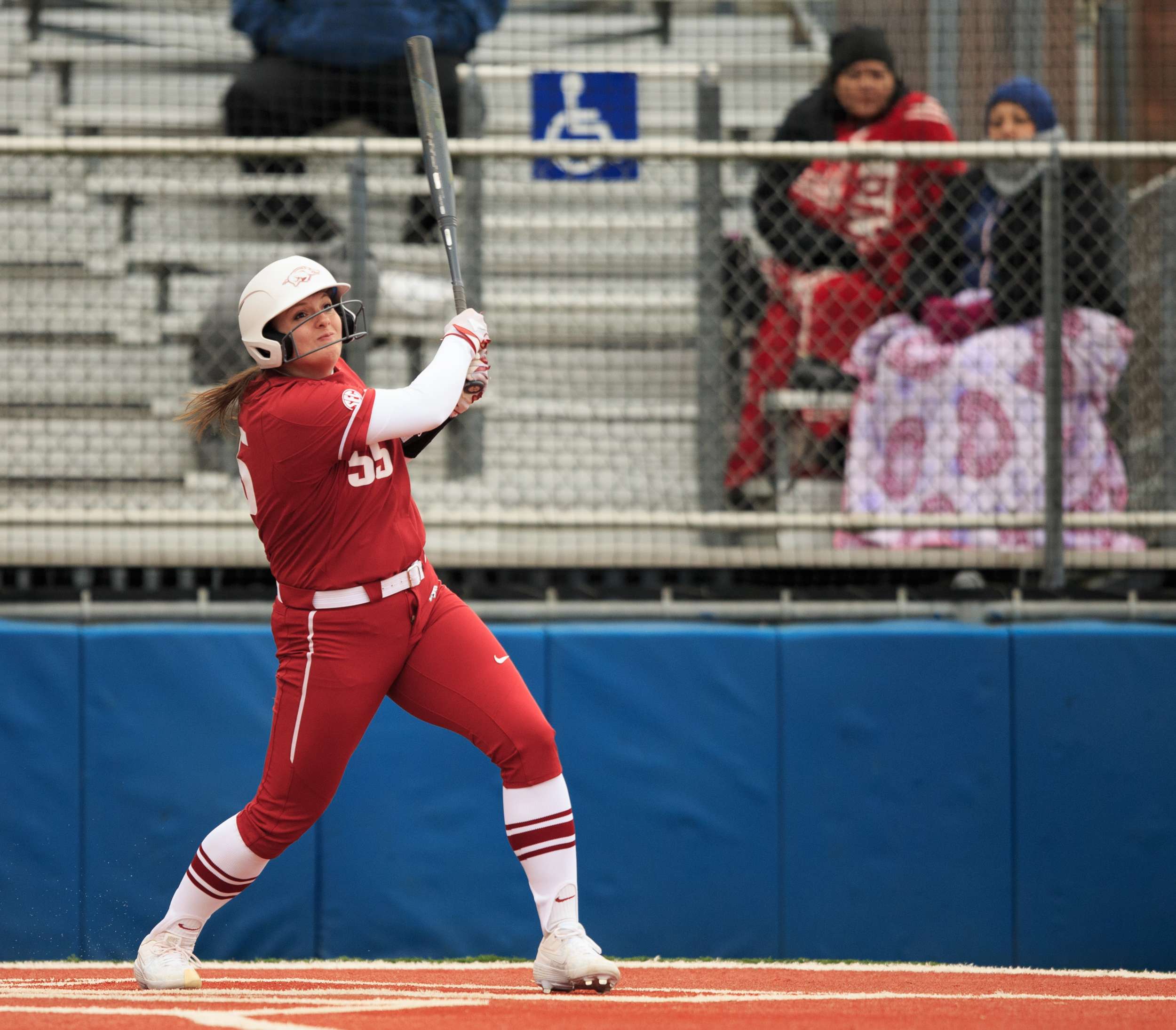 LAKE CHARLES, La. – The University of Arkansas softball team was in mid-season form on Friday (Feb. 8) as they took down both opponents on day one of the Cowgirl Classic. Now sitting at 2-0 one day into their 2019 campaign, the Razorbacks opened with a 7-3 victory over Campbell and capped their day with a statement 6-0 win over McNeese. Junior Autumn Storms and sophomore Mary Haff each recorded a win in the circle.

The Razorbacks will return to Joe Miller Ballpark on Saturday (Feb. 9) for day two of the Cowgirl Classic, taking on Samford at 12:30 p.m. (CT) and Lipscomb at 3:00 p.m. (CT). While Lipscomb is a never-faced opponent, Arkansas has matched up against Samford once before, defeating the Bulldogs in Hattiesburg, Miss. in 2009 (6-2).

Arkansas came out strong; with Hannah McEwen reaching first base on balls, sophomore transfer Danielle Gibson followed with a single through the right side. Now with Hogs on first and second, senior Katie Warrick stepped up to the plate and sent one up the middle, loading the bases for hot-hitter Ashley Diaz. Diaz hit her first double of the game, a grounder up the middle, scoring McEwen and Gibson.

With the bases loaded, Gibson returned to the plate in the second inning, where she put the ball in play, allowing Sydney Parr and Maggie Hicks to score. Warrick reached first on a fielder’s choice and Diaz followed with her second double of the game. The Razorbacks now had two in scoring position, with two outs, and Kayla Green up to bat.

A Campbell error would send Warrick and Diaz over home plate, giving Arkansas a 6-0 lead after two innings of play.

It would be in the sixth inning, that Gibson reached on a triple down the left-field line, putting her in prime scoring position for Diaz. Diaz beautifully executed the sacrifice fly, floating her hit deep into right field, giving Gibson the chance to score.

The Fighting Camels were not going down without a fight, rallying in the sixth inning for three runs. Storms and the Razorbacks regrouped and closed out the inning with a 5-3 play by Bugarin.

The seventh inning would yield no additional runs for either team and Arkansas would escape a feisty Campbell comeback attempt and hold onto the 7-3 victory.

It was a defensive battle from the start for the Razorbacks and Cowgirls, as the two teams entered the fourth inning scoreless.

Warrick would be the one to step up to the plate and take a 1-2 count from McNeese’s Alex Flores over the left field wall for Arkansas’ first run of the game.

The Razorbacks saw two Cowgirls on base in the fourth, but a leaping catch by Hicks would send the runners back to the dugout as Arkansas held onto its one-run lead headed into the fifth inning.

Arkansas wasted no time pushing its lead out to six runs, batting through the lineup in the fifth inning. The rally began with one out on the board and Hicks and Parr on first and second. McEwen soared a 1-0 pitch over the right-center wall, clearing the bases and giving the Razorbacks a 4-0 lead.

Gibson followed suit and hit a double off the right-center wall, forcing McNeese to make a call to their bull-pen. The Cowgirls would sub out junior Alex Flores for her sister, freshman right-handed pitcher Saleen Flores.

Warrick used her power at the plate once more, to single in right center and score pinch runner Carley Haizlip. Freshman Sam Torres would be called upon to pinch run for Warrick and would make her way around the bases to score, thanks to a ball in play by Diaz and a single to left center by Green.

Now leading 6-0, the Razorbacks had only to hold strong defensively to outlast the McNeese Cowgirls, and that’s exactly what they did.

With Haff on the mound, the Razorbacks allowed only one hit from the Cowgirls, a short fly ball onto the green in left field. Freshman Sam Torres tore up the turf and dove to make the catch, but the perfectly placed ball fell just short of her glove.

Arkansas did not loosen the reins until the shutout was complete, burning through the sixth and seventh innings with a defensively strong hold. Not only did McNeese go scoreless on their home turf tonight, a feat that has not been achieve by an opponent since April of 2017, not a single Cowgirl reach third base through seven innings of play.

Arkansas’ series with McNeese advances to 3-1 with the 6-0 win, the shutout is Haff’s 12th of her career.