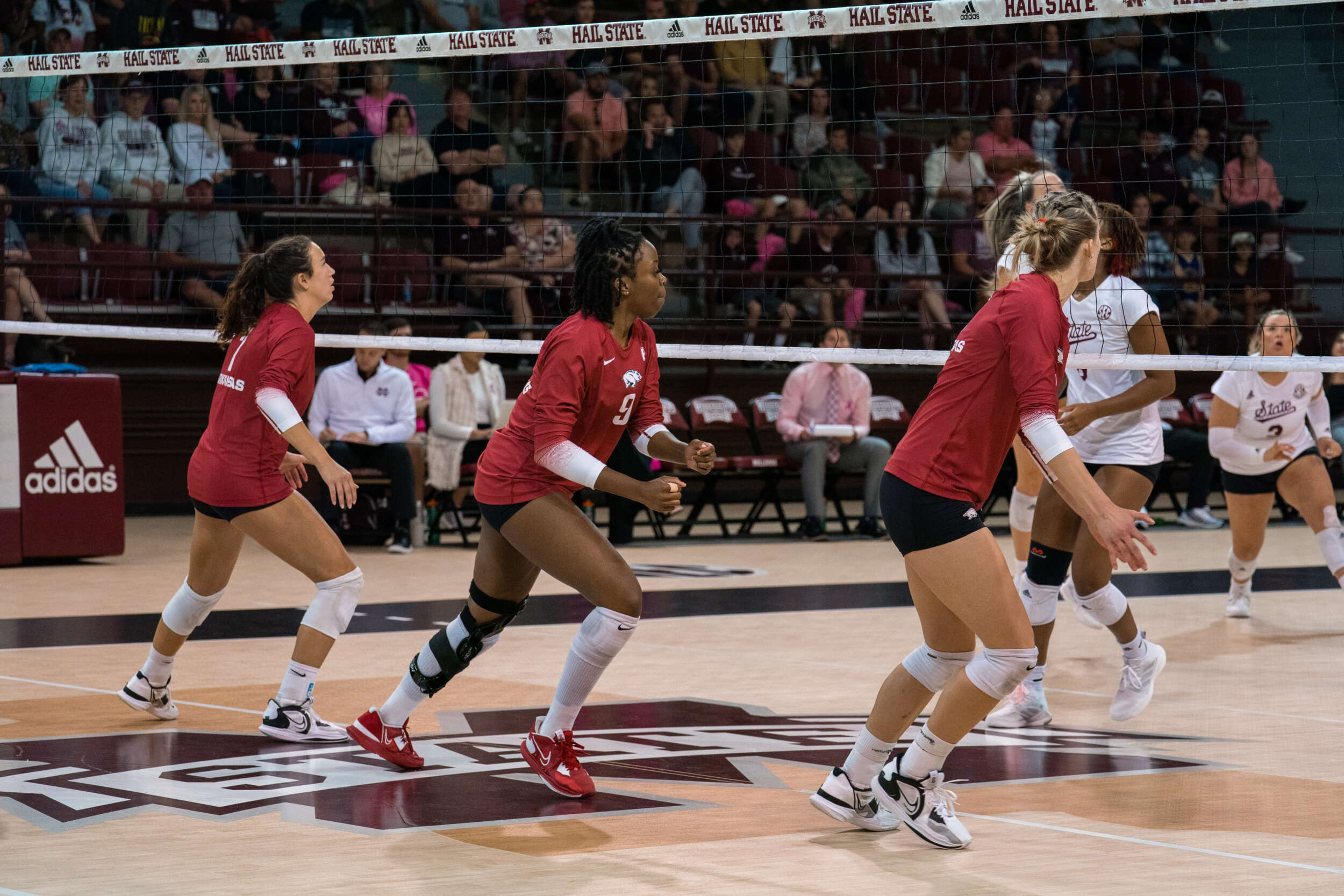 The No. 23 Razorbacks entered Sunday’s match looking to respond after being swept for the first time this season the night before, and the Hogs did just that with a 3-2 win over the Mississippi State Bulldogs.

The home team claimed the first set just like Saturday, but Arkansas took a 2-1 lead after three. A late Bulldog comeback sealed a 25-23 set four final for Mississippi State and evened the match, but the Razorback offense was unstoppable and hit a blistering .615 in the fifth for Arkansas’ first five-set victory this season.

Arkansas’ offensive play was as balanced as it could be in Sunday’s series finale, and four Hogs registered 10+ kills in Jill Gillen, Taylor Head, Hailey Dirrigl and Maggie Cartwright. Gillen led the way with 16, while Head was just behind with 12 kills and 10 digs for a double-double. Dirrigl also had a dozen kills on 24 swings with just one error for a team-high .458 hitting percentage.

Graduate middle blocker Tatum Shipes made a big impact on both sides of the ball on the day with a match-high six blocks and three service aces, and a season-high seven kills.

Set 1
The opening set started close between the two teams, but the Bulldogs pulled away with a 10-5 run and went up by five at the media timeout. They tacked on two more points for a 17-10 edge, which prompted Arkansas to call time. Mississippi State maintained a seven-point lead as the Bulldogs went over 20 points, and the Hogs answered with only two more. An Arkansas service error then closed the opening frame 25-15 in favor of MSU.

Set 2
There were six ties midway through the second set with neither team giving the other much breathing room, but a 4-0 Hog run spurred by a kill from Maggie Cartwright and capped off by an ace from Gracie Ryan made it 13-10 Hogs. Mississippi State regrouped with a timeout, but Arkansas remained in control and didn’t let the Bulldogs cut the lead to less than two. The Hogs hit 20 first with a kill from Cartwright, and the home team huddled again. Ryan answered with another ace, and while the Bulldogs added a pair of points, three straight Arkansas kills finished the second off 25-19 for the Razorbacks and knotted the match at 1-1.

Set 3
The Hogs wasted no time in the third set and immediately hit the gas for a 5-1 lead early. Mississippi State couldn’t generate any momentum out of a timeout, and the Razorbacks continued to pour on with a 7-2 run capped off by back-to-back aces from sophomore setter Hannah Hogue. The Bulldogs called time again down 12-3, but couldn’t piece together more than two points at a time, which kept the Razorbacks fully in control. Arkansas never led by less than five after that, and a kill from Gillen brought up set point. Mississippi State got one back through a service error, but Dirrigl laid down a kill for the 25-18 victory and a 2-1 Arkansas lead in the match.

Set 4
Early errors by the home team gave Arkansas a 6-3 cushion in the fourth, but the Bulldogs added three straight to tie it up, and did again at 8-8. A 3-0 Hog run sent the Bulldogs to a huddle, and while they came within one a few times, Arkansas extended the edge to four at 19-15 with two kills from Head and one from Dirrigl. Mississippi State wanted time after that, but Arkansas stayed steady and pushed the lead to 22-19 off a kill from Gillen. The Bulldogs then answered with four straight points and took a narrow 23-22 lead. Arkansas evened it again, but a service error put set point in MSU’s hands, and the Bulldogs finished it 25-23 with a kill and forced a fifth set.

Set 5
MSU got the first point in the deciding set, but Arkansas settled in and quickly got the lead thanks to a four-point run, kicked off by a kill from Dirrigl. Abigail Archibong made it a five-point advantage for Arkansas with a kill and the Razorbacks led 8-3 at the media break. Shortly after, the Bulldogs scored three unanswered points, and Arkansas called time with a comfortable 12-8 lead. Gillen then added a pair of kills to take it to match point, and Head shut the door on the fifth set 15-8 for the 3-2 Arkansas match victory.

Up Next
No. 23 Arkansas hosts No. 18 Kentucky (8-5, 3-1) for a pair of SEC matches this weekend at Barnhill Arena. The series opener is set for Friday, Oct. 7 at 7 p.m. and Saturday’s match will be at 5 p.m. Both matches will be streamed live on SEC Network Plus. Tickets are available online or in person through the Razorback Ticket Center. Adult tickets are only $5 and kids 17 and under get in free.