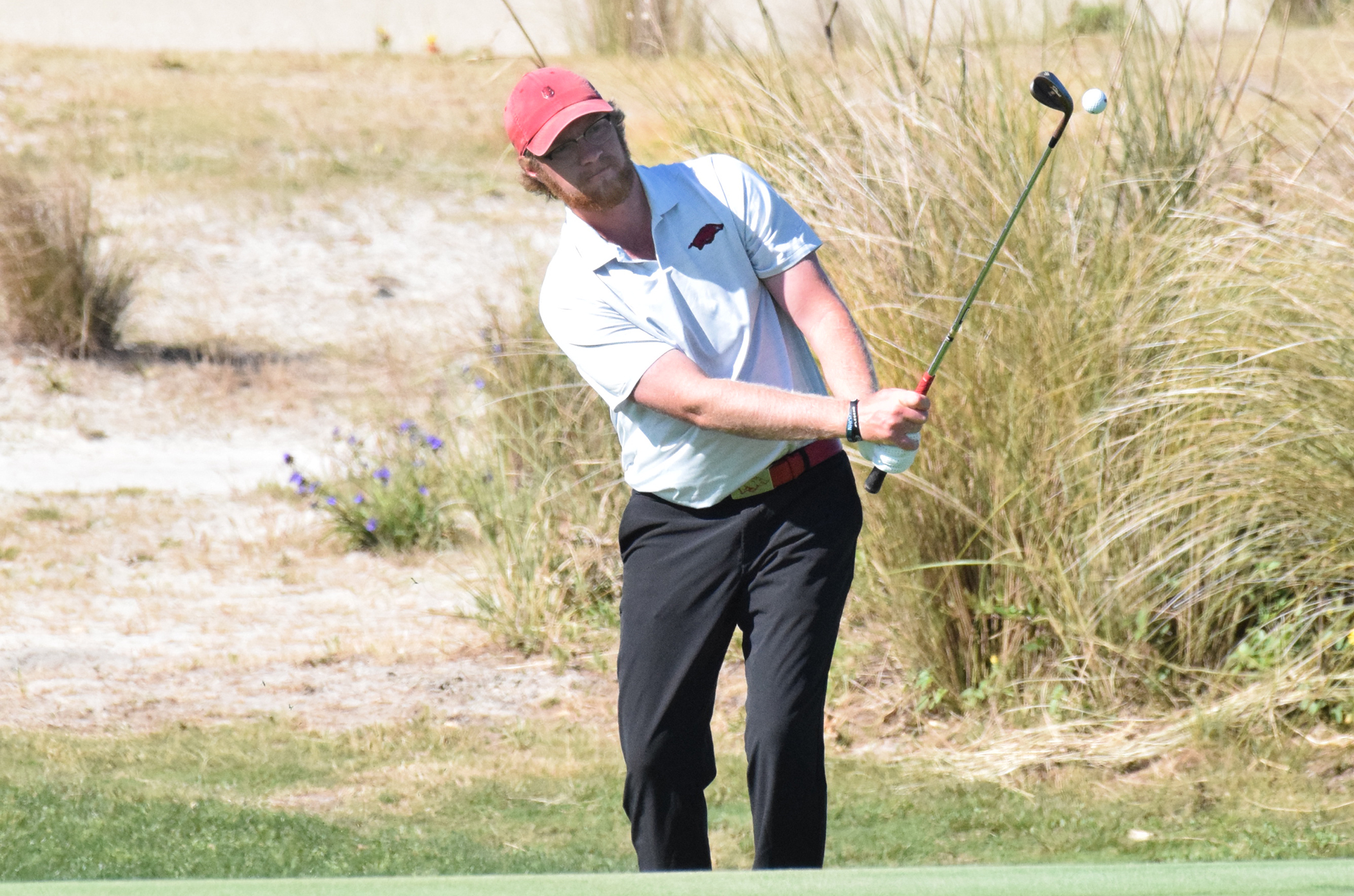 INDEPENDENCE, Minn. – Defending Gopher Invitational champion William Buhl fired a career-best 135 (68-67) and leads the event after 36 holes on Sunday. Thanks to three rounds in the 60’s by the Razorbacks Sunday afternoon, Arkansas shot a second-round-best, 8-under-par 276 and is tied for third with a 36-hole score of 566 at the par-71, 7,368-yard Windsong Farm Golf Course.

The teams battled temperatures in the low 60’s and a steady drizzle as the Razorbacks shot a 6-over-par 290 to stand in sixth place after the morning session. Thanks a 67 by Buhl, a 68 by Julian Perico and 69 by Tyson Reeder in the afternoon, Arkansas rallied to shoot an 8-under-par 276 and move up three spots into a tie for third.

Baylor leads the 13-team field with a 36-hole score of 560. First-round leader Texas A&M slipped to second (563) while Arkansas and West Virginia are tied for third (566). Marquette is fifth at even par and rounded out the list of teams that are at par or better through two rounds.

Buhl, who shot 69-67=136 after two rounds en route to winning last year, only had nine birdies – third best in the field, but holds a one-stroke lead as he only suffered two bogeys, one in each round.

Buhl was 1-over after seven holes in the first round, but had a birdie on the par-5 9th hole to make the turn at even par. He then birdied holes 11, 12 and 13 before reeling off five pars to end round one with a 3-under 68 and stand in fourth place. In the afternoon, Buhl birdied three of this first six holes but dropped a shot to close the front nine. He answered with birdies on holes 12 and 13 to vault into the lead and held on to the top spot with pars on his final five holes.

Tyson Reeder is tied for 15th, posting rounds of 73-69 for an even-par 142. He was one of six players to record an eagle on Sunday, his coming in round one. He recorded three birdies in the afternoon and tallied 28 pars through 36 holes – the second-best total in the field – to move up 13 spots into 15th place.

Mason Overstreet and Luis Garza are tied for 46th, each with a 36-hole total of 148 (+6). Overstreet was even par in the afternoon session while Garza had a pair of 74’s.

Also competing this weekend at the nearby Pioneer Creek Collegiate (Maple Plain, Minn.) were freshman William McDonald and Mauricio Figueroa. McDonald, in his collegiate debut, opened with rounds of 71-71 and finished with a 54-hole score of 220 to tie for 27th while Figueroa tied for 31st (74-73-73=221).

The third and final round of the Gopher Invitational is set for Monday (Sept. 9).