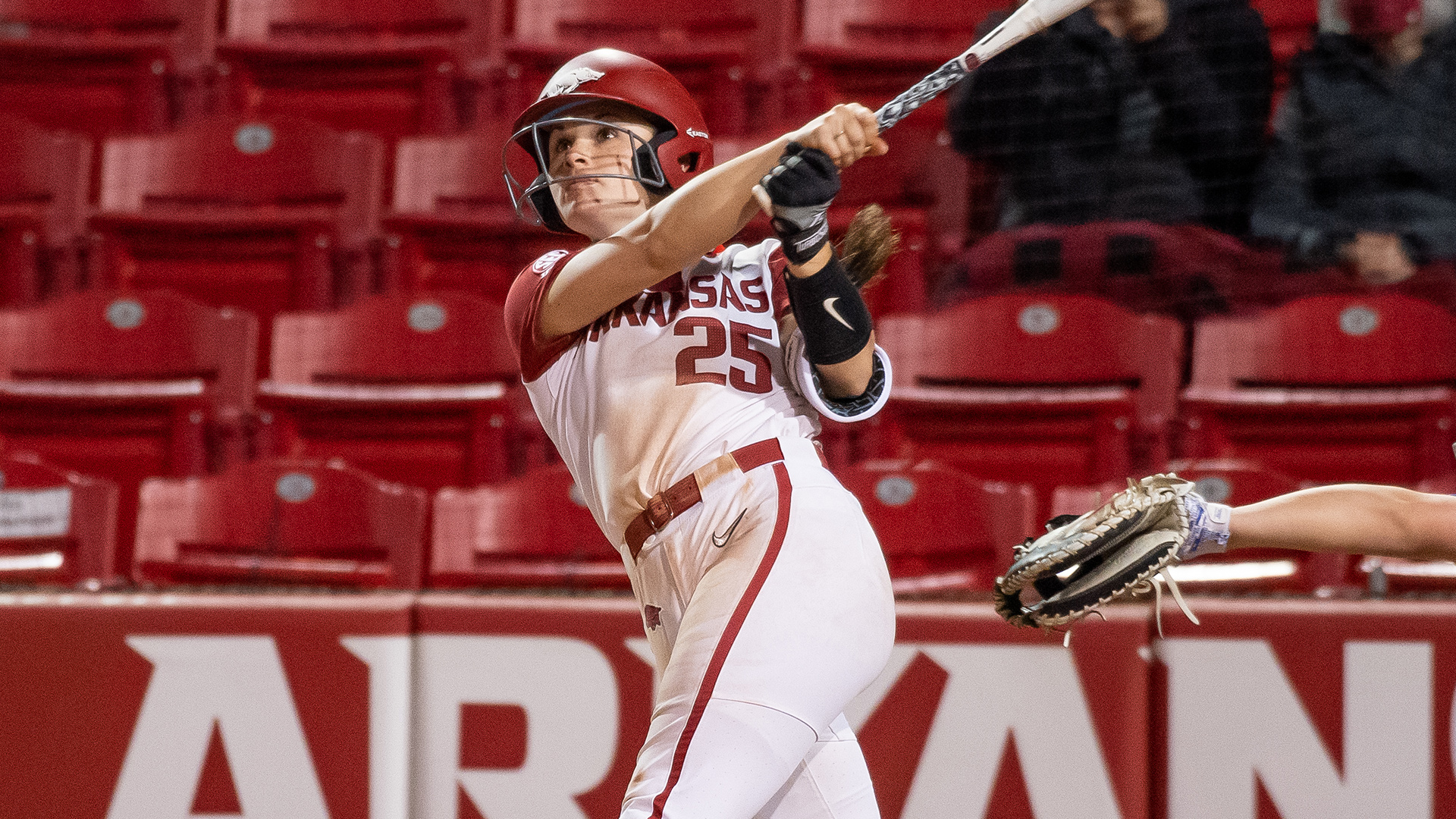 COLUMBIA, S.C. – Infielder Braxton Burnside hit the second of her two homers on the day to left field in the top of the 10th inning, sending No. 19 Arkansas to a 7-5 win in 10 innings over No. 20 South Carolina. The Razorbacks (19-2, 2-0 SEC) pushed their program-record win streak to 18 games and claimed the first two games of the series against the Gamecocks.

Trailing 4-2 entering the sixth inning, the Hogs scored a pair of two out runs in the stanza to tie the game and took a 5-4 lead in the top of the seventh before finishing the job in extras.

Senior infielder Danielle Gibson had a career day at the plate, going 5-for-5 with a pair of doubles and a walk.

Making her first career start against an SEC foe, freshman pitcher Lauren Howell allowed a walk and hit by pitch in the first inning but buckled down and left runners on second and third by striking out back-to-back hitters.

Burnside gave the Razorbacks an early lead in the top of the third, launching her first tank of the day for an opposite field solo home run to right. The Razorbacks increased their lead to 2-0 as Gibson doubled to left and was plated the next hitter on catcher Kayla Green’s two bagger to left.

South Carolina (13-5, 0-2 SEC) answered immediately by putting up a four-run bottom half to take a 4-2 lead. A walk and error got the inning started, and the Gamecocks sent eight batters to the plate totaling four hits.

After two quiet innings, Arkansas’ offense went to work with two outs in the top of the sixth and tied the game, 4-4. All five hitters in the stanza reached with two outs as outfielder Sam Torres reached on an error, Burnside singled and Gibson walked, setting up Green’s bases loaded walk and outfielder Linnie Malkin’s infield single to tie it.

The Hogs grabbed a 5-4 lead in the top of the seventh with designated player Aly Manzo’s leadoff single to center table setting the inning. Infielder Nicole Duncan laid down a sacrifice bunt and pinch runner Audrie LaValley went all the way to third on an errant throw that went wide of second base. Infielder Keely Huffine then lifted a sacrifice fly to center and LaValley slid home, beating the throw.

South Carolina sent the game to extras tied at 5-5 in the home half of the seventh after two singles and a safety squeeze single.

Torres walked in front of Burnside before she tomahawked her second homer of the day to left, her SEC-leading 14th homer of the year and the team’s 51st, giving Arkansas a 7-5 lead it would not relinquish.

Howell went the first 2.0 innings allowing just one hit and two earned runs with two strikeouts. Fellow freshman hurler Allie Light was next in line, throwing 3.0 innings and allowed one run and four hits while fanning two. Mary Haff (12-1) built on her national lead in victories, working the final 5.0 innings and allowed three hits and one earned run with four strikeouts. The Gamecocks used a quartet of arms with Karsen Ochs (2-2) taking the loss in 3.0 innings. She allowed three runs and struck out one.

Arkansas has won both of its extra inning games this season at true road sites and defeated McNeese on Feb. 20, 6-4, in 14 innings. The team’s 13 hits tied its season-high. Arkansas has now won four of its last five games in the all-time series against South Carolina.

The Razorbacks and Gamecocks wrap up the series at noon CT tomorrow, March 14 on SEC Network.