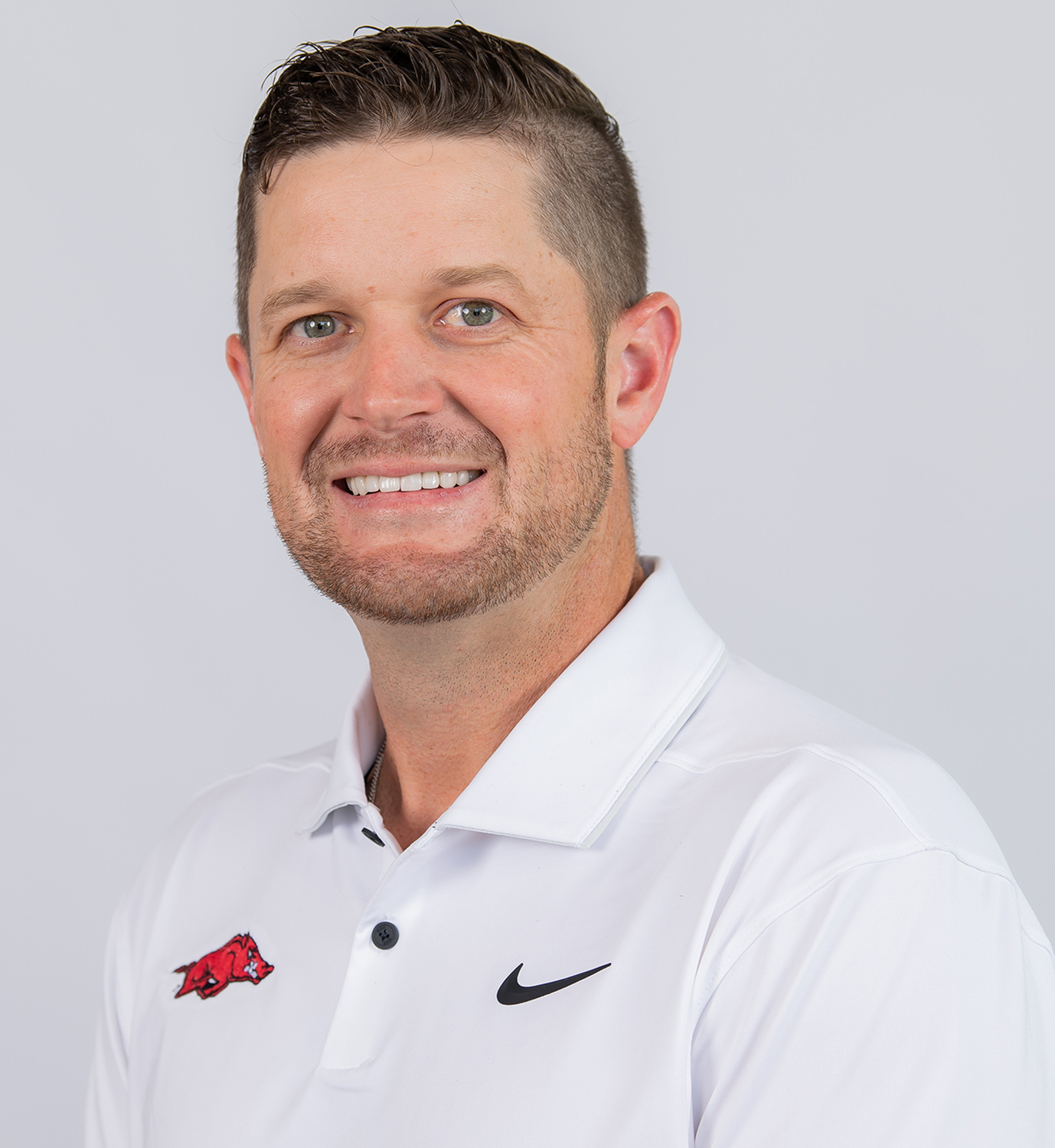 A vital piece of head coach Brad McMakin’s success and having the Arkansas men’s golf team be a national contender year-in and year-out, Barrett Lais is in his 13th season on the Razorback staff at his alma mater. Prior to the 2020-21 season, Lais was promoted to associate head coach.

One of the top assistants in college golf, Lais returned to Arkansas in 2010 following a two-year stint as an assistant coach at the University of Denver. During his 12 years on staff at Arkansas, the Razorbacks have won 25 team titles – including the 2019 SEC Championship – and participated in each of the 11 NCAA Regionals contested while advancing to seven NCAA Championships.

Along with his on-course responsibilities, Lais handles travel, recruiting and player development. Arkansas golfers have earned 16 All-American honors, 24 All-Region honors and 15 All-SEC honors during Lais’ 12 years. In his tenure, Arkansas has produced the seven lowest individual season scoring averages – including #1 Julian Perico and #2 William Buhl in 2019-20 – and 11 of the top 12 team season scoring averages.

Lais and McMakin went the rookie route in 2016-17, bringing in the No. 1 freshman class in the country and quickly saw the dividends on the course. The young squad captured two tournament titles and Mason Overstreet went on a run for the ages during postseason play in his inaugural year. Overstreet became the first rookie in Razorback history to finish even par at the SEC Championship and he followed that up with a sixth-place finish at the NCAA Baton Rouge Regional to qualify as an individual for the National Championship. Overstreet then posted rounds of 70-68-72-71 – 281 (-7) to finish as national runner-up and record the best Razorback finish at nationals in 54 years. He earned All-American honors and became the second player in school history to finish inside the top five at the National Championship, joining R.H. Sikes who won the program’s only National Title in 1963.

Three players from that aforementioned 2016-17 class (Overstreet, William Buhl and Luis Garza) – along with a 2018 transfer (Tyson Reeder) and 2019 freshman Julian Perico – won the 2019 SEC Championship, the program’s first conference title since 1995. Perico was named to the SEC All-Freshman team, Ping All-Region and advanced to the NCAA Championship.

The following year, COVID-19 shut down the season in mid-spring to force the cancellation of the SEC Championship, NCAA Regionals and NCAA Championships. The outstanding play was still rewarded as Buhl was named All-American and Perico claimed first team All-SEC and his second All-Central Region honor. However, in 2021, that core group, with two new additions, was SEC runner-up, NCAA Kingston Springs Regional runner-up and placed 11th at the NCAA Championship. The two new faces made strong contributions as Segundo Oliva Pinto was SEC Champion and Manuel Lozada was named to the SEC All-Freshman team. Perico repeated on the All-SEC and secured his third All-Region honor while Reeder added his first career All-Region honor.

Two players Lais help develop early in his career were four-time All-American Sebastian Cappelen and two-time All-American Taylor Moore. Cappelen, who earned his PGA card for the 2020 season, won the first professional event he ever qualified for – the 2014 Air Capital Classic on the then Web.com Tour, while Moore won his fifth start on PGA Tour Canada at the 2016 Staal Foundation Open and earned an exemption to make his debut on the PGA Tour the following week at the 2016 RBC Canadian Open.

Lais’ time as an assistant coach at Arkansas has not only paid dividends on the course but also in the classroom. Arkansas has had no less than four players on the SEC Spring Academic Honor Roll during each of the last 11 years (65 total honors) while also placing 22 student-athletes on the SEC First-Year Academic Honor Roll during that span. Cook and Overstreet were both named SEC Scholar-Athlete of the Year twice and both earned Academic All-America honors.

From 2008-10, Lais helped guide the Denver program to 11 top-five tournament finishes as well as an NCAA Regional appearance in 2009. He coached senior Espen Kofstad to the NCAA Championships as an individual, while Kofstad’s play also earned him PING All-Region honorable mention honors. Kofstad and Daniel Wax each earned Summit League All-Conference recognition and All-Region honors in 2009.

Along with his prowess as a recruiter, Lais also has a bachelor’s degree as a certified golfing machine authorized instructor and has instructed players on the PGA Tour, Web.com Tour and European Tour.

As a player for the Razorbacks, Lais participated in 15 tournaments over four years and 45 rounds, producing a 75.6 stroke average. He placed 11th at the Gopher Invitational in 2007 and had a career-low round of 68 at the Fighting Irish Gridiron Classic, also in 2007. As a senior in 2007-08 he played in a career-high six tournaments and 18 rounds with a 75.0 stroke average. He was named to the SEC Academic Honor Roll four times and was named to several University of Arkansas academic award lists. In addition to the time spent on the course and in the classroom, Lais also participated in the First Tee program and served as a golf camp instructor.

Lais is married to Jessica (LaMar), who also graduated from Arkansas. They are parents to Sawyer, Evelyn and the late Hudson LaMar. The Lais family is active with Make-A-Wish Mid-South and the family’s #StrongLIkeHudson Foundation makes it possible each year to make a child’s wish come true.