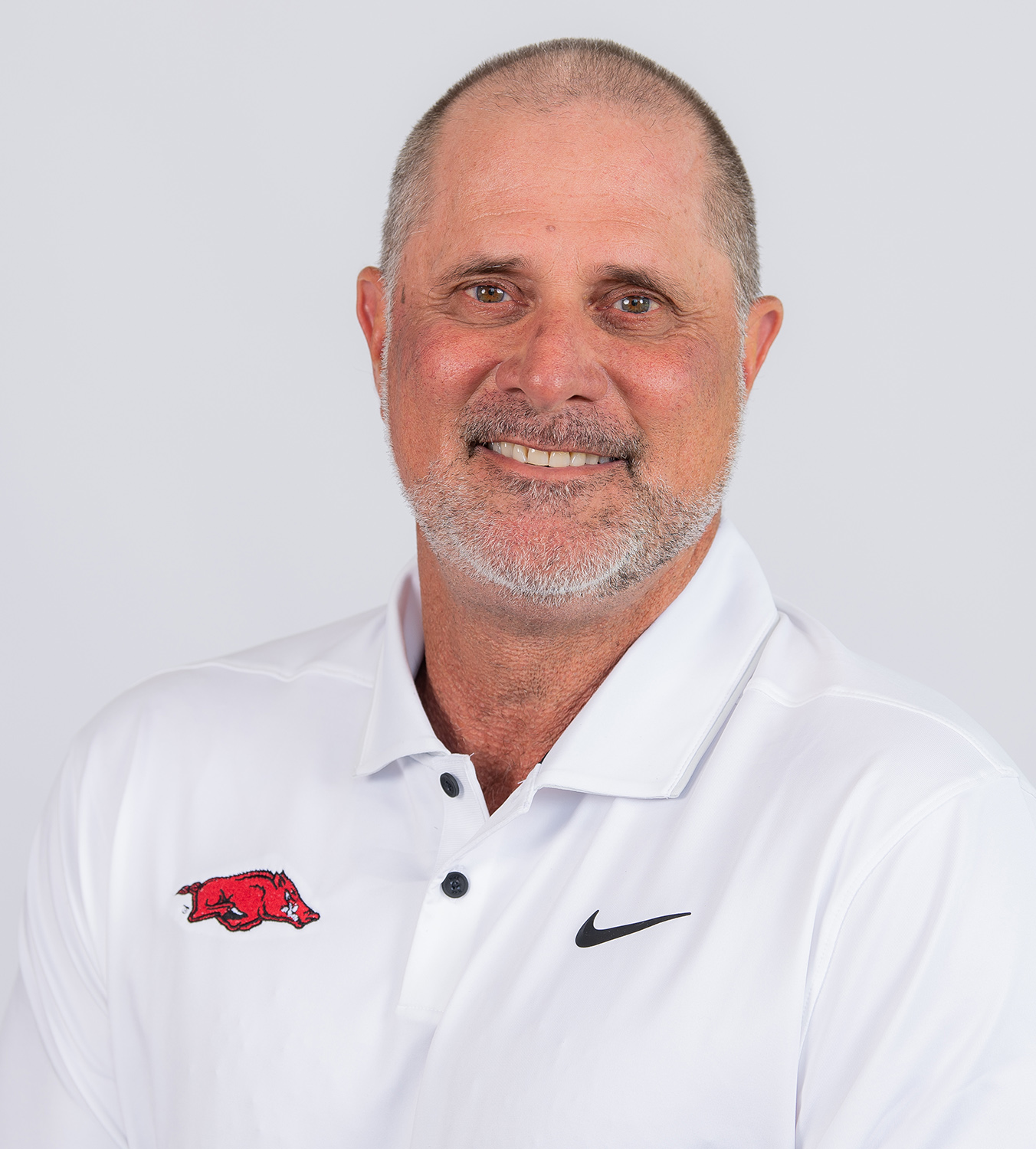 Head coach Brad McMakin has the Arkansas Razorbacks in a position to contend for a national title year-in and year-out by cultivating a team culture that has resulted in record-breaking performances on the course and in the classroom.

A highly successful coach prior to joining the Razorbacks, McMakin turned around the Arkansas program in just two years and took the team to new heights in the spring of 2009 when he led them to a runner-up finish at the NCAA Championships. In his 16 seasons as the head coach, McMakin’s teams have been to 14 NCAA Regionals (Note: 2020 NCAA postseason was canceled due to COVID-19) and eight NCAA Championships, while winning 30 team titles along the way, including the 2019 SEC Championship.

While his teams have shown an ability to rise to the best competition, it is McMakin’s ability to recruit and develop top-notch talent that makes him successful. Since his arrival, Arkansas has had 20 All-SEC selections, nine SEC All-Freshman selections, 21 All-American honors and 31 All-Region picks while five Razorbacks have played in seven Arnold Palmer Cups.

Arkansas’ success on the course is boosted by a foundation of success in the classroom. McMakin’s teams have combined to land 87 student-athletes on the Spring SEC Academic Honor Roll (3.0+ GPA) and 30 on the SEC First-Year Academic Honor Roll. On four occasions, two of his players were named SEC Scholar-Athlete of the Year including Austin Cook (2012 and 2103) and Mason Overstreet (2019 and 2020) – both of whom earned Academic All-America honors.

Transfer Mateo Fernandez de Oliveira flourished under McMakin. He was on the Fred Haskins Award Watch List and made the Arnold Palmer Cup while being named All-American (third team by Golfweek), All-Central Regional and All-SEC (second team). Fernandez de Oliveira also won his first collegiate title (Jackson T. Stephens Cup) and recorded his first three, top-5 finishes, placing third at the Carmel Cup and runner-up at the Blessings. He nearly matched his first two years of college golf totals from TCU in year three at Arkansas with six top 10’s, eight top 20’s, nine rounds in the 60’s and 22 rounds of par or better. (His previous two years’ totals were three, seven, seven and 28, respectively). He additionally won the South America Amateur, was runner-up at the Latin America Amateur and place ninth – two shots off the lead – at the NCAA Championship. Graduate transfer (and Fayetteville native) also won his first collegiate event – shooting 11-under at the Blessings Collegiate – while earning All-Region and All-SEC (second team). Segundo Oliva Pinto also earned All-Region.

McMakin brought in the No. 1 freshman class in the country for the 2016-17 season and quickly saw the dividends on the course. The young squad captured two tournament titles and Mason Overstreet went on a run for the ages during postseason play in his inaugural year. Overstreet became the first rookie in Razorback history to finish even par at the SEC Championship and he followed that up with a sixth-place finish at the NCAA Baton Rouge Regional to qualify as an individual for the National Championship. The Kingfisher, Oklahoma, native never backed down on the national stage, posting rounds of 70-68-72-71 – 281 (-7) to finish as national runner-up and record the best Razorback finish in 54 years. He earned All-American honors and became the second player in school history to finish inside the top five at the National Championship, joining R.H. Sikes who won the program’s only National Title in 1963.

Three players from that aforementioned 2016-17 class (Overstreet, Willam Buhl and Luis Garza) – along with 2018 transfer Tyson Reeder and 2019 freshman Julian Perico – won the 2019 SEC Championship, the program’s first conference title since 1995. Perico was named to the SEC All-Freshman team, Ping All-Region and advanced to the NCAA Championship.

The following year, COVID-19 shut down the season in mid-spring to force the cancellation of the SEC Championship, NCAA Regionals and NCAA Championships. The outstanding play was still rewarded as Buhl was named All-Ameican and second team All-SEC while and Perico claimed first team All-SEC and was tabbed All-Region for the second straight year.

However, in 2021, that core group, with two new additions, was SEC runner-up, NCAA Kingston Springs Regional runner-up and placed 11th at the NCAA Championship. The two new faces made strong contributions as Segundo Oliva Pinto was SEC Champion and Manuel Lozada was named to the SEC All-Freshman team. Perico repeated on the All-SEC, secured his third All-Region honor, was named honorable mention Al-America and represented Team International at the 2021 Arnold Palmer Cup. Reeder added his first career All-Region honor.

The current and future success of Arkansas golf was built, in part, by McMakin’s third team with the Razorbacks. Arkansas’ 2008-09 season was certainly one for the record books as it shocked some of the best programs in the nation on its way to NCAA runner-up honors. Finishing outside the top five in just one of 13 tournaments that season, the Razorbacks put together an impressive spring that featured five straight second-place finishes, which included the SEC, NCAA Regional and NCAA Championships. The Hogs defeated Washington (3 & 2) and Georgia (3-1-1) in match play, before eventually falling on the final hole of the championship match to Texas A&M to finish runner-up. Arkansas’ impressive spring earned McMakin SEC Coach of the Year honors, making him the first Razorback mentor to take the distinction.

The Razorbacks enjoyed one of their most successful seasons in school history in 2011-12 when McMakin led Arkansas to a school-record seven team victories in 10 regular-season tournaments. His squad also posted one of Arkansas’ best team stroke averages and had three players named All-SEC, two All-Region and a pair of All-Americans.

All-Americans Lingmerth and Landry, the tandem that paced Arkansas to the 2009 NCAA runner-up finish, as well as Cook have all won on the PGA Tour. Lingmeth additionally represented his native Sweden in the 2016 Olympics.

Lingmerth, who earned a second All-American honor in 2010, was the first Arkansas player to play in the prestigious Palmer Cup before earning his way on to the PGA Tour. Cappelen, a four-time All-American, played on the Palmer Cup three times and All-American Ortiz once.

Before his move to Fayetteville, McMakin was the head coach at Lamar University in Beaumont, Texas, where he spent a decade. In 2006, he led the Cardinals to a ninth-place finish at the NCAA Championships and won an NCAA-best seven tournaments in 13 events in 2006, placing two golfers among the top 10 individual finishers at the NCAA Championships.

After arriving at Lamar, McMakin revitalized the program, returning it to the top of the Southland Conference (SLC) and back onto the national scene. In his 10-year stint at Lamar, McMakin won four SLC titles, made six consecutive NCAA Central Regional appearances and, in 2006, earned Lamar its first trip to the NCAA Championships in 20 years. In McMakin’s final six seasons at Lamar, the Cardinals had three players earn All-America honors, three golfers capture SLC individual medalist honors, 21 All-Conference performers, an SLC Newcomer of the Year, three SLC Freshman of the Year winners and the conference’s only four-time Player of the Year.

A native of Beaumont, Texas, McMakin was named the Eaton/Golf Pride South Central Region Coach of the Year in 2006 after leading his squad to the NCAA Championships and a fifth-place showing at the NCAA Central Regional. The Cardinals captured their 20th Southland Conference championship and placed all five players on the all-conference team. McMakin was tabbed as the SLC Coach of the Year five times (1999, 2001, 2002, 2003, 2006) in his 10-year run at Lamar.

Prior to accepting the head coaching job at Lamar, McMakin spent four years as a professional golfer, competing on several mini tours as well as playing on the Nike and Hooters Tours.

Originally signing with Lamar out of high school, McMakin transferred to Oklahoma when former LU coach Greg Grost accepted the Oklahoma men’s golf job. It proved to be a wise move for McMakin as he would help the Sooners win a national championship during the 1989 season. McMakin, a co-captain of that squad, served in the same capacity the following year as Oklahoma finished fifth at the NCAA Championships.

McMakin was also a standout golfer on the Kelly High School golf team. He was a regular in the TCIL state tournament and earned medalist honors four times. While at Kelly, McMakin played for former Lamar coach Charles Rodemacher.

McMakin earned a bachelor’s degree in communications from Oklahoma in 1991. He and his wife, Tonia, have one son, Matthew.