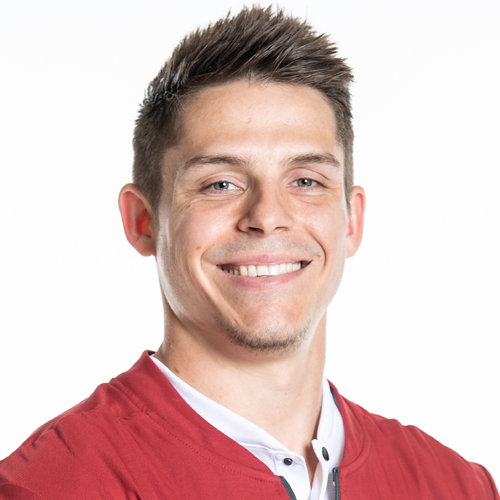 Chris Brooks was named an assistant coach of Arkansas Gymnastics by head coach Jordyn Wieber on Friday, May 17, 2019.

Brooks is the primary uneven bars coach at Arkansas and has taken the event to historic heights in the three seasons since. In 2022, Arkansas posted three of its top 10 highest bars scores in program history, including a new regional record of 49.450. At regionals, Brooks coached sixth-year Hog Sarah Shaffer to a 9.950 outing on bars, which earned her a berth to NCAA Championships, Arkansas’ second consecutive bars qualifier and fourth ever. At SEC Championships, Arkansas posted a 49.150, which matches the best in program history for the Hogs at the meet. guided Arkansas to five event scores of 49+, including one 49.500 and 49.550, which are the program’s third- and second-highest ever

In the regular season, Brooks guided Arkansas to five event scores of 49+, including marks of 49.500 and 49.550, which are the program’s third- and second-highest ever, The Gymbacks posted 14 9.9+ bar routines on the regular season, and Arkansas captured at least a share of three regular season bars titles and placed within the top three on bars in all but three meets. Along with Felicia Hano, Brooks was named a Regional Co-Assistant Coach of the Year by the Women’s Collegiate Gymnastics Association for his efforts in the 2022 slate.

In 2021, graduate transfer Maggie O’Hara made Arkansas history as the first Gymback to secure a spot as a regular season All-American on bars, closing out the regular season with an NQS of 9.925 on bars and ranked 11th in the nation to earn second-team All-America. After helping coach the Gymbacks to two record-breaking wins over Mizzou and Auburn, Brooks’ bars team scored a 49.375 at NCAA Regionals on day one, then the second-highest by the Hogs in postseason program history. During the regular season, Arkansas had three top-10 program scores on bars, ranking as high as No. 3 in the event by Road to Nationals.

Brooks spent the 2018 season as an assistant men’s gymnastics coach at the University of Oklahoma, and the 2017 season in a similar role for University of Nebraska women’s gymnastics. In 2016, Brooks made his Olympic debut in Rio after serving as an alternate on the 2012 London team and claiming first on the parallel bars and second in the all-around and on the high bar at the 2016 U.S. Olympic Team Trials.  Brooks was selected by his teammates to serve as the captain of the U.S. Men’s Olympic gymnastics team and placed 14th in the individual all-around competition in Rio de Janeiro.

He claimed the Winter Cup all-around title in 2010 and was a member of the World Championships team in 2010 and 2015. Before announcing his retirement in Aug. 2017, Brooks finished first on high bar at the 2017 Winter Cup. Brooks, a member of the Sooners’ squad from 2006-2009, won two national championships as a Student-Athlete at OU in 2006 and 2008, was a seven-time All-American (including three on high bar), a 2006 MPSF Conference high bar champion, and served as captain of the team as a senior in 2009.