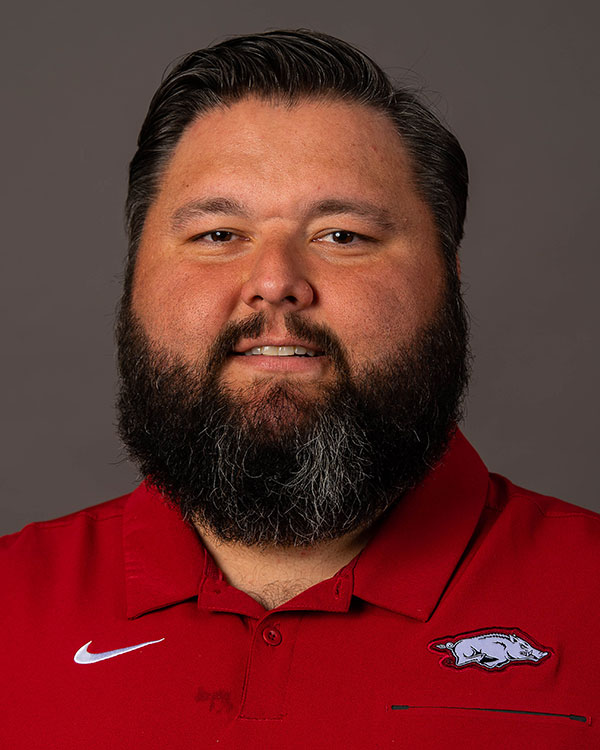 Cody Kennedy leads Arkansas’ offensive line after originally being hired to coach the Razorbacks’ tight ends following a brief stint at Southern Miss during the 2020 offseason as the team’s run game coordinator and offensive line coach.

Kennedy’s impact on the men up front was immediately noticeable as the Hogs turned into one of the most physical teams in the league and led the SEC in rushing – ranking seventh in all of FBS – with 227.8 yards per game in 2021. The offensive line helped pave the way for 2,961 yards rushing, the most by an Arkansas team since 2007 when Darren McFadden and Felix Jones helped set a school record with 3,725 yards rushing. The 2021 Razorbacks were an evenly distributed ground force with four different players rushing for over 500 yards, a feat that had not been accomplished at Arkansas since 1975. The Razorbacks’ rushing attack was led by QB KJ Jefferson, who ran for 664 yards. The offensive line also protected the quarterback better in 2021, allowing fewer sacks (30) than in 2020 (34) despite playing three more games.

Center Ricky Stromberg anchored the line, earning second-team All-SEC honors from the Associated Press and third-team accolades from Phil Steele and PFF. Beaux Limmer was named to PFF’s All-SEC Second Team and Phil Steel’s fourth team. Following the season Myron Cunningham participated in the East-West Shrine Bowl and NFLPA Bowl. Kennedy’s offensive line as a whole was also noticed as a semifinalist for the Joe Moore Award, given annually to the nation’s best offensive line.

He joined new Southern Miss head coach Will Hall in Hattiesburg after spending the 2019 and 2020 seasons working with Hall, then Tulane’s offensive coordinator, as the Green Wave’s offensive line coach. Kennedy helped Tulane establish one of nation’s premier rushing offenses, ranking inside the FBS top 20 in each of his two seasons in New Orleans.

In 2020, Tulane scored 32 touchdowns on the ground, tied for seventh-most in the nation, and ranked 17th nationally averaging 217.1 rushing yards per game, leading the American Athletic Conference in rushing for the second straight year. Kennedy helped guide Tulane to its second bowl berth in as many seasons, mentoring offensive linemen Corey Dublin and Sincere Haynesworth to All-AAC Second Team recognition.

Kennedy spent the 2018 season as a graduate assistant at Georgia, working under Arkansas Head Coach Sam Pittman who was the offensive line coach at UGA. The Bulldogs ran for 238.8 yards per game, the best mark in the SEC and 16th-best nationally, earning a top-10 ranking in the final AP Poll.

From 2016-17, Kennedy served his second stint at West Georgia as offensive line coach. The Wolves ranked inside Division II’s top 50 in total offense (418.2), rushing offense (182.8 ypg) and first down offense (283) and registered a 9-4 record. Four of his offensive linemen earned All-Gulf South Conference honors while center Harley Vaughan and tackle Austin Kastl were both named All-Americans.

As West Georgia’s offensive line coach in 2014, the Wolves went 12-4 and advanced to the NCAA quarterfinals. Kennedy oversaw a unit that paved the way for a league-leading 226.6 rushing yards per game (20th nationally) and 34 touchdowns (T-13th nationally).

Kennedy spent 2012-13 as a graduate assistant at West Alabama where he helped lead the Tigers to a pair of Gulf South Conference titles, a postseason appearance and a 17-7 record. The Tigers led the league (18th nationally) in rushing offense (225.1 yards/game) in 2012, and ranked 20th, nationally, in rushing offense in 2013.