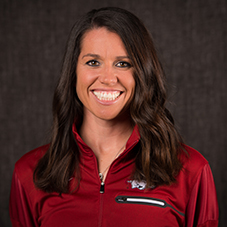 Courtney Deifel became the fourth head coach in program history when she was hired on June 11, 2015, and recently completed her seventh season at Arkansas in 2022. In seven seasons in Fayetteville, she has orchestrated the Razorbacks’ return to postseason play and guided the program to two SEC regular season championships, one SEC Tournament crown and five NCAA Tournament appearances, which includes five consecutive berths from 2017-22. The Hogs have qualified for the national tournament every year it has been held since 2017. Deifel led the program to its first NCAA Tournament Super Regional appearances in 2018, 2021 and 2022. Since her first season in 2016, the Razorbacks have been ranked 69 times in the NFCA Coaches’ Poll after previously being ranked only once in program history. Nine of the program’s 10 NFCA All-American awards and 78 Easton/NFCA All-America Scholar-Athlete accolades have been accumulated under Deifel since 2016. Sitting at 238 career wins at Arkansas, Deifel is seven wins away from becoming the program’s winningest head coach.

In 2022, Deifel guided the Razorbacks to their most successful season in school history, collecting back-to-back SEC regular season titles, headlined by the program’s first outright regular season crown, and the program’s first SEC Tournament championship after blanking Missouri, 4-0, in Gainesville, Fla., on May 13. Arkansas concluded the season with the most single-season wins in program history and a 48-11 record, marking a program-record .814 win percentage. Arkansas finished SEC play with a 19-5 record, producing the second consecutive 19-win conference season for the Hogs. Against Missouri State on March 3, Deifel became just the second head coach in program history to reach 200 career wins. The Hogs made their 11th NCAA Tournament appearance, earning the program’s highest overall seed (No. 4) and hosted their second straight Super Regional. The Razorbacks hosted the highest attended Regional and Super Regional in the NCAA in 2022. The Razorbacks tabbed an SEC-best 12 all-conference honors and a school-record five NFCA All-American nods to round out yet another enormous postseason awards haul. Arkansas became the first SEC program since 2006 to have four first team all-Americans. Danielle Gibson (first team) became the program’s first two-time NFCA All-American while KB Sides (first team), Linnie Malkin (first team), Hannah Gammill (first team) and Chenise Delce (second team) earned their first All-American honors. For the first time in program history, all eight NFCA All-Region nominees secured spots on All-South Region teams. Deifel was named SEC Coach of the Year for the second straight season while KB Sides became the program’s its first-ever SEC Player of the Year honor and Chenise Delce earned the Hogs’ second consecutive SEC Pitcher of the Year accolade after Mary Haff collected the award in 2021. Arkansas tabbed a league-best 12 all-conference honors and eight NFCA All-Region distinctions to round out an enormous postseason awards haul. The 2022 coaching staff was named the NFCA’s South Region Staff of the Year for the second straight season.

Deifel guided the Razorbacks to a 19-6 (1-2 SEC) record in the COVID-19 shortened 2020 campaign. In the only league series of the season, the Razorbacks earned a 1-0 conference-opening victory, their first road win over Alabama since 2000. Arkansas remained in the national polls throughout the year and climbed from a preseason No. 24 ranking to the No. 19 slot in the final release of the NFCA Coaches’ Poll. Junior catcher Kayla Green was honored with SEC Player of the Week recognition for the first time in her career and freshman pitcher Jenna Bloom emerged as one of the rising stars in the league, leading all freshmen in the nation striking out 10.9 hitters per seven innings.

Deifel led the Razorbacks to their third consecutive postseason appearance in 2019, earning an at-large bid to the Stillwater Regional. The Hogs finished the season 38-20 and 12-12 in SEC play. It marks the first time since 1999-00 that the Razorbacks finished the season .500 or better in conference play in back-to-back seasons. The Razorbacks garnered their highest in-season ranking during weeks one and two, coming in at 12th and 11th in the NFCA and ESPN polls respectively.

Arkansas saw two players named to the All-SEC teams, pitcher Autumn Storms was named second team and outfielder Hannah McEwen garnered first-team recognition. McEwen’s first-team selection was the first for Arkansas since 2012 and only the second in program history. In year four under Coach Deifel, the Razorbacks also earned two SEC Player of the Week awards, three SEC Pitcher of the Week awards, and one USA Softball Co-Player of the Week. A record five Razorbacks were named to the NFCA All-Region teams, with Storms garnering the first, first-team selection of her career. Storms went on to be named NFCA Second Team All-American as a pitcher, the first Razorback since 2010.

Year four with Coach Deifel and the Razorback staff saw growth in all aspects as the game, including a team .288 batting average, which ranks second-highest in program record book. In fact, four of the top seven team batting averages in program history come from the Deifel era.

In the 2018 campaign, Arkansas wrapped up the year with a 42-17 (12-12 SEC) record, the third most wins in program history; and the most victories since 2000. The team earned a national seed (13) in the NCAA Tournament for the first time in program history and went 3-0 defeating DePaul and Wichita State twice to earn the Fayetteville Regional Championship on its home field. The Hogs made their first ever NCAA Super Regional appearance but fell to eventual national semifinalist, Oklahoma, in Norman. Arkansas finished 17th in the final NCAA RPI report and the coaching staff earned 2018 NFCA Division I South Region Staff of the Year.

Just two seasons removed from a one-win conference tally, Deifel guided the Razorbacks to a 12-12 mark in SEC play. As the No. 7 seed at SEC Tournament, the program made its first semifinal appearance since 2001. The Razorbacks finished the season with a 27-2 record on their home field, establishing a new program record for home wins in a single season. Part of Arkansas’ home triumphs included the program’s first three-game sweep of a ranked team (No. 20 Mississippi State) and its first-ever series win over Alabama.

Deifel piloted the 2017 Razorbacks to a 31-24 record and the program’s first NCAA Tournament appearance since 2013. The Razorbacks improved their win total by 17 games from the previous season, marking the largest increase in the country among Power 5 programs. Arkansas also tallied seven wins in SEC play, equaling the combined total from the previous three seasons. In recognition of the team’s performance, Deifel was named the 2017 D1SoftballNews Coach of the Year.

From year one to two under Deifel, Arkansas’ pitching staff lowered its combined ERA by more than four runs (6.98 to 2.82) and added more than 20 points to its batting average (.260 to .284). The Razorbacks also led the SEC and tied for 17th in the NCAA with 59 home runs. During the year, Arkansas earned its first national ranking since 2013 when it was slotted at No. 24 in the March 7 release ESPN/USA Softball poll.

Deifel’s first win over a ranked team at Arkansas came during the 2016 season when the Razorbacks knocked off No. 23 Nebraska, 11-10, during the Easton Tournament in Fullerton, Calif.; the team added five ranked wins in 2017. The 2016 campaign also saw newcomer Ashley Diaz make an immediate impact as a member of the NFCA All-South Region Second Team and garnered NFCA National Freshman of the Year Top 25 Watch List recognition.

During her playing and coaching careers prior to coming to Arkansas, Deifel advanced to 11 NCAA Tournaments including a four-year run to the Women’s College World Series (WCWS) as an All-American catcher at California that was highlighted by winning the 2002 national title. The Bears also finished second (2003), fifth (2001) and seventh (2000) at the WCWS over her four-year run. Her postseason successes also featured a pair of Super Regionals as a graduate assistant at Oklahoma and five NCAA Regionals as an assistant at Maryland and Louisville.

As a first-year head coach, Deifel ushered in a culture of change for Maryland in 2015. Along with the program’s 16-game improvement from the previous season, the Terrapins’ offense show tremendous growth. Maryland finished 27th in the NCAA with 6.28 runs per game behind 339 runs scored, up more than 150 runs from 2014. Deifel also led her team to a .309 batting average, a 40-point jump from 2014 which also ranked 57th in the NCAA.

Prior to taking the head job at Maryland, Deifel spent four seasons as an assistant coach at Louisville in which she helped the Cardinals to four NCAA appearances, the 2014 American Athletic Conference Tournament title and an overall record of 176-60 (.746). Louisville averaged 44 wins in that time with a program-record 55 wins in 2012. Her student-athletes at Louisville racked up four NFCA All-America certificates and 29 all-conference selections.

She also spent two seasons as a graduate assistant at Oklahoma where she was a member of a staff the guided the 2008 Sooners to a 47-14 record and a Super Regional appearance.

As a player, Deifel was the starting catcher for California from 2000-03 and led the Golden Bears to four Women’s College World Series appearances including a national championship run in 2002 and national runner-up showing in 2003. She appeared in 285 games missing just three behind the plate over her four seasons. As a four-year starter behind the plate, she was a 2003 All-American, two-time All-Pac 10 selection and caught seven no-hitters. She is still the program’s career leader with 1,969 putouts.

Aside from her accomplishments in collegiate softball, Deifel had a successful professional career following her days at Cal. In 2004, she helped the NY/NJ Juggernaut to the National Professional Fastpitch (NPF) league title. Deifel also spent three years with LeoPalace21 in Japan that resulted in a runner-up showing and a pair of third-place finishes.

She graduated from California in 2003 with a bachelor of arts in American Business and Globalism and American Studies. Deifel earned her master’s of arts in Human Relations from Oklahoma in 2008.

Deifel and her husband Joe are the parents of two sons, Trip and Walt. The family resides in Fayetteville.