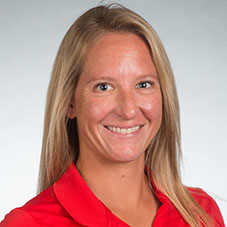 In her first season with the Razorbacks, Steinbock led the team to a 14-14 dual match record during the 2018-19 campaign and highlighted the spring with 4-3 defeat over ITA ranked No.9 Oklahoma State. The Hogs captured SEC victories over Missouri, Ole Miss, Mississippi State and Auburn and concluded the season beating Missouri in the first round of the SEC tournament before falling to 6th Seed Kentucky in the quarter-finals.

During Steinbock’s tenure, she coached the doubles duo of Tatum Rice and Lauren Alter to a career-high ITA ranking of No.8 in the country and an Elite 8 finish at The 2019 National Fall Championships in Newport Beach, CA. Steinbock has also guided multiple players on the roster to make appearances in the ITA top 125 singles rankings as well as leading four Razorbacks to compete at the prestigious 2019 All-American Championships in Tulsa, OK.

Steinbock lead the Razorbacks to a 7-4 overall record and 2-1 in SEC play during the shortened 2020 Season. The Razorbacks highlighted the short season with an early defeat over the No.24 ranked Ole Miss on Feb 28 and a No.49 team appearance in the ITA team rankings. The season was canceled by the SEC and NCAA on March 12 amid concerns over the COVID-19 virus.

One of the rising stars of collegiate tennis, Steinbock came to Fayetteville from the University of Houston, where she was head coach the last three seasons from 2015-18.

Steinbock led Houston to a 20-4 record in 2018, just the program’s seventh 20-win campaign in 41 years and coached two student-athletes to American Athletic Conference All-Conference Team honors. The Cougars went undefeated at home for the first time since 2006 at 14-0 and were ranked as high as No. 49 in the Intercollegiate Tennis Association rankings.

Prior to Houston, Steinbock spent two seasons at Oklahoma State from 2013-15, helping the Cowgirls compile an impressive 49-15 record during that span.

In 2015, Oklahoma State achieved one of the best seasons in program history. With Steinbock’s help, the Cowgirls finished the season 23-6 and hosted the opening two rounds of the NCAA Championship for the first time. Oklahoma State rose as high as No. 8, a program record, and advanced to the Sweet 16 for the first time since 1996. Following the season, Steinbock was named ITA Central Regional Coach of the Year and was a finalist for the National Assistant Coach of the Year award.

Steinbock also helped develop Viktoriya Lushkova into a two-time All-American in singles. With Steinbock’s leadership, Lushkova rose to No. 10 in the ITA singles rankings, an Oklahoma State record. In addition, Lushkova and teammate Kelsey Laurente were ranked as high as No. 3 in the ITA’s doubles listings, another school record.

Steinbock spent three seasons (2010-13) as an assistant at Mississippi State prior to her time at Oklahoma State. She helped the Bulldogs win their first SEC Tournament match in nearly a decade and played a major role in building a program that later advanced to the second round of the NCAA Championship in 2015.

Prior to her time in Starkville, Mississippi, Steinbock served two seasons (2008-10) as Wichita State’s associate head coach and helped the Shockers win the 2009 Missouri Valley Conference regular season and tournament championships. She earned MVC Assistant Coach of the Year honors after the season and helped the program make it back to the NCAA Championship in 2010.

A graduate of the University of Kansas, Steinbock also spent three seasons (2004-06) as a volunteer assistant at her alma mater and two seasons (2006-08) as an assistant at Washington State. During her tenure in the Pacific Northwest, the Cougars were ranked as high as No. 39 in the ITA national rankings and qualified for the 2008 NCAA Championship.

A native of Lubbock, Texas, Steinbock was a four-year letterwinner with the Jayhawks from 2000-04. She was named team MVP each of her last two seasons and earned First Team All-Big XII Conference honors as a junior.