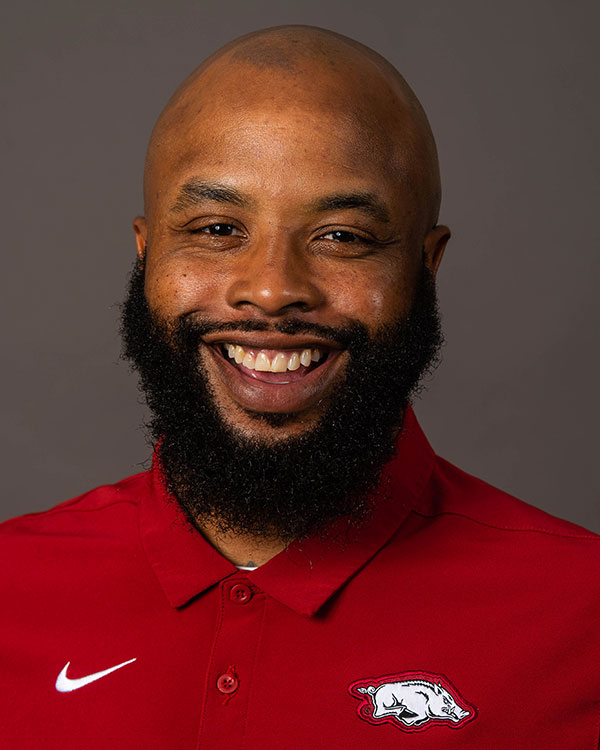 Head Coach Sam Pittman added Dominique Bowman to the Arkansas coaching staff prior to spring practice in 2022 to coach the Razorbacks’ cornerbacks.

Bowman joins the Hogs after spending the 2021 season at Marshall, where he helped the Thundering Herd’s pass defense rank 28th overall in the FBS and second in Conference USA allowing just 204.6 yards per game. In one year under Bowman, Marshall DBs Steven Gilmore and Micah Abraham both earned second-team All-Conference USA honors. Gilmore picked off a team-best three passes and broke up eight more while Abraham broke up a league-high 14 passes to rank fourth nationally.

Bowman brings a wealth of defensive knowledge to The Hill, having served as a defensive coordinator at Austin Peay and UT Martin. With Austin Peay in 2019-20 as the team’s co-defensive coordinator and secondary coach, Bowman helped lead the Governors to the 2019 Ohio Valley Conference title – the school’s first conference title since 1977 – and a pair of wins in the FCS Playoffs to reach the semifinals. Bowman’s secondary was tops in the OVC allowing just 203.5 yards per game with the Govs’ 15 interceptions also leading the league. His defense ranked among the best at the FCS level in defensive touchdowns (11th), total defense (12th), turnovers gained (13th), passing efficiency defense (14th), scoring defense (15th) and interceptions (16th).

His effort at Austin Peay earned him a spot with the prestigious American Football Coaches Association’s 2020 35 Under 35 Coaches Leadership Institute, a program aimed at identifying and developing premier, future leaders in the football coaching profession.

Prior to joining the Govs, Bowman worked at UT Martin during the 2017-18 seasons. After coordinating one of the best defenses in the FCS in 2017 he was promoted to assistant head coach for the Skyhawks. His 2017 defense ranked among the best in FCS, leading the country in red zone defense (60.6%). The Skyhawks finished fourth in scoring defense (14.3 ppg) and first downs allowed (168), sixth in total defense (273.8 ypg) and third down conversion percentage (28.7%), eighth in fourth down conversion percentage (28.6%) and team passing efficiency defense (104.3), ninth in passing yards allowed (159.9 ypg) and 20th in rushing defense (113.9 ypg) nationally.

Bowman is familiar with the Natural State having received his first college coaching job at Arkansas-Monticello in 2016 as the Boll Weevils defensive backs coach. The Weevils broke up 34 passes that year, including 11 interceptions. The Memphis native started his coaching career in the Memphis high school ranks. His final two years at the high school level were at Cordova High School – a suburb of Memphis – where he led one of the best defenses in the state of Tennessee.

Bowman played college football at NAIA level Lambuth University for Hugh Freeze. Bowman earned all-conference honors as a defensive back for the Eagles as a junior and senior. He graduated from Lambuth in 2008 with a bachelor’s degree.

He and his wife – Quay – have one daughter – Taylor.