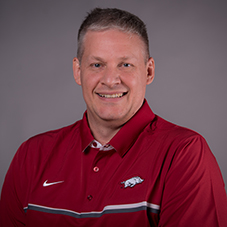 The 2021 slate marked his first postseason appearance at Arkansas, as the team accepted a bid to the National Invitational Volleyball Championship (NIVC), in which the Hogs finished in the quarterfinals. The team posted a 20-11 overall record, its first 20-win season since 2012 and the most regular season wins since 2018. The Hogs led the SEC in service aces with 1.61 per set, and came within the top five in kills, assists, and digs

Jillian Gillen and Courtney Jackson earned All-SEC and All-SEC Freshman Team honors and Gillen and Gracie Ryan landed on the AVCA All-South Region rosters, the second consecutive year in which Arkansas received spots on the lists. Gillen also received SEC Scholar-Athlete of the Year designation for the second time. Gracie Ryan continued to rewrite Arkansas records under Watson’s guidance and moved into 5th in program history for total assists with 2,913 so far and will return for a fifth year in 2023. Gillen became the 17th member of the Arkansas 1,000-kill club in 2021 and sits in fifth in Arkansas history in kills per set with 3.92.

In his fifth season as skipper in the 2020-21 split season, Watson led the Razorbacks to 14 conference wins, the most for Arkansas since 2003. He was honored with his first-ever SEC Coach of the Year award as Gillen was named SEC Scholar-Athlete of the Year and 2020 freshman Taylor Head was named SEC Freshman of the Year. Gillen and Head also earned a spot on the All-SEC team and All-SEC Freshman Team respectively and went on to earn AVCA All-South Region recognition as well. The Hogs averaged an impressive 1.58 service aces per set, good for second in the SEC and the fourth-best in program history. Arkansas’ maintained strong performances on both the offensive and defensive side of the ball, recording 14.57 digs and 12.95 kills per set this season.

In 2019, the Razorbacks were predicted to finish two spots higher in the SEC than where they finished in 2018 – one could contribute the improvement from the recognized incoming class that earned Highest Honorable Mention by PrepVolleyball.com. That freshman class went on to help Arkansas finish the 2019 season at 11-17, which included a three-match winning streak to close out the home slate, highlighted by five-set wins over Alabama and Ole Miss. Watson helped recruit and sign 2019 freshman Jillian Gillen, who led the league’s freshmen in kills per set (3.74) and ranked seventh among all players. Gillen racked up multiple awards, including two SEC Freshman of the Week awards, SEC All-Freshman Team honors and a spot on the 2019 VolleyballMag.com All-Freshman Team.

In his second season, Watson oversaw a 10-win improvement from the previous year with the Razorbacks finishing the 2017 campaign with a 19-11 overall record and 9-9 mark in SEC play. Arkansas’ 10 wins at Barnhill Arena marked the program’s highest home-win total since 2012. Arkansas also finished the year at No. 47 in the final RPI rankings.

Individually, senior Pilar Victoria led the NCAA with 5.47 kills per set and 6.08 points per set in 2017 and earned AVCA All-America Honorable Mention and All-SEC honors. Additionally, she and setter Rachel Rippee collected AVCA All-South Region Honorable Mention accolades. Away from the court, the Razorbacks combined to earn a second-consecutive AVCA Academic Team award.

The Razorbacks matched their SEC output from the previous season with a 7-11 mark in league play during Watson’s first year including six wins in their last nine matches of the year. Individually, senior Danielle Harbin emerged to finish third in the SEC with 4.22 kills per set on her way to AVCA All-South Region honors.

In eight years in Tempe, Ariz., Watson transformed ASU Volleyball from a perennial sub-.500 program into a postseason regular. In his last four seasons, the Sun Devils averaged more than 19 wins per season with four-consecutive bids to the NCAA Tournament. Watson also coached a pair of All-America performers, one in each of the past two seasons, for ASU’s first national honorees since 2000.

Arizona State began the 2015 campaign with a 15-0 record and reached as high as No. 5 in the AVCA Top 25 poll. The Sun Devils also opened conference play with their best start in the Pac-10/12 era with four wins including the program’s first win over Stanford in 15 years.

In 2014, ASU opened the season with six straight wins on the way to a 20-14 record. The Sun Devils were ranked in each AVCA regular season poll. Making its third straight trip to the NCAA Tournament, ASU defeated Texas A&M 3-1 to advance to the second round of the Tournament for the first time since 2006.

Watson led ASU to a 19-13 overall record in 2013 including a 3-0 upset of then-NCAA defending champion Texas. The Sun Devils started the season without dropping a set in their first seven matches. Making its second consecutive NCAA Tournament appearance, ASU dropped a five-set match to BYU in the first round.

In 2012, the Sun Devil squad opened with an 11-2 record, the best start since 1992. The Sun Devils finished with 20 wins — the most in a single season at ASU since 1993. The nine conference wins equaled the most since 2000. ASU made the program’s 16th appearance in the NCAA Tournament and Watson became just the fifth coach from ASU to guide the Sun Devils to a NCAA postseason berth.

Watson arrived as the head coach at ASU in 2008. In 2013, he was also named head coach of the sand volleyball team when the sport was added to the athletics program.

In June 2015, Watson was selected by USA Volleyball to serve as the head coach of the U.S. Collegiate National Team on a six-match tour of China.

In his three seasons at the helm of the BYU program, Watson compiled a 74-18 (.804) overall record while leading BYU to three-straight NCAA Tournament appearances. During his first season as head coach, Watson was named Mountain West Conference Coach of the Year after leading his team to a 25-4 record, the program’s best mark since 1998. In addition to leading BYU to the MWC regular-season title, Watson also helped lead the Cougars back to the NCAA Tournament.

In 2007, he led the Cougars to a 24-8 overall record and an Elite 8 finish in the NCAA Regional Final. His team also finished the year ranked 12th nationally, and at one point through the season, the Cougars held a rank as high as ninth in the country. No stranger to the best competition, Watson’s teams have been ranked as high as eighth on RPI, showing the character and strength of the teams he builds. Never backing down from challenges are also another hallmark trait of Watson-led teams.

Prior to his head-coaching debut, Watson had amassed 11 years as an assistant coach at four universities. After an All-American playing career at BYU, Watson coached for two years under his former coach, Carl McGown, before beginning his career in women’s volleyball with extremely successful stints at Kansas State, Arkansas State, and Montana State.

Watson had an All-American playing career at BYU from 1990-1994, where he was a four-year starter and two-time captain. He graduated from BYU in 1995 with a degree in physical education and sports business management after leaving his native home of Homebush, Australia.

He and his wife, Larissa, have two sons and a daughter.