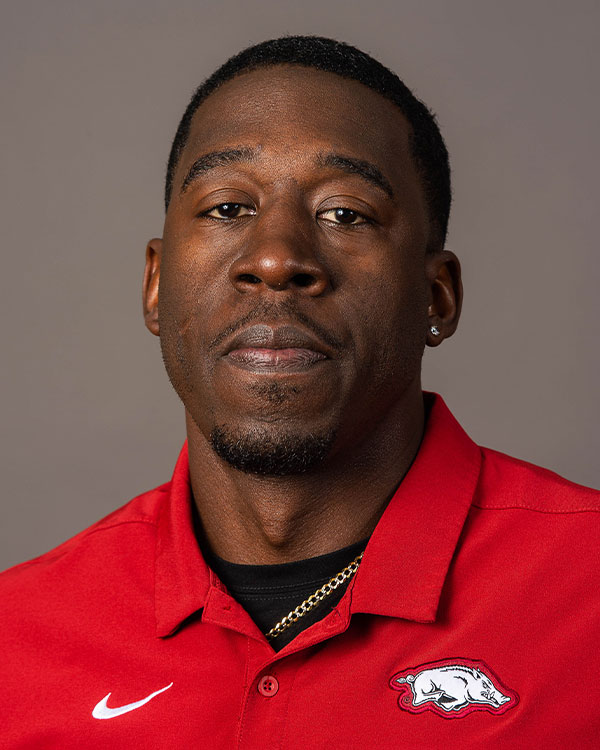 Jimmy Smith is in his third season leading the running backs for the Razorbacks.

Smith’s running backs produced an impressive 2021 season leading the way for Arkansas to lead the Power 5 and rank second nationally with 227.8 rushing yards per game – the most by an Arkansas team since 2007 when legendary running backs Darren McFadden and Felix Jones helped the Hogs set a school record. The Hogs’ rushing attack, while steady, was explosive in 2021. Arkansas’ 113 runs of 10+ yards led all teams in the Power 5 after producing 50 such runs in 2020.

Three of Smith’s running backs – Trelon Smith, Raheim Sanders and Dominique Johnson – joined quarterback KJ Jefferson to all rush for over 500 yards, a feat that had not been accomplished at Arkansas since 1975. Trelon Smith led the running backs with 598 yards and five TDs in his second season on the field for the Hogs. Smith’s role in developing Sanders was key for Arkansas in 2021. Sanders was recruited as a wide receiver before moving to running back during spring practice and growing his role throughout the season, eventually rushing for 578 yards and five scores en route to being named to the SEC’s All-Freshman team by the league’s coaches. Sanders finished second on the team with 706 total yards, adding 109 yards receiving and 19 yards on kick returns. Johnson was another success story for Smith, after moving to tight end for a day during fall camp Johnson moved back to running back and excelled, starting six games and running for 575 yards and a team-high seven touchdowns.

Smith oversaw a rushing offense that produced 151.3 rushing yards per game in 2020 against an SEC-only schedule in his first year in Fayetteville. Trelon Smith emerged as the team’s feature back, producing a team-high 710 rushing yards while ranking seventh in the SEC averaging 5.3 yards per carry. Smith ran for 172 yards and three touchdowns against Missouri, becoming the first Razorback ball carrier to reach those marks since 2016.

Smith was a part of the Georgia State’s historic upset at Tennessee when the Panthers outrushed the Volunteers, 213-93, to win, 38-30, on opening weekend in the Panthers’ first-ever win over a Power 5 program.

Prior to jumping to college football, Smith coached for 12 years at Cedar Grove High School in Metro Atlanta, including his last six years as athletic director, head football coach and head track coach.

Smith arrived at Cedar Grove in 2007 as an assistant football coach, working with receivers and defensive backs before being elevated to offensive coordinator in 2010 for three seasons before taking over as head coach in 2013.

He coached six prep All-Americans, and more than 30 of his former student-athletes went on to play at the collegiate level.

As the head track coach, Smith led Cedar Grove to four consecutive state titles (2015-18), also the first state titles in school history. He was honored as the 2018 Region 5-AAA Athletic Director of the Year.

He began his coaching career at Darlington (S.C.) High School, his alma mater, where he was the offensive coordinator and quarterbacks coach for one season in 2005.

Smith was a quarterback at Tennessee State, helping the Tigers to back-to-back Ohio Valley Conference championships in 1998 and 1999.

He earned his bachelor’s degree in business administration from Fayetteville State in 2002 and added a master’s of education from Georgia State in 2009.

Smith, a native of Darlington, S.C., and his wife Quanisha have a son, Jermaine II, and a daughter, Joss.