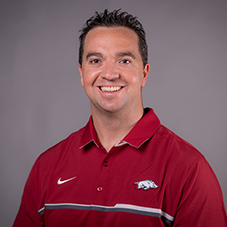 Jon Newman-Gonchar joined the Razorbacks as the program’s associate head coach on January 28, 2016, and came to Fayetteville having spent the previous three seasons at Iowa State where he helped lead the Cyclones to three NCAA Tournament appearances as the program’s assistant coach and recruiting coordinator.

“Jon brings an enormous amount of experience to our program,” head coach Jason Watson says of Newman-Gonchar. “He is well respected and liked within the volleyball community. His time working with some of the best coaches in the college game, at Iowa State and LMU, enhance our abilities to better serve our student-athletes at Arkansas.”

Entering his second season at Arkansas, Newman-Gonchar added to his international resume as an assistant coach with the U.S. Women’s National Team which earned a top-five finish at the 2017 FIVB Grand Prix and turned in a gold-medal performance at the 2017 Pan Am Cup in Peru. Additionally, Newman-Gonchar serves as the Chair of the AVCA 30 Under 30 Award selection committee, an honor he received in 2010.

During Newman-Gonchar’s three-season tenure in Ames, Iowa State posted a 56-31 overall record with a 32-16 mark in Big 12 play. In that time, Iowa State also tallied five wins over top-25 opponents. The Cyclones registered a conference finish as high as second place in 2014. In the past two postseason bids, Newman-Gonchar helped Iowa State reach the second round of the NCAA Tournament.

Individually, Newman-Gonchar coached his student-athletes to four AVCA All-America certificates, six AVCA All-Region honors and 18 All-Big 12 selections including a trio of Big 12 Libero of the Year honors and the 2015 Big 12 Freshman of the Year. In this three seasons at Iowa State, he worked directly with the team’s setters and middle blockers.

Prior to his time at Iowa State, Newman-Gonchar spent three seasons as an assistant coach at Loyola Marymount. He was part of the staff that guided the Lions to the NCAA Tournament in 2012 for the program’s first postseason appearance since the 2005 campaign. He was also the Lions’ recruiting coordinator which resulted in a pair of Highest Honorable Mention accolades in the PrepVolleyball class rankings.

Newman-Gonchar spent the 2007-09 seasons at UC San Diego where the Tritons racked up an impressive 70-18 overall record with three-consecutive trips to the NCAA Division II Tournament. In recognition of his work with UCSD, Newman-Gonchar was named to the 2010 AVCA Thirty Under 30 Awards list, which recognizes the top up-and-coming volleyball coaches under the age of 30 years old. He also served as an assistant coach for the UC San Diego men’s volleyball program which earned a top-10 national ranking in 2009.

Additional past collegiate experience includes serving as an assistant coach at Louisiana-Lafayette in 2006 after spending a season with the Thompson Rivers University men’s volleyball team in British Columbia. He also served as a volunteer assistant coach at Northern Arizona.

Newman-Gonchar also brings international coaching experience to Fayetteville, having most recently served as an assistant coach for the 2015 U.S. Women’s National Team that won gold at the XIV Pan American Cup in Lima, Peru. He first worked at the national level in 2007 as a coach at the HP A1 Select Camp and staff member for the USA High Performance tryout. He also worked with the USA Junior National Team in 2008 and 2009 at the Olympic Training Center in Chula Vista, Calif.

A native of Claremont, Calif., Newman-Gonchar earned his bachelor’s degree in health sciences in December 2005 from Northern Arizona where he was also a member of the men’s club volleyball team.