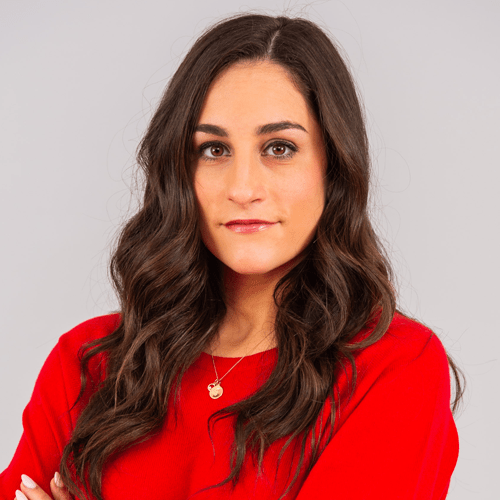 Olympic gold medalist Jordyn Wieber was introduced as the head coach of the Arkansas Women’s Gymnastics program on Wednesday, April 24, 2019, by Vice Chancellor and Director of Athletics Hunter Yurachek.

During her third season in 2022, Wieber guided the Gymbacks to their 18th consecutive regional appearance and second straight regional final. The team set a new regional bars record (49.450) and a new regional floor record (49.400). The Hogs finished the year ranked 16th in the country, maintaining the program’s 17-year streak in the top 20. All-arounder Kennedy Hambrick and bars specialist Sarah Shaffer both earned individual NCAA Championships berths, extending Wieber’s unblemished national appearance streak in each eligible year. Hambrick earned her fifth All-American honor at the event and became the first-ever Gymback to compete at NCAAs as an individual all-arounder in consecutive years. Arkansas’196.450 at SEC Championships in 2022 is the third-best in program history and the best finish since Wieber took the program helm.

At SEC Championships, Arkansas finished with their best score in Wieber’s tenure, 196.450, and coached Kennedy Hambrick and Sarah Shaffer to All-SEC honors and Kalyxta Gamiao and Leah Smith to SEC All-Freshman Team honors, the most Gymbacks on the SEC postseason lists since 2018.

Wieber brought her London 2012 and UCLA teammate Kyla Ross on to the staff for the 2022 season, whose beam coaching helped Arkansas reach a new program high of 49.250 on the event. The Gymbacks also set a new program record on vault of 49.500 and posted three of its best 10 bars scores ever.

Wieber helped bring a long-awaited dream for the Arkansas program to light in 2022 as the team hosted its first-ever meet in Bud Walton Arena. It was attended by 10,345 fans, a new program single meet record, and the second time in the Wieber era that a new record has been set. The team also set new program highs in total attendance (24,830), which ranked seventh-best in the country, and in season tickets with 1,711. Each year since Wieber’s arrival, the Gymbacks have ranked in the top 10 in average attendance.

Wieber has coached three regular-season All-Americans in Sophia Carter (2020), Maggie O’Hara (2021) and Kennedy Hambrick (2020, 2021). The Razorbacks set an all-time team score in 2021 (197.425) and Hambrick became the new all-around score record holder (39.750). Under her guidance in and out of the gym, Arkansas saw its first SEC Scholar-Athlete of the Year in 10 years in 2022 with Bailey Lovett, and the team has set a new streak of three consecutive years with a team GPA of 3.5 or above.

The Gymbacks earned their first-ever spot in the SEC night session in 2021 and advanced to the NCAA regional final after scoring a post-season program best 197.250 on day one. In total, Arkansas registered fives scores of 197.000 or better in 2021 for the first time in program history. In 2020, the Gymbacks ranked as high as fourth in the nation on floor and finished the season ninth in the nation. It was against No. 13 Kentucky on Jan. 24 that Arkansas scored a 49.525 on the floor, the second-highest event total in program history.

Headed into 2022, Arkansas held onto the third-longest active streak for meets with a score of 49.000 or higher, coming in with 32 straight meets, behind Alabama (33) and Florida (35). During the 2022 slate, the Gymbacks extended that streak to 39 meets. In Wieber’s first year, Arkansas scored a 49.00 or higher in 14 of 16 events over the course of four home meets, nearly 90 percent of all events. The Razorbacks’ success on the floor helped them lock in back-to-back SEC wins against No. 20 Missouri and No. 10 Georgia mid-way through the season. The consecutive wins marked the first time since 2017 that Arkansas won two-straight conference meets and consecutive meets against a ranked opponent.

Arkansas saw six Gymbacks wrap up the 2020 season ranked in the top 100 by Road to Nationals in at least one event, with four Hogs finishing with multiple top 100 rankings. With Wieber’s lead, Arkansas won 27 event titles through 10 meets. Hambrick finished the season with the most individual titles among the Gymbacks, securing 11 event titles including a team-high four all-around titles.

The first home meet of the Wieber era was held on Jan. 17 against No. 3 Denver, bringing a then-record crowd of 6,714 fans to Barnhill Arena. On Feb. 21, Coach Wieber and her Arkansas squad hosted Auburn for a Women’s Empowerment Meet, the first of its kind in NCAA gymnastics and now an annual tradition for the Gymbacks.

Wieber wrapped up her third season as a volunteer assistant coach at UCLA and her sixth with the program in 2019, assisting the team in a variety of roles during her first three years in Westwood following her Olympic career. Wieber coached the Bruins on floor exercise, an event in which UCLA finished the 2018 and 2019 regular seasons ranked No. 1 in the nation. In 2019, the Bruins recorded scores of 49.5 or better in 11 of 14 meets, averaging a national-best 49.604 on floor. UCLA hit a season-high 49.825 on March 16, which ranks No. 3 all-time in school history, behind five scores of 9.925 or better in that meet, including two perfect 10s. The floor squad also posted marks of 49.775 (March 23) and 49.750 (Feb. 16) over the course of the year, as four Bruins earned regular season All-America honors in the event – Katelyn Ohashi, Kyla Ross, Gracie Kramer and Felicia Hano. At the NCAA Championships on April 19-20, Wieber coached Ross to the individual floor title with a score of 9.950, the program’s second in as many years after Ohashi took home the crown in 2018. After winning their semifinal session with a 197.650 (49.6125 in the floor), UCLA finished third overall in the finals.

The 2018 Bruins scored 49.4 or higher in 11 meets and 49.6 or higher in three meets, including a national season-high of 49.775 set Feb. 25. She and her fellow UCLA coaches were named the 2018 West Region Assistant Coaches of the Year, as they helped lead the Bruins to Pac-12, NCAA regional and NCAA national titles.

Wieber, who has been a vocal advocate for safe sport, has won many awards in the past several years, including the Arthur Ashe Courage Award at the ESPYs, the Rising Star Award by the Los Angeles Business Journal, and the Giant Steps A Hero Among Us Award.