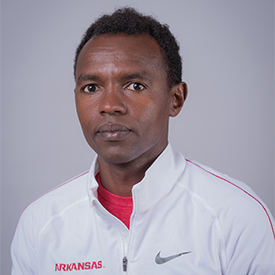 Razorback distance harrier Josphat Boit is in his fifth season as a volunteer assistant coach with the Arkansas distance crew.

A two-time NCAA Champion while running for the Hogs, Boit claimed the 2006 NCAA Indoor 5,000m title and then won the 2006 NCAA Outdoor 10,000m race. In addition to his national titles, Boit also finished third in the Indoor 3,000m and second in the Outdoor 5,000m that season.

As a Razorback, Boit earned eight All-America honors, collected six SEC titles and was a 10-time All-SEC performer. He remains the second fastest 8K cross country performer in Arkansas history from his performance of 22 minutes 59.10 seconds during the 2005 SEC Championships and is one of only three Razorbacks to win consecutive SEC individual titles (2004-05).

Boit also holds the second fastest 10K on Arkansas’ all-time bests list with a 28:07.27 from 2005. Following his time with the Razorbacks, Boit began competing on the professional circuit, setting a new PR in the 10K of 27:40.44 in Palo Alto, California.

In 2014, Boit finished 21st and was the top American in the IAAF World Half Marathon Championship, recording a career best time of 1:01:33 over the 13.1-mile course in Copenhagen, Denmark. The time ranked Boit No. 20 on the U.S. all-time list.

Boit placed third in the 2014 US Half Marathon Championships, held in Houston, posting a then career best of 1:01:41. The season also included a 10th-place finish in the Boston Marathon with a 2:12:52 clocking.

Boit received his bachelor’s degree in criminal justice in May 2006. He lives and trains in Fayetteville, and married the former Shenan Moiseichik on May 22, 2008.