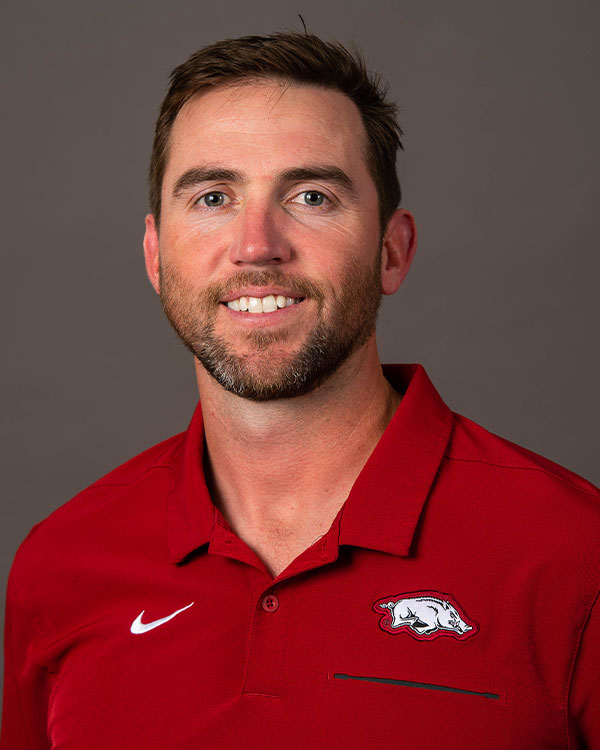 Kendal Briles, one of the brightest offensive minds in college football, guides the Razorbacks’ offense for the third straight season as the team’s offensive coordinator and quarterbacks coach.

The turnaround of Arkansas’ offensive production in Briles’ first two seasons on The Hill is nothing short of amazing. Briles inherited a team that averaged 21.4 points per game and gained 340.1 yards per game in 2019 prior to his arrival but in 2021 the Hogs scored 30.9 points per game – the most since 2015 – and racked up 441.7 yards per game – the most since 2015. His impact in both the running game and passing game has been noticeable. Arkansas led all Power 5 teams and ranked second in the FBS with 227.8 rushing yards per game, the most since the Razorbacks set a school record in 2007 powered by legends Darren McFadden and Felix Jones. The Hogs eclipsed 300 yards rushing three times in 2021, including a season-best 353 yards in the win over Penn State in the Outback Bowl. Arkansas’ rushing attack was a four-headed monster led by QB KJ Jefferson, who ran for a team-high 664 yards. Jefferson was one of four Hogs (Trelon Smith – 598 yards, Raheim Sanders – 578, Dominique Johnson – 575) to rush for over 500 yards in 2021, a feat that had not been accomplished at Arkansas since 1975. The Hogs’ run game was more than just effective, it was explosive with 113 runs of 10+ yards to rank second nationally.

Briles’ impact on the passing game in noticeable in the Razorback record book. For the second straight year an Arkansas quarterback coached by Briles has etched his name into the record book for accuracy in a single season. In 2020, Feleipe Franks set a school record completing 68.5% of his passes and in 2021, Jefferson followed by completing 67.3% of his passes to rank second in Arkansas history. Jefferson was spectacular in 2021, passing for 2,676 yards with 21 TDs and just four interceptions while leading the team in rushing, including a season-best 110 yards on his way to MVP honors in the Outback Bowl. Jefferson’s primary target, First-Team All-SEC and Second-Team All-American WR Treylon Burks, also put his name in the program’s record book. Burks caught 66 passes for 1,104 yards and 11 TDs, averaging 92.0 yards per game to rank third in the SEC. Burks’ 1,104 yards ranks third in a single season at Arkansas and his 11 touchdowns matched Marcus Monk for second-most in a single season by a Razorback. Burks also set the school record for 100-yard receiving games in a single season with six and ranks second all-time with 10.

Running back Trelon Smith and wide receiver Treylon Burks broke out during the 2020 season, thriving in Briles’ explosive offense. Arkansas averaged 391.5 total yards of offense per game, more than a 50-yard increase from the previous year.

Smith led the Hogs with 710 rushing yards (10th in SEC) and five touchdowns, turning in a career-best effort at Missouri with 172 yards on the ground and three touchdowns. Burks, meanwhile, ranked fifth in the SEC and 22nd nationally with 820 receiving yards, the most by a Razorback receiver since 2015. Burks led Arkansas with seven touchdown receptions and ranked third in the SEC in receiving yards per game (91.1). QB Feleipe Franks set the school record for completion percentage in his only season on the Hill, completing 68.5% of his passes. Franks passed for 2107 yards and 17 touchdowns, including the first four-touchdown game of his career at Auburn to make him the first Razorback since 2015 with four TD passes in a game. Franks was steady all season for the Hogs, throwing at least one touchdown pass in eight of the nine games he played in and multiple TDs in five games. He also passed for at least 200 yards in eight games and eclipsed the 300-yard mark twice, including a career-high 339 yards against LSU.

Briles owns a wealth of knowledge and a track record of success as a play caller throughout his coaching career. The 2015 Broyles Award finalist led offenses at each of his four coaching stops – Florida State, Houston, Florida Atlantic and Baylor. Since taking over play-calling duties prior to the Cotton Bowl at the end of the 2014 season, when his Baylor offense set an NCAA bowl record with 601 passing yards against Michigan State, Briles’ offenses have averaged 39.5 points per game.

Briles called one of the most explosive offenses in the nation in 2018 at Houston, ranking in the top 10 in both total offense (7th – 512.5 ypg) and points per game (5th – 43.9 ppg). The Cougars were one of just three teams to rank in the top 25 nationally in passing and rushing, averaging 295.5 yards (16th in FBS) through the air and 216.8 yards (24th) on the ground. Houston’s offense was explosive, scoring at least 30 points in each of the first 12 games of the season, including a NCAA-leading 10 games of at least 40 points. The offense put points on the board in 47 of 52 quarters and opened the year with a program-best eight straight games of 40-plus points. The Cougars had 42 scoring drives of less than two minutes and ranked fifth in the country with 92 plays of 20-plus yards with the offense’s 44 plays of at least 30 yards ranking seventh in the nation.

Junior quarterback D’Eriq King flourished under Briles’ direction, putting together one of the best seasons in the nation in 2018. King, who was injured in the team’s 11th game, needed only 10 games to break the American Athletic Conference’s single-season touchdown responsibility record with 50. His average of 27.5 points responsible for per game led the nation and was four points higher than the next-closest competitor, Heisman Trophy finalist Dwayne Haskins. King also led the AAC in total offense, passing touchdowns, passing efficiency and completion percentage. His 36 passing touchdowns ranked sixth in the nation, while his pass efficiency rating of 167.0 and his 332.4 yards of total offense per game ranked seventh. King, who was a semifinalist for the Maxwell Award and Davey O’Brien Award, had at least two passing touchdowns and one rushing score in all 10 games he finished in 2018, the longest streak by an FBS player in more than 20 years, and against USF became only the 13th player in FBS history to pass for 400 yards and rush for 100 yards in the same game.

Briles coordinated the offense at FAU in 2017 helping the Owls to the sixth-best rushing attack in the FBS with 285.3 yards per game. The same offense ranked eighth nationally with 40.6 points per game and ninth in total offense with 498.4 yards per game. The Owls’ offense helped lead the program to its first Conference USA championship and an 11-3 record, including a win in the Boca Raton Bowl. RB Devin Singletary became FAU’s first Associated Press All-American and was named C-USA MVP after leading the nation with 32 rushing touchdowns. He rushed for 1,920 yards before being picked in the third round of the NFL Draft by the Chicago Bears.

Briles spent the first nine years of his coaching career at Baylor helping the Bears to unprecedented success, including back-to-back Big 12 titles. He served in numerous roles for the Bears as the inside wide receivers coach, passing game coordinator and recruiting coordinator before taking over as the offensive coordinator and quarterbacks coach for his final two seasons in Waco. His recruiting efforts were recognized in 2013 and 2014 as the Big 12’s Recruiter of the Year.

He was a Broyles Award finalist in 2015 after leading Baylor’s offense to historic numbers, leading the NCAA with 48.1 points per game and 616.2 yards of total offense – the third-highest average in a single season in NCAA history. OL Spencer Drago was a consensus All-American and WR Corey Coleman won the Biletnikoff Award leading nine Bears on the All-Big 12 teams. Briles and Baylor ended that season with a win over No. 10 North Carolina in the Russell Athletic Bowl racking up a NCAA bowl-record 645 rushing yards and a bowl record 756 yards of total offense. His 2016 offense led the Big 12 in rushing with 241.2 yards per game. Baylor’s 2013 offense produced the second-highest total offense season average in NCAA history with 618.8 yards per game.

During his seven years as the Bears’ wide receivers coach, he tutored four All-Americans and five eventual NFL receivers, including Terrance Williams and Kendall Wright. Williams, who was a third-round pick by the Dallas Cowboys in the 2013 NFL Draft, broke the Baylor single-season receiving record and led the nation with 1,832 yards on his way to being only the sixth unanimous All-American in program history. Wright, the 20th overall selection in the 2012 NFL Draft, was an All-American in 2011 and broke every major school receiving record.

He was an outstanding high school quarterback in Texas, earning Texas 4A Offensive Player of the Year in each of his final two seasons after generating 9,322 yards of total offense and accounting for 98 touchdowns. He began his collegiate playing career at Texas, where he redshirted in 2001 before playing seven games at safety and intercepting two passes in 2002. He then transferred to Houston and moved to wide receiver, catching 70 passes for 680 yards and a score. He earned his bachelor’s degree in sport management from Houston in 2005 and was inducted into the Texas High School Football Hall of Fame in 2014.

Briles and his wife Sarah have three children: sons, Jaytn and Kru, and daughter, Kinley.