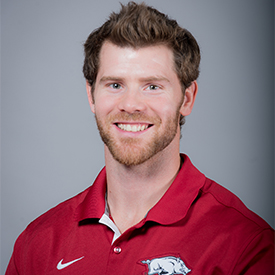 Mat Clark enters his 10th season as the strength and conditioning coach for Arkansas men’s track and field and cross country teams.

During the 2021 outdoor season, assisted with coaching multi-event athletes during the SEC Championships, NCAA Championships and Olympic Trials.

2017 marked the initial year Clark took over responsibilities of strength and conditioning for the Razorback women’s track and field and cross country programs as well.

A 2009 graduate of the University of Northern Iowa, Clark excelled as one of the top decathletes for the Panthers. He earned three All-America honors and qualified for the 2008 Olympic Trials under the guidance of former Razorback assistant coach Travis Geopfert.

Since joining the Razorbacks in 2011, Clark has been instrumental in the development of multiple NCAA and SEC champions. Over 150 Razorbacks have reached All-America status as a direct result from Clark’s training.

In 2016, several Clark trained athletes between current and former Razorbacks, which included Jarrion Lawson, Omar McLeod and Clive Pullen, had national success during the Olympic Trials for the United States and Jamaica.

The accomplishments carried over to the Olympic Games in Rio de Janeiro, Brazil, where McLeod became the first Jamaican to win Olympic gold in the 110m hurdles.