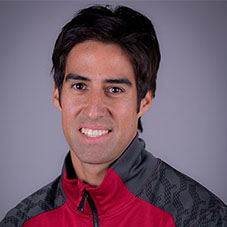 Nestor Briceno was named an assistant coach for Arkansas men’s tennis on Aug. 9, 2013. Briceno joined Andy Jackson for the second time in his career, reconnecting with the same head coach from his undergraduate years at the University of Florida.

In 2016, Briceno helped lead the Razorbacks on a renaissance, with the team reaching 20 wins for the first time since 1986 and a program-best 7-5 record in SEC play. With the team holding a 10-2 record, Arkansas made its first real statement of the season at No. 10 Oklahoma, defeating the Sooners 5-2 in Norman on Feb. 28. The victory vaulted the Razorbacks from No. 51 to No. 27 in the nation and made ripples across the collegiate tennis landscape.

Following a 5-2 win at Vanderbilt on April 8, Arkansas stood at 19-5 (7-3 SEC) and moved up to No. 12 in the Oracle/ITA Rankings, the highest standing of the year and the team’s best since 2006. The Razorbacks’ 7-5 conference record tied for fourth in the regular season standings and their 19-8 overall mark clinched a berth in the NCAA Tournament for the first time since 2006.

Arkansas earned a spot as the No. 2 seed in the Oklahoma State Regional in Stillwater and faced Wichita State in the first round. The Razorbacks downed the Shockers 4-2, but were defeated in the second round by the host Cowboys by a score of 4-0. The team finished with a 20-9 (7-5 SEC) mark with a final Oracle/ITA mark of No. 20. For helping lead the team’s performance over the course of the 2016 season, Briceno was named ITA Central Region Assistant Coach of the Year.

Following the conclusion of team competition, Arkansas earned bids in the singles and doubles NCAA Championships as well. Mike Redlicki, who finished No. 25 in the Oracle/ITA Rankings, fell to TCU’s No. 5 Cameron Norrie in the first round of singles play. Meanwhile, the duo of Giammarco Micolani and Redlicki, which finished No. 20, fell to Wake Forest’s No. 13 pair of Skander Mansouri and Christian Seraphim.

Briceno won the National Clay Court Championships as a junior and was ranked the No. 1 U.S. junior in each age group. He is also a Davis Cup Invitee, Eddie Herr Invitational finalist and US Open Jr. Championship participant. Briceno speaks three languages – Spanish, Portuguese and English – and is well traveled across the globe.

While at Florida, each of his teams finished as a top 10 ranked team with the 2005 team reaching the NCAA Tournament semifinal. The Gators also won the 2005 SEC regular season championship and finished second in the 2008 SEC tournament. Briceno served as a three-year team captain for the Gators, finishing with 104 singles career wins, fifth-most in Florida history, and 170 combined singles and doubles career wins, eighth-most in Florida history.