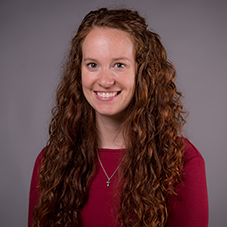 Set to begin her second season as the program’s assistant coach, former SEC Player of the Year and two-time All-American Sarah Rumely joined the Razorbacks’ coaching staff in March 2015. Rumely will join the program as the team’s assistant coach and recruiting coordinator having spent the past two seasons in the same capacity at Wake Forest University.

In addition to her coaching duties at Wake Forest, Rumely spearheaded the program’s recruiting efforts which resulted in three Demon Deacons earning All-ACC honors during the 2014 season. The accomplishment marked the first time Wake had three all-conference selections since 1999. Rumely worked primarily with the team’s setters and coordinated the offensive game plan.

Rumely’s first dip into collegiate coaching came at North Texas where she helped the team to 43 wins during her two-year stint in Denton, Texas, which included a record-tying 26 wins in 2012. Once again working with the Mean Green setters and coordinating the offense, Rumely coached three All-Sun Belt performers including the SBC Freshman of the Year in 2012. In her final season at UNT, the team advanced to the championship game of the Sun Belt Tournament.

The New Palenstine, Ind., native also brings a wealth of playing experience to her new position with the Razorbacks. In four seasons at Kentucky, Rumely was twice named an AVCA All-American including second-team accolades in 2009. She was a two-time member of the All-SEC First Team, was selected as the SEC Player of the Year in 2008 and named the SEC Freshman of the Year in 2006.

Rumely still holds the Kentucky program record with 5,703 career assists, which also ranks fifth all-time in the SEC. Away from the court, she was an Academic All-American in 2009 and was the 2010 recipient of the SEC Boyd McWhorter Postgraduate Scholarship. For all of her accomplishments, she was an NCAA Woman of the Year nominee in 2010.

Rumely has past playing experience with the USA Volleyball National Team program and played professionally in France before beginning her coaching career. She also has former ties as a club coach with Thoroughbred Elite Volleyball Alliance (TEVA) in Lexington, Ky., and Mean Green Juniors in Denton.