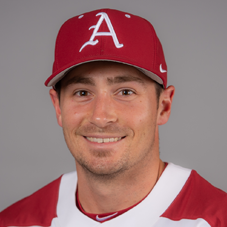 Former Tennessee standout and MLB Draft pick Taylor Smart wrapped his second season as the volunteer assistant for the Razorback baseball team in 2020.

Smart assisted coach Nate Thompson with the hitters, while working with the Arkansas catchers and leading the team’s baserunning. He also put together the scouting reports on Arkansas’ opponents.

In a shortened 2020 season, the Razorback offense was rolling, putting together a .310 batting average at the plate in 16 games. The Hogs were 17-for-20 in stolen base attempts (.850), while nailing opposing runners six-of-10 times.

A member of the Tennessee baseball program for the 2013 and 2014 seasons after transferring from Western Nevada College, Smart was a 26th round draft pick by the Seattle Mariners after his senior season and spent three years in the minor leagues as a third baseman.

Smart recently worked at Arizona under head coach Jay Johnson as the Wildcats’ graduate assistant. He was the camp coordinator for the Jay Johnson Baseball Academy and assisted in the day-to-day activities for the Wildcats. Prior to that, Smart was the student assistant at his alma mater for the 2017 season and worked with the infielders, hitters, as well as serving as the first base coach.

A native of Washington, Smart played two seasons (2011, 2012) at Western Nevada College prior to transferring to Tennessee. He led WNC to a 45-15 overall record and the Scenic West Conference championship in 2011. Smart recorded a .427 on-base percentage with 37 walks and nine stolen bases while hitting primarily out of the two-hole to earn All-Region and First Team All-Conference honors as a freshman.

In 2012, he led the team with 53 runs scored while posting a .407 on-base percentage with 34 RBIs and 12 stolen bases. He won All-Region honors again, claiming a spot on the second team and helped the Wildcats reach the 2012 JUCO World Series

Smart also tied his career-best six-game hitting streak (March 23-April 4) in which he was an impressive 11-for-24 (.458) with four doubles, five runs scored, one homer and eight RBIs.

After being selected by Seattle in the 2014 draft, Smart went on to play 44 games in the minor leagues with the Everett AquaSox at the Single-A Short Season level, tallying 12 RBI and 11 runs scored on 31 hits.

Smart graduated from Tennessee in 2017 with a degree in Sociology.