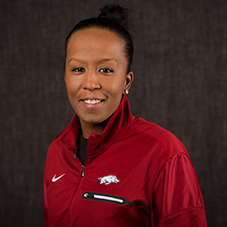 Yolanda McRae completed her sixth season as an assistant coach in 2021 for the Razorbacks, having joined the program with head coach Courtney Deifel prior to the 2016 season. McRae was part of Deifel’s coaching staff at Maryland. Along with her time at Maryland, the Dublin, Ga., native has previous experience at Georgia, Georgia Tech and Virginia.

McRae was part of the 2021 Razorbacks coaching staff that earned NFCA South Region Staff of the Year honors for capturing the school’s first SEC regular season title with a 43-11 (19-5 SEC) record. Arkansas also captured the No. 6 seed in the NCAA Tournament, the program’s highest tournament seed. McRae, who serves as the team’s hitting coach, oversaw the most powerful offense in program history as it set bests in home runs (95) and slugging percentage (.505). Infielder Braxton Burnside set the individual single-season program mark hitting 25 home runs, which tied for third nationally in 2021. Burnside and infielder Danielle Gibson were both named NFCA All-Americans.

In the shortened 2020 season, the Razorbacks earned a final ranking of No. 19 in the NFCA Coaches’ Poll. Arkansas finished the year ranked 13th in the nation in on base percentage (.421) and junior Hannah McEwen ranked 15th nationally with a .565 on base percentage. McEwen was recognized as a Softball America Shortened Season All-America Third Team selection. The Razorbacks ranked tied for fourth nationally in homers seventh in walks (208) and 23rd in slugging percentage.

McRae has guided the growth of outfielder Hannah McEwen, who in 2019 recorded a .386 average at the plate, the highest by any Razorback ever. McEwen finished the regular season McEwen started the season named to Softball America’s Top 100 Player Rankings and finished her sophomore campaign as a First Team All-SEC selection. She is only the second Razorback to earn first-team honors, and only 1-of-3 to garner All-SEC recognition in back-to-back seasons.

Working day-to-day with the Razorbacks’ hitters since her arrival in Fayetteville, McRae saw a 24-point increase (.260 to .284) from 2016 to 2017. Arkansas finished seventh in the SEC in batting average, up from 12th in the previous season. The offense also generated 54 more runs—in one fewer game—from season one to two under McRae’s watch.

Along with Maryland’s 16-win improvement in 2015, McRae helped the Terrapins’ offense take tremendous strides at the plate. The Terrapins hit .309 under McRae’s watch, a 40-point improvement from 2014, to go along with a jump from 20 to a program-record 69 home runs in 2015. With 339 runs, the team’s scoring was up more than 150 runs from the previous year.

McRae is no stranger to success in the Southeastern Conference as a former coach and student-athlete at Georgia. She spent the 2006 and 2014 seasons as a volunteer assistant at Georgia. During their 2006 season, the Bulldogs won the SEC East title and advanced to the NCAA Tournament. In her second coaching stint in Athens, McRae helped Georgia to the 2014 SEC Tournament title and an appearance in the Super Regional round of the NCAA Tournament. McRae was an outfielder for the Bulldogs in 2003 and was part of the program’s first-ever SEC regular-season title.

She spent the 2012 and 2013 seasons as an assistant coach at Virginia in which she guided the Cavaliers to increased offensive production. Compared to the season before McRae’s arrival, the UVA offense hit 17 more home runs—up to 29 from 12—during the 2012 campaign. McRae also coached Giannina Cipiolloni, the Cavaliers’ all-time leader in stolen bases. Under McRae’s watch, she registered 63 of her 89 career stolen bases.

McRae had two previous seasons at Maryland in 2010 and 2011 as an assistant coach. In that two-year span, Maryland tallied a 74-43 record with two appearances in the NCAA Tournament. During the 2011 season, the Terrapins posted the second-highest win total in program history with a 40-19 record which included a third-place finish in the ACC with a 12-7 mark. That same season, McRae helped lead four players to All-ACC accolades.

In her first role as an assistant coach, McRae spent three seasons (2007-09) at Georgia Tech where she helped lead the program to a three-year record of 132-62 (.680) and 216 home runs during her time in Atlanta. The Yellow Jackets hit a nation-leading 96 home runs in 2007 which, at the time, stood as the No. 9 single-season tally in NCAA history. Georgia Tech was an NCAA Tournament selection in all three years with McRae including a Super Regionals appearance in 2009.

McRae also coached a pair of Olympians at Georgia Tech with Caitlin Lever and Jennifer Yee representing their native Canada at the 2008 Olympics in Beijing. Yee led the Canadian National Team in batting average and posted the fifth-best overall batting average (.348) during Olympic competition.