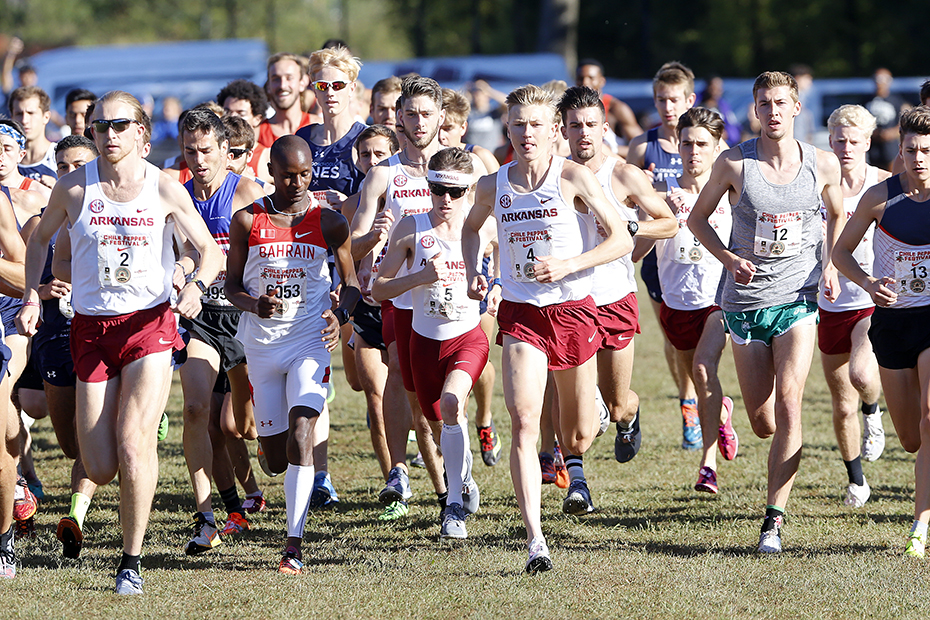 Conference Title No. 50 On The Line In Athens

“It’s a very important meet on our schedule, the beginning of our championships season,” head coach Chris Bucknam said. “Alex [George] and Jack [Bruce] seem to be our frontrunners right now and they’re both in great shape and are looking forward to the competition.”

The Razorbacks return four All-SEC runners from last season including conference champion Alex George, Jack Bruce, Austen Dalquist and Andrew Ronoh. Currently in the midst of their senior seasons Bruce, George and Dalquist look to cap their careers at Arkansas with a perfect record in league competition.

“It would be incredible to finish off my cross country career undefeated in the conference,” Dalquist said. “It would be a testament to our team, coaches and our ability to run our best races when it counts. There’s nothing like that feeling of calling the hogs on top of the podium as the rest of the conference watches.”

Bucknam Era
Charged with guiding the Razorbacks since 2008, head coach Chris Bucknam heads into his 10th league bout this weekend with seven titles to his claim. Prior to the rise of defending conference champion Alex George, Bucknam was responsible for the development of three other title-winning Razorbacks including Eric Fernandez (2011), Kemoy Campbell (2013) and Stanley Kebenei (2014).

Let’s Look at the Rankings
The 2017 SEC Cross Country Championship will be headlined by a pair of ranked programs in No. 16 Ole Miss and No. 27 Arkansas. In the most recent regional rankings the Razorbacks remain one of the top programs in the South Central region at No. 2 ahead of conference rivals No. 3 Texas A&M and No. 12 LSU.

8K Conference Leaders
All-American Alex George currently owns the second-fastest time (23:26.50) in the 8K this season, trailing Alabama’s Vincent Kiprop by .10 of a second. Right behind George on the 2017 SEC top 8K list is two-time All-American Jack Bruce whose PR of 23:28.90 earned him the No. 3 spot in the conference. Arkansas is the only program to have two runners under 23:30 at that distance this year.

SEC XC Meet Info
The 2017 SEC Cross Country Championships will begin at 9 a.m. CT with the men’s 8K race. The women’s 6K race will follow at 10 a.m. after which an awards ceremony will be held for the top individual performers and team champions.

Live results will be available for the meet through primetime timing. Additional information regarding the meet can be found at the SEC cross country championships central. Fans are encouraged to engage in the event on social media using the hash tag #SECXC.

A one-hour championships highlight show will also be available to watch on the SEC Network Sunday, Nov. 5 at 11 a.m. CT.