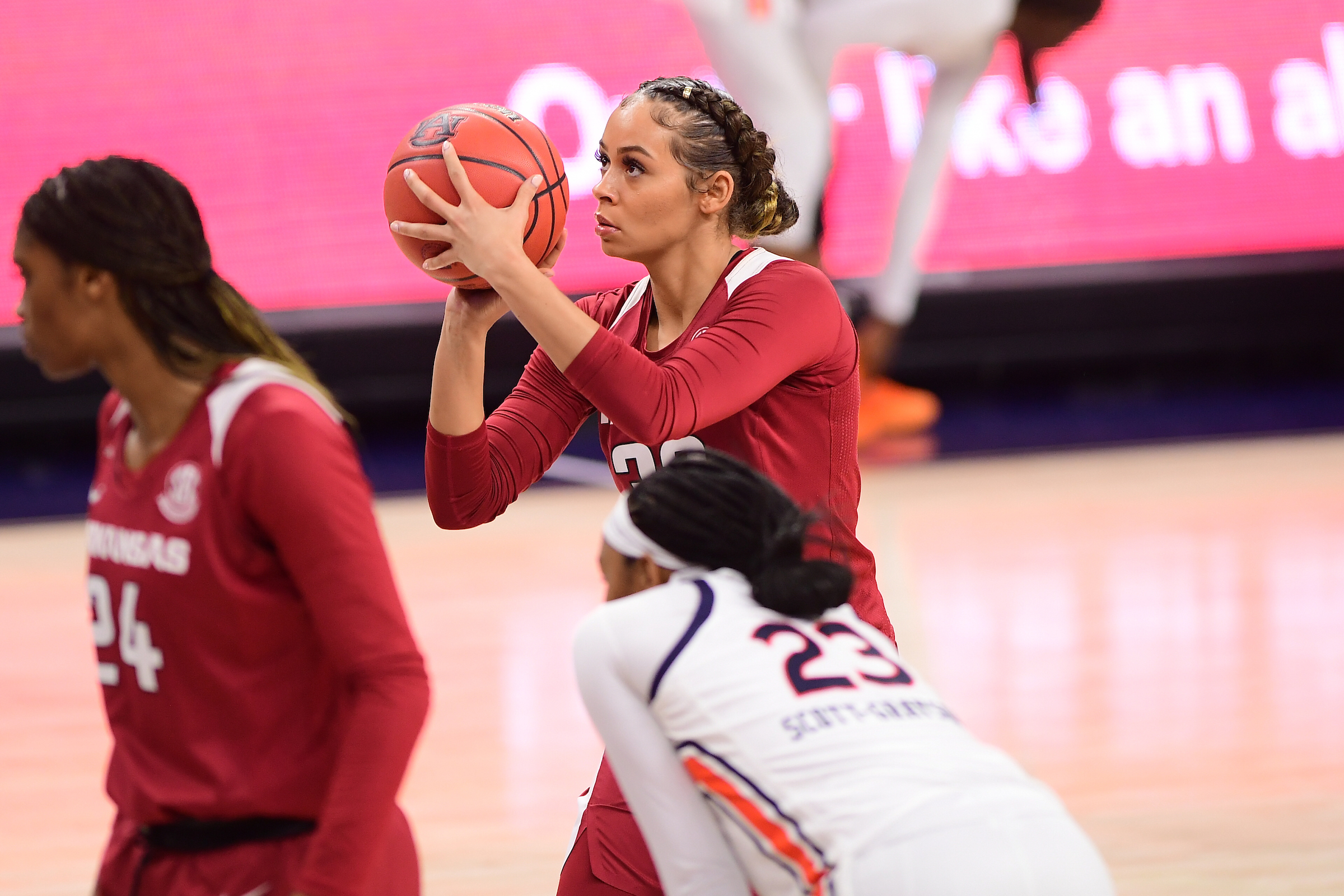 AUBURN, Ala.- No. 16 Arkansas (18-7, 8-6) earned a tight win over Auburn (5-17, 0-14) in Auburn Arena on Thursday night, beating the Tigers 74-69 in the regular season road finale. With the win, Arkansas has now won four straight, and seven of its last eight games dating back to January 28. The win also guaranteed Arkansas a winning record in the SEC this season, marking the first time in program history the Hogs have had back-to-back winning conference seasons.

Sophomore guard Makayla Daniels played hero in this one, scoring nine of her 11 points in the fourth quarter, including a dagger three off the dribble to put Arkansas up four late. After not seeing the floor much in the early parts of the game due to foul trouble, Daniels exploded late in the fourth, converting a three-point play chance before hitting two threes to put the Hogs ahead for good.

Redshirt senior guard Chelsea Dungee made history on the Plains, as her 12th point against Auburn put her collegiate point total ahead of Bettye Fiscus’ total of 2,073. With her 16-point performance, Dungee now has 2,078 career points, with 1,834 of them coming at Arkansas.

The first half was a defensive battle as neither squad was able to establish any rhythm offensively, with Auburn turning the ball over nine times in the first half and Arkansas shooting just 33 percent through the first 20 minutes. Auburn held the slim one-point at halftime, due in large part to Tigers’ senior Unique Thompson, who gathered 11 rebounds to start the game and finished with 18.

It was a different story in the second half as the Arkansas offense caught fire during the game’s crucial points. A Razorback push at the end of the third quarter trimmed a double-digit Auburn lead down to five heading into the final frame. And that is when the Hogs found their touch from deep. Arkansas went 5-9 from behind the arch in the fourth quarter, four of those coming from Daniels and Amber Ramirez, which contributed to a seven-point swing, bringing the Razorbacks from down three to up by four. The Arkansas defense stopped the Auburn offense to finish the game, holding the Tigers scoreless in the last four minutes, helping Arkansas escape Auburn with the road victory.

The Hogs head home for the regular-season finale, as Alabama comes to Bud Walton for Senior Day on Sunday. Tip is scheduled for 5 p.m. CT and the game will be broadcast on the SEC Network.