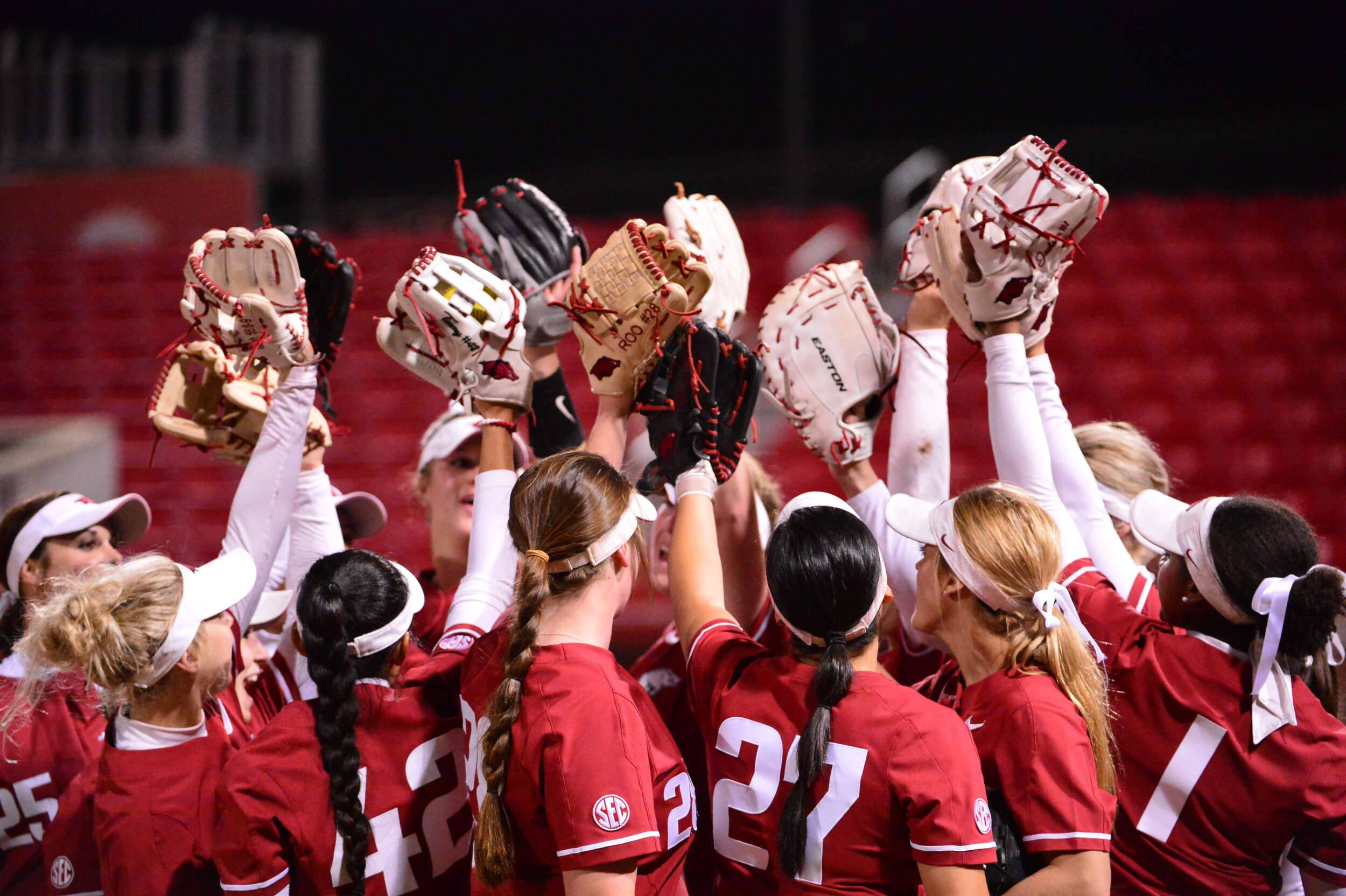 Head softball coach Courtney Deifel enters her fifth season at the helm of the softball team and is coming off another NCAA tournament appearance, the first coach to bring the Razorbacks to the tournament in three-straight years.

Storms returns for her final season in the cardinal and white after an all-star junior campaign. She’ll be joined on the mound by senior teammate Lauren Graves, junior Mary Haff and incoming freshmen Jenna Bloom and Rylin Hedgecock. Bloom comes to Fayetteville ranked No. 43 in the final FloSoftball Hot 100 while Hedgecock boasts a 1.1 ERA as a junior and senior and stands as the Lowndes High School strikeout record holder.

The other half of the battery will be led by junior Kayla Green and sophomore Taylor Greene. Green has started in 113 of 116 games over the course of her first two years at Arkansas and in 2019 helped the Hogs in giving up the least number of stolen bases in the SEC (11).

Deifel and her staff will look to lead Arkansas to another NCAA postseason appearance after compiling a 38-20 record in 2019. The Razorbacks batted .288 as a team, second best in program history and recorded 73 doubles, third best in Arkansas history and the most since 2010.

For the first time in program history, the ACC champions Florida State will be coming to Bogle Park. As a part of the six-game weekend, the Razorbacks will not only face the Seminoles, but also Baylor, Villanova and Kent State. The premier game of the weekend against Florida State will be on Saturday afternoon at 4:45 p.m. FSU boasts the most wins by any visiting opponent this spring after closing out a 55-10 season in 2019.

Anytime a conference opponent comes to town, you should be at Bogle Park. Georgia brings a team to Fayetteville that finished 42-19 in 2019, they made a trip to the Minneapolis Regional last year and secured two big wins over no.25 Drake before falling to host-team no.7 Minnesota in an elimination game. Arkansas will be looking for its first home-series win against the Dawgs since 2013.

Arkansas has only matched up against the Mean Green four times in program history, as UNT returns to Fayetteville for the first time since 2007. The Razorbacks have won three of the four match-ups, including a shutout-sweep of the Mean Green in 2017 in Denton. In those two road games, Arkansas outscored North Texas 18-0.

Host of the 2019 SEC Tournament, the Texas A&M Aggies finished 2019 at 28-27 overall and 6-18 in SEC play. They took the home series against Arkansas late in April before being selected to the Austin Regional where they dropped a close game to Houston and took no.9 Texas to extra-innings. The Hogs have only played the Aggies 21 times in program history and one of the two teams were ranked in the last 17 match-ups.

Florida is another tough SEC opponent, coming to Fayetteville as the reigning SEC Tournament champions. Finishing the 2019 season at 49-18 after sweeping through the Gainesville Regional then taking two out of three from no.12 Tennessee at the Super Regional. The Gators have been ranked in every game against Arkansas dating back to 2007, so the two teams are sure to battle it out in Bogle come April.

Razorbacks vs Tennessee – May 1 – 3 (Friday-Sunday)

Closing out the regular season for the Razorbacks, the Lady Vols will travel to Arkansas the first week of May. It was in Knoxville last year that Mary Haff recorded 15 strikeouts and former Razorback Katie Warrick hit a fourth-inning solo home run to help propel Arkansas to its 1-0 win over no.5 Tennessee to even the series, 1-1. The last time Tennessee was in Fayetteville (2017), the Hogs took game one and two of the weekend to secure the series win over no.14 Tennessee. It was the first series win over Tennessee since 2002.

Visit ArkansasRazorbacks.com for the latest information on all things Arkansas Softball. You can also find the Hogs on social media by liking us on Facebook (Arkansas Razorback Softball) and following us on Twitter and Instagram (@RazorbackSB).