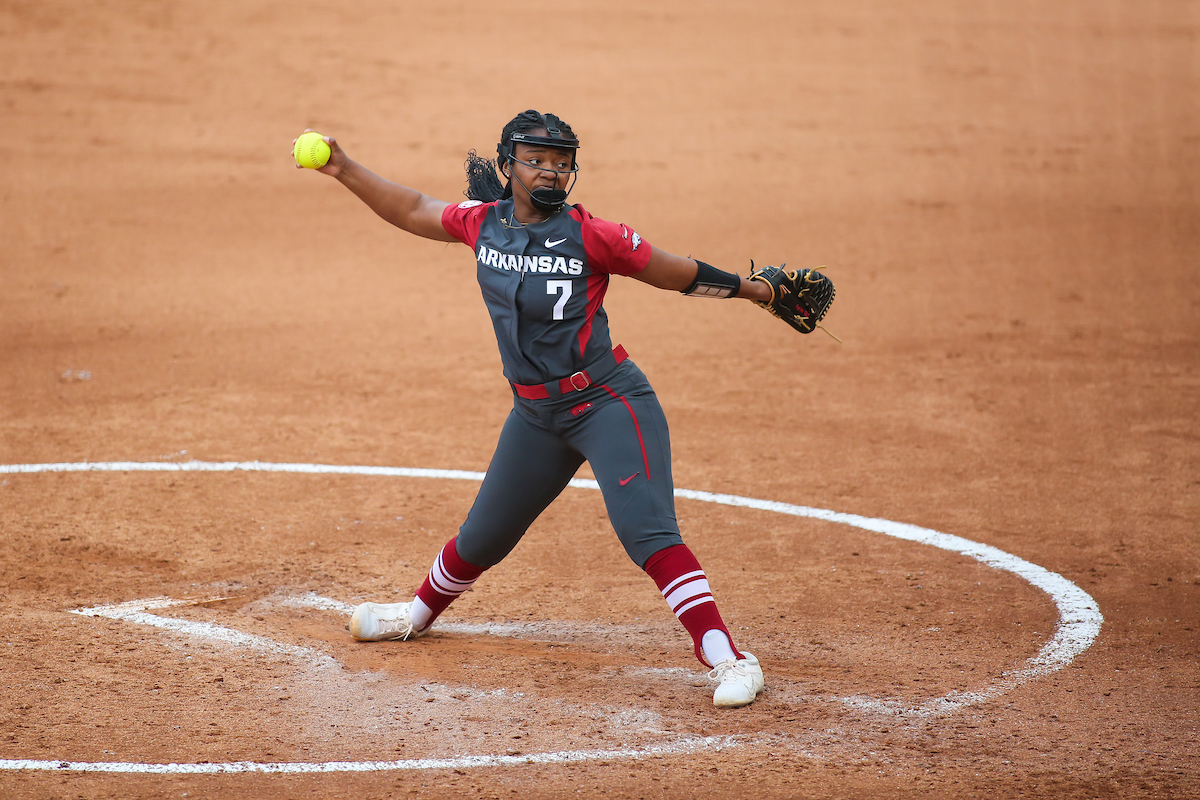 FAYETTEVILLE, Ark. – Junior Chenise Delce tossed a nine-strikeout gem to propel No. 6 Arkansas to its ninth-consecutive win, downing No. 12 Kentucky, 2-1, in Friday’s series opener at Bogle Park. The win also marks the Hogs’ fifth-straight win against a ranked opponent.

“We had a pitcher’s duel today,” said head coach Courtney Deifel. “Both teams played very well. Our defense and Chenise were exceptional. They carried us and gave us a chance.”

Arkansas improves to 31-7 and 10-3 in conference play. The Razorbacks are now 6-1 at home against conference opponents.

Chenise Delce (10-2) went the distance for the Razorbacks, tossing her sixth complete game of the season while handing out nine strikeouts. The right-hander from Oklahoma City, Okla., dazzled in the circle, spinning six scoreless innings and curbing the Wildcats to six hits. Delce recorded at least one strikeout in six of her seven innings. The Razorback defense shined in an errorless effort, making several big-time plays down the stretch.

Momentum shifted in favor of Arkansas several times due to critical two-out web gems in the outfield by senior Hannah McEwen and freshman Kacie Hoffmann. In the top of the seventh and a runner at third, Audrie LaValley perfectly played a hard chopper for the game’s final out.

Offensively, senior Danielle Gibson and sophomore Hannah Gammill had pivotal hits to drive in the Hogs’ two runs. Gibson went 1-for-3 with an RBI double in the first. Gammill hurled a solo home run in the fourth to give the Razorbacks a permanent lead. KB Sides went 1-for-2 with two stolen bases and a walk at leadoff. McEwen doubled to left center in the first and was later brought in for the Razorback’s first run of the game on Gibson’s double. Hoffmann and Linnie laced a hit each with Hoffmann’s being a double to left and Malkin’s a single through the 5-6 hole. LaValley tied her season-high in walks with two.

Kentucky and Arkansas were both scoreless in the second before the Wildcats evened it at 1-1 in the third.

The Razorbacks got their final run of the night in the fourth on Gammill’s solo blast to center.

A reminder that Kacie Hoffman is a FRESHMAN and making plays like this pic.twitter.com/mQCDEnI2TB

Arkansas will look to clinch the series against Kentucky at 7 p.m. Saturday. The game will be nationally televised on ESPN2.