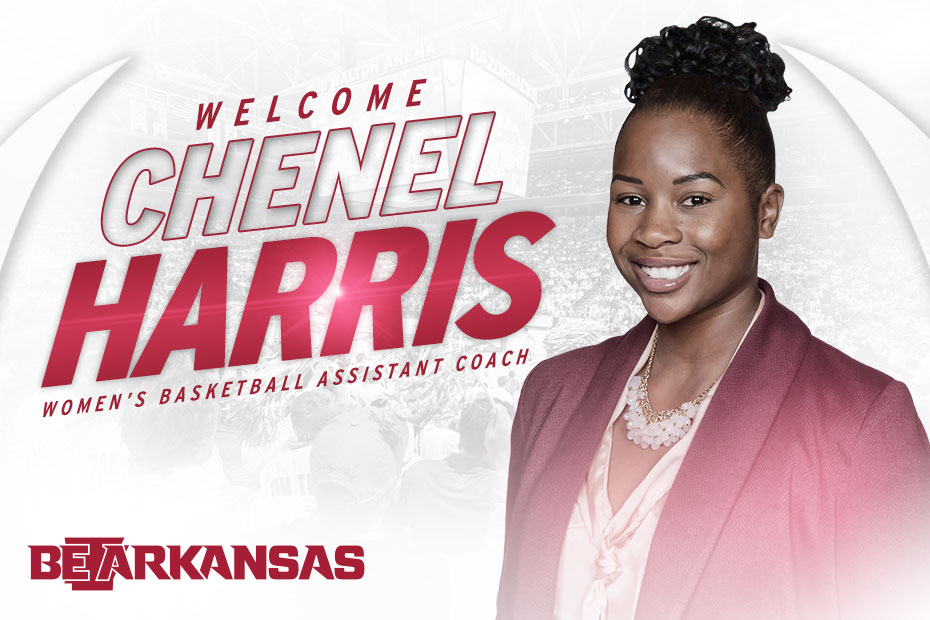 FAYETTEVILLE, Ark. – University of Arkansas women’s basketball head coach Jimmy Dykes announced the hiring of Chenel Harris Wednesday, citing the up-and-coming coach’s energy and enthusiasm and the qualities that made her stand out.

“It was the common thread in all the conversations I had about Chenel,” Dykes said. “She brings a level of energy and enthusiasm that will be contagious. She is a great fit with our staff and I’m confident our players will respond to her energy right away.

“Chenel has recruited all over the country and, as a native of Toronto, Canada, brings an international connection to our program. We can’t wait for her to get to campus and start with our program.”

Harris, a native of Ontario, Canada, has made coaching stops at Robert Morris and, most recently, Stony Brook. While with the Seawolves, Harris served as the team’s recruiting coordinator, bringing top talent to campus and establishing relationships with high school and AAU coaches.

“I am privileged and grateful to be a Razorback,” Harris said. “The University of Arkansas women’s basketball program has a rich history of success as well as a promising future. I know that Jimmy Dykes and the staff are committed to winning at the highest level and they are working to develop young women who are educated, confident, resilient, and successful both on and off the court. I’m excited to assist Coach Dykes and the women’s basketball program in realizing their goals.”

In addition to her work at Stony Brook, Harris worked with the post players as a position coach and was responsible for the skill development of the team’s forwards in the pre- and postseason.

She also was instrumental in developing “So You Want To Be A Coach”, a WBCA program designed to help college women’s basketball players prepare for a career in coaching.

Harris earned her degree in business management from Kent State in 2010.