ROLAND – Mateo Fernandez de Oliveira fired a 2-under-par 70 for the third straight round and was tied for the lead after 54 holes. The junior reeled off three pars in a playoff Tuesday afternoon to seal his first career collegiate win. His play helped Arkansas finish runner-up through stroke play at the inaugural Jackson T. Stephens Cup, played at Alotian Golf Club (par 72, 7,400-yards).

Arkansas will face stroke play winner Notre Dame Wednesday in match play to determine the Stephens Cup team champion. The Fighting Irish carded an 8-under-par 856 and the Razorbacks improved two spots to finish second with a total of 876. Florida State and Arizona tied for third (880) followed by Alabama (885) and San Diego State (890).

Fernandez de Oliveira entered the day tied for second and was even at the turn with two bogeys and two birdies. He started the back nine with three pars before back-to-back birdies on his 13th and 14th holes – the par-3 5th and par-4 5th. The junior had two chances to close out the title in regulation but settled for par.

In the meantime, a pair of Notre Dame players were tied for the lead with three holes to play. Palmer Jackson birdied the par-4 15th to get to 6-under along with Fernandez de Oliveira. Taichi Kho, the leader through round two and most of round three, suffered back-to-back bogeys on holes 15 and 16 to fall one stroke behind Jackson and Fernandez de Oliveira. Jackson finished with three pars to force the two-man playoff. 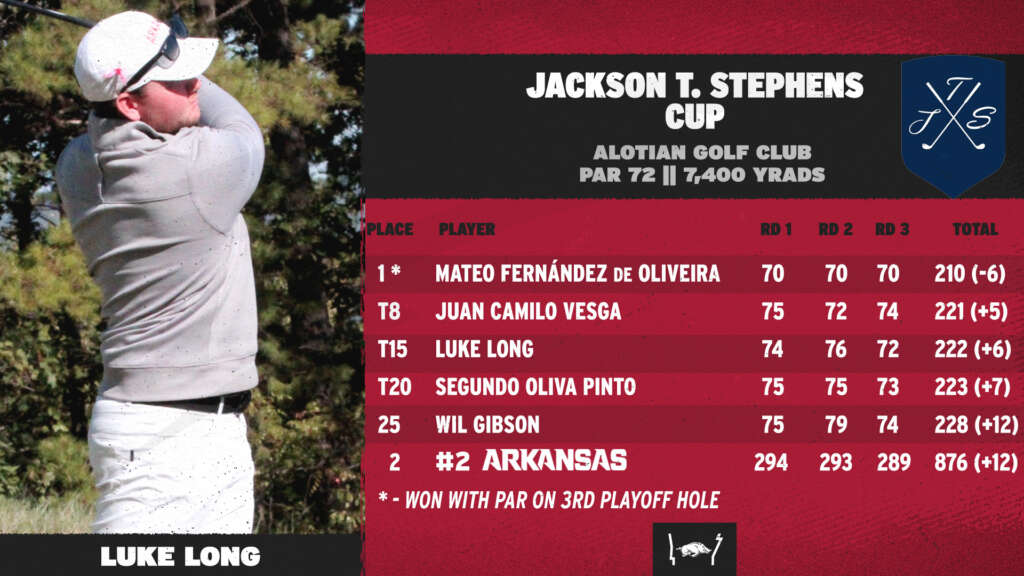